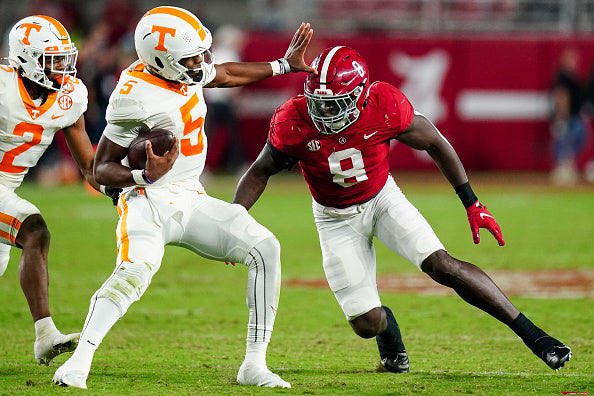 The best way to measure one conference up against another is to look at non-conference. The 2022 SEC non-conference schedules are all over the place. The SEC is often regarded as the top conference in all of college football. Agree or disagree, the conference boasts 12 of the last 16 National Titles between five different teams (Bama has six, LSU has two, Florida has two, Auburn has one, Georgia has one).

In this series, we will continue to look at each team’s out-of-conference slate and rank them based on difficulty. There are some teams who have serious gauntlets. Other teams have a cakewalk. Since #ItJustMeansMore, every SEC team has at least one FCS foe on their schedule; some in November!

Tennessee: vs Ball State, @ Pitt, vs Akron, vs UT-Martin (FCS)

Quite possibly the easiest of the SEC non-conference schedules belongs to the Tennessee Volunteers. Last year, Tennessee went (7-5) and won three of its four non-conference games which would likely have been ranked high in a similar fashion last year. Hendon Hooker is back for more and career journeyman Bru McCoy hopes that fourth time is the charm.

The first on the schedule is Ball State. The Cardinals finished just (6-7) last year in the uber-competitive MAC West, capped off with a 51-20 bludgeoning loss to Georgia State. Even then, if Tennessee isn’t an above-average SEC team, they’ll be too much for Ball State. Pitt will be coming off of an ACC Title. However, they lost their quarterback and Biletnikoff award-winning wide receiver. They get Kedon Slovis from USC but Tennessee will be looking to avenge last year’s 41-34 loss.

Led by Will Rogers and Mike Leach’s offense, Mississippi State finished the 2021 season at (7-6) after losing 34-7 to Texas Tech. As with Tennessee, MSU won three of its four non-conference games.

That one loss? Memphis. The Bulldogs traveled to Memphis and fell, 31-29. Their conquest for revenge should be a bit easier as the Tigers will have to replace its quarterback and two top receivers. If you like points, this may be the game for you.

Arizona is, to put it bluntly, not a good team. Neither team in the state of Arizona will be good but the Wildcats will struggle. This should be an easy win. Bowling Green’s offense was about as anemic as any in the nation last year. They have playmakers for a MAC team, but, again, this should be an easy win. As the owner of a Bowling Green and Toledo-focused site, I wouldn’t mind an upset here, though…

Finally, the real test. Eastern Tennessee State (FCS) comes to town in the second-to-last week of the season, as is SEC custom.

LSU: vs Florida State, vs Southern (FCS), vs New Mexico, vs UAB

Brian Kelly says Kayshon Boutte has the potential to be best WR in CFB but wants to see more:https://t.co/5WcCLYcJvL pic.twitter.com/McFgcv2IXj

LSU has gone through plenty of change since we last saw them. Brian Kelly takes over, Jayden Daniels transfers in, and the Bayou Bengals are primed to get back to where they believe they should be. Will LSU challenge Alabama in the SEC East? With one of the easiest SEC non-conference schedules, they’ll certainly have a shot. They have one of the best receivers in the nation in Kayshon Boutte.

When the two scheduled this matchup, LSU and Florida State were in very different places. LSU was just coming off of the best year in CFB history and Florida State, well maybe they were where they are now. They lost to Jacksonville State (FCS) last year. LSU should be able to take this matchup of almost-bluebloods.

New Mexico is very similar to its rival, NMSU. They just are not good and won all of three games last year. LSU will get through them on talent alone. Finally, in the second-to-last matchup of the year, UAB comes to town. While the Blazers should be good and won’t take a loss lying down, it would take a lot for LSU to lose here.

One of the surprises of last year, the Ole Miss Rebels finished with 10 wins and three losses: Alabama, Auburn, and Baylor in the Sugar Bowl. Matt Corral is gone, so incoming transfer Jaxson Dart gets to battle with Luke Altmyer for the job. Lane Kiffin has a strong squad again and likely will not face much opposition with the fourth-easiest of the SEC non-conference schedules.

The Ole Miss season kicks off with Troy. Now, the Troy Trojans look like they will be a better team in 2022 than they were in 2021, but with just five wins last year, there has to be a massive leap if they want to compete with this Rebels team.

Georgia Tech is still a midling ACC team. While they may have a pretty solid quarterback, the rest of the roster has yet to catch up and the Yellow Jackets will finish towards the bottom of the conference. Finally, Tulsa was a seven-win team last year but resides in one of, if not the toughest G5 conference. Ole Miss should be able to run through their non-conference slate again.

The Missouri Tigers were a frustrating bunch in 2021. After a loss to Army in the Armed Force Bowl, Mizzou ended up with a (6-7) record and a whole lot of questions. Out of conference, Mizzou won three of four with that lone loss at Boston College in overtime. It’s Brady Cook‘s team and he’s going to have plenty of new faces on offense to play with.

To start, Louisiana Tech was a three-win team in 2021 in the Conference-USA. Missouri should not have an issue starting off (1-0). Kansas State could be a fun matchup, however. The two haven’t faced off since 2011 when they shared the Big 12. The Tigers will have to limit Duece Vaughn’s impact or else it will be a long day.

As the penultimate game on the schedule, Mizzou will have a cakewalk through quite possibly one of, if not the worst teams in the FBS.

Alabama. Bryce Young. Will Anderson, Jr. Jahmyr Gibbs. Nick Saban. Alabama could play Clemson, Ohio State, and any other top-tier team out of conference and still manage to be great. They’re favorites to win it all again and for good reason. Now that we are in the middle of the SEC non-conference schedules, it’s all about splitting hairs.

Utah State won the whole Mountain West after shellacking San Diego State in the Title Game. They return prolific quarterback Logan Bonner and running back Calvin Tyler, Jr. but lost all three top receivers. The Aggies will be good again this year but starting off against Alabama is just mean.

Alabama has had a recent run of facing off against has-been bluebloods early in the year but this year they travel to Austin, Texas in a true road game. Bijan Robinson is one of the best running backs in the game and Texas is led by former Alabama offensive coordinator, but this should still be a multiple-score win for the Tide. Louisiana-Monroe was a four-win team last year and will not do much to stop Alabama.

And the matchup everyone is waiting on: Austin Peay (FCS) at Alabama on November 19th, a week before the Iron Bowl.

Finally, Vanderbilt. Vandy has been the literal worst SEC team for years now and it will not end in 2022. Last year, the Commodores won just two games, both out of conference.

To kick off the year, Vandy gets to travel 4,331 miles to take on the Hawai’i Rainbow Warriors. That trip will be awful but the silver lining is the fact that Hawai’i had a mass exodus via The Portal. It’s going to be a long year for Hawai’i. Wake Forest will be a tough out, however. They very nearly took the ACC last year and look to be just as strong in 2022.

Finally, the MAC Champions, Northern Illinois. They lost a bit and are not currently favored to repeat but they’ll be good. It’ll be a nice litmus test for the conference for one of their best to face off against the worst of the SEC.

College Football Runs Through the SEC

I’ll continue to give the SEC grief over taking the easy way out of scheduling FCS teams in November until they quit. However, it has to be recognized that the top of the SEC is greater than just about anything else in the nation. From this list, Alabama will likely look the best. LSU is a fun pick to come back but it’s still Alabama.

How difficult of a non-conference schedule does the defending Champs have in Georgia? We’ll soon find out.