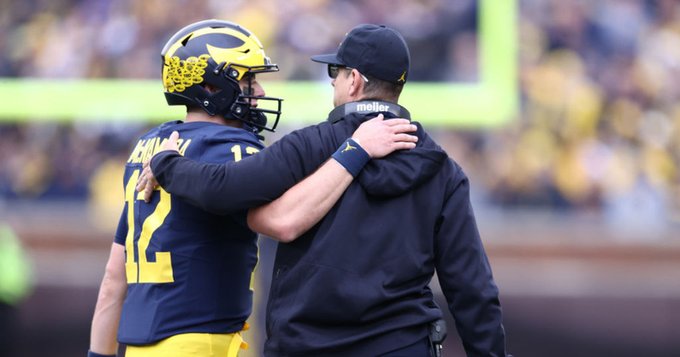 In this series, we will continue to look at each team’s out-of-conference slate and rank them based on difficulty. There are some teams who have serious gauntlets. Other teams have a cakewalk.

Michigan: vs Colorado State, vs Hawai’i, vs UCONN

Another heated QB battle is underway between Cade McNamara and JJ McCarthy at Michigan.

Lines have been drawn in the sand for well over a year with many fans.

Let’s break it down by looking at who has the edge in key categories:https://t.co/oqzPJt1Odi pic.twitter.com/PKgluye65L

Last year, Colorado State finished just (3-9) in the Mountain West. They did manage to beat San Jose State, Toledo, and a horrid New Mexico State team, but still lost to the likes of San Diego State (FCS). Hawai’i lost at least 22 players to The Portal and will be severely weakened this year. Finally, UCONN is still UCONN: a borderline FCS team.

Even in the annual cross-over games with the B1G West, Michigan’s toughest in-conference game is at Iowa. As a team hoping to get back to the CFP and defend its B1G title, the Wolverines couldn’t have asked for an easier route. Are you team Cade McNamara or J.J. McCarthy?

Northwestern: vs Duke, vs Southern Illinois (FCS), vs Miami (OH)

It’s an even year, so the Northwestern Wildcats are due for a winning year, right? As they were in 2020, the Wildcats are coming off of a (3-9) season and did not look great. In their three wins, Northwestern beat Indiana State (FCS), Ohio (bad, bad MAC team), and Rutgers (Rutgers). Former South Carolina quarterback Ryan Hillinski led the way last year and will get another shot this year. On defense, the Wildcats will have a handful of new faces thanks to the Transfer Portal.

After taking on Nebraska in Week 0 in Dublin, Ireland, Nebraska gets to exact revenge in the Nerd Bowl against Duke. The Blue Devils won last year, 30-23 thanks to a huge 30-7 halftime lead. Following a bout with Southern Illinois (FCS), Northwestern plays host to Miami (OH). The Redhawks struggled last year after winning the MAC in 2020. They lost their leading receiver from last year, so it’ll be something to watch and see if Brett Gabbert can respond.

It was a disappointing 2021 for the Wisconsin Badgers with four losses, one of which was out of conference to Notre Dame. Graham Mertz will have another opportunity to follow up his exciting freshman year in 2020. He does get to play and hand it off to one of the best running backs in the nation, Braelon Allen.

The Badgers kick off the year with a primetime bout against Illinois State (FCS). After that warm-up, Washington State comes to town. Of the three out-of-conference games, Wazzu should be the most difficult. They finished with just seven wins last year amid all of the…ahem…controversy surrounding the coach. Even if they are better, I don’t give them a shot to win here.

Finally, New Mexico state has been in the same vein as its Independent peers in UMASS and UCONN. Wisconsin should have a solid three wins before traveling to Ohio State. Even if they drop the game against the Buckeyes, the CFP and B1G dream is not over.

Through its first three quarters, the Golden Gophers were looking good. They led Ohio State 14-10 at half and running back Mo Ibrahim was balling with 163 yards and a touchdown. Then his injury derailed everything. After losing Ibrahim, Minny finished (9-4) but dropped one of its three out-of-conference games to Bowling Green.

As is the case with each of the four easiest Big Ten non-conference schedules, all three of Minnesota’s non-conference games are at home. Good thing for them is they don’t face one of the bottom teams in the MAC again. They do face New Mexico State who could be even worse. Then, they play Colorado again. Last year, the Golden Gophers took the contest in Boulder, 30-0. With a healthy Ibrahim, and Treyson Potts spelling him, Minny should have an easy three wins heading into Big Ten play.

After finishing 2021 (9-4) capped off with a thrilling bowl win over Tennessee, Purdue had its best season since 2003. The Boilermakers won two of their three non-conference games, only losing to Notre Dame, 27-13. Quarterback Aidan O’Connell returns for one more year after passing for 3,712 yards and 28 touchdowns last year. He finished with third-most passing yards in the B1G despite not being the initial starting quarterback.

Syracuse won just five games last year. In a battle of middling P5 teams, this game will likely provide a good litmus test to gauge the program. The Orange do have Sean Tucker at running back, so it’ll be a challenge to contain him.

Finally, Florida Atlantic was a five-win team in 2021. FAU has only ever beaten a P5 program once: Minnesota in 2008. Even if Purdue is not a winning program in 2022, they should be able to take care of business.

In 2021, Rutgers had its best season since 2014…with five wins. Of those five wins, however, three came out of conference. Quarterback Noah Vedral returns for his sixth season of eligibility and he will have about six new offensive toys to pay with thanks to coach Greg Schiano’s work in the Transfer Portal. Expectations are higher for the Scarlet Knights but they still reside in one of the toughest divisions in football.

They kick off the year against former Big East rival, Boston College. Led again by Phil Jurkovec, the Eagles finished at the bottom of the ACC Atlantic division with six wins. Of their three non-B1G games, this will be the most difficult for the Scarlet Knights. Lastly, Rutgers travels to Temple. Last year when Temple came to town, Rutgers won easily, 61-14.

Mel Tucker’s rebuild took all of one season and now the Michigan State Spartans look poised for another NY6 Bowl. Last year, Sparty literally ran through it non-conference slate which included Miami (FL) and the best statistical offense in CFB, Western Kentucky. After Kenneth Walker III rushed his way to becoming a Heisman Finalist after transferring in. Jerek Broussard and Jalen Berger transfer in from Colorado and Wisconsin to replicate that success.

Western Michigan finished with eight wins last year, one of which was against the Spartans’ Peach Bowl foe and “we would win the B1G yearly” team, Pitt. The Broncos have to replace quite a bit on offense and will likely not be a challenge for the Spartans this year. Also residing in the MAC is Akron. The Zips, however, will struggle this year. They are not projected to succeed this fall even though there is a feeling that the program is moving in the right direction.

Finally, a trip to Washington rounds out the non-conference slate. Last year, the Huskies fell to Montana (FCS). It may be a long year for them yet again.

Living in the B1G Time

The Big Ten has been a seemingly top-heavy conference for a while. Last year, however, it was a bit stronger from top to bottom. And, for the first time since 2016, a non-Ohio State team won the conference. 2021 was a crazy season.

Now, fans can look to the future as USC and UCLA are set to join the fray in 2025 from the PAC-12. Move over everyone, the Big Ten has become the “Conference of Champions.”*