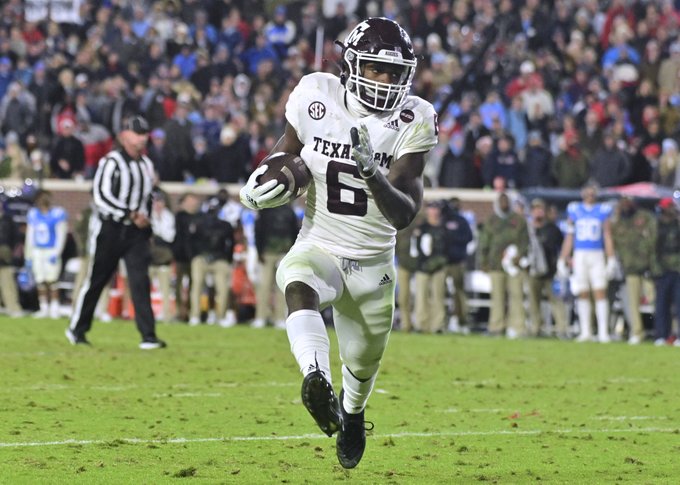 The best way to measure one conference up against another is to look at non-conference. The 2022 SEC non-conference schedules are all over the place. The SEC is often regarded as the top conference in all of college football. Agree or disagree, the conference boasts 12 of the last 16 National Titles between five different teams (Bama has six, LSU has two, Florida has two, Auburn has one, Georgia has one).

In this series, we will continue to look at each team’s out-of-conference slate and rank them based on difficulty. There are some teams who have serious gauntlets. Other teams have a cakewalk. Since #ItJustMeansMore, every SEC team has at least one FCS foe on their schedule; some in November!

As the only team to beat Alabama in the regular season, expectations remain high for the Texas A&M Aggies after finishing (8-4) and pulling out of the Gator Bowl. Last year, they easily swept their non-conference slate. To say this is the most difficult of the SEC non-conference schedules is difficult because, 1. the SEC does not have many difficult out-of-conference games and 2. all four are at home.

They’ll have to replace a lot on offense but Devon Achane returns as one of the best back in the conference. After a scrimmage against Sam Houston State (FCS), Appalachian State comes to town. As Group of 5 teams go, Appalachian State is a good one. While the Aggies should win this one, it would behoove them to not overlook the Mountaineers as so many have done before.

Miami (FL) has yet to return to its former glory but there’s a new feeling surrounding the program with Mario Cristobal at the helm. Tyler Van Dyke is a legitimate NFL draft prospect and the U looks like they will contend in the ACC. Finally, as is custom, UMASS comes to town as a tune-up in late November as A&M prepares for LSU.

We may get a taste of A&M’s ridiculous 2022 recruiting class this fall. It’s the best that money could buy, so Jimbo Fisher’s excuses will start to run out. The last time A&M won even a division was (technically) in 2010 as a member of the Big 12 South. They haven’t won a conference since 1998.

The second-most difficult of the SEC non-conference slates belongs to the team that very nearly put the CFP on its head last year. After scoring over 60 against Akron and an FCS team, Auburn fell to Penn State and was trailing Georgia State 24-12 at half before rattling off 22 unanswered points. Former Texas A&M quarterback Zach Calzada will be in a tight, three-way battle with former Oregon quarterback Robby Ashford and former LSU quarterback T.J. Finley.

The bad news is that this battle may not be decided by Week 1. The good news is they face Mercer (FCS), so they can use it as a final test. Week 2 will be more difficult, however. San Jose State had a down year in 2021 after a near-perfect 2020. Chevan Cordeiro is going to be a stud for the Spartans this year.

The Tigers will get a chance to avenge its loss to Penn State this year. They took a step back in 2021 but they still have one of the most experienced quarterbacks and a running back room full of highly-rated recruits. Finally, the week before the Iron Bowl, Western Kentucky comes to town. Of course, WKU is a Conference-USA team and they have to replace the most prolific quarterback in college football, but they’ll be tougher than anticipated.

Arkansas: vs Cincinnati, vs Missouri State (FCS), @ BYU, vs Liberty

Here’s a look at the SEC leaders in catchable pass rate this season, both overall and by distance downfield.

K.J. Jefferson led the way, and was especially accurate when given the opportunity to throw downfield. pic.twitter.com/3xFTl6Fug6

One of the surprises from last year the Arkansas Razorbacks will be looking to improve upon its (9-4) record from last year. They swept through their non-conference – including a win over Texas. K.J. Jefferson and Raheim Sanders return but they’ll have to replace first-rounder, Treylon Burks.

Last year, both Cincinnati and Arkansas played Alabama. Cincy lost, 26-7, and Arkansas lost, 42-35. Now the two face off right away. Cincinnati graduated plenty of talent but Luke Fickell has shown what a coach he is and they’ve recruited well. This is going to be a good one.

The lone away game on this non-conference slate is at BYU. The Cougars have been on a tear recently and will be good yet again this fall. Both Cincinnati and BYU are going to be making the transition to the Big 12 on a high note. Finally, Liberty was a lot of fun last year with Malik Henry. This year, Charlie Brewer comes to town from Utah and will lead the Flames.

Kentucky: vs Miami (OH), vs Youngstown State (FCS), vs Northern Illinois, vs Louisville

There was only one team in the SEC East that made Georgia sweat a little bit and it was this Kentucky Wildcats team. They burst out of the gate with six straight wins, then lost three in a row, then won three in a row. Will Levis is back for more and this team will certainly be better than expected.

After winning the MAC in 2020, Miami (OH) failed to repeat in 2021. They finished with just seven wins and have to replace receiver Jack Sorenson. Brett Gabbert, however, could be one of the best quarterbacks in the conference. Later in the year, the defending MAC Champions do come to town. Northern Illinois has been the cream of the crop in the conference for over a decade. Quarterback Rocky Lombardi is back yet again with his favorite targets as well. The Huskies are going to be a leading candidate to repeat as MAC Champs.

In the final week of the year, Kentucky and Louisville face off. The two have faced off yearly since 1994 and, including the six UK wins before then, Kentucky holds an 18-15 lead in the all-time series. They’ve won each of the last three but this year will be closer than those three. Malik Cunningham is a game-changer.

Last year was a whirlwind of a year for the Florida Gators. After a weak (6-6) regular season, Florida lost to UCF for the first time in history, effectively losing control of the Sunshine State. After hiring Billy Napier, there is new excitement in Gainsville. Anthony Richardson looks to be the man at quarterback and running back Montrell Johnson, Jr. follows his coach from Louisiana.

By far the toughest out-of-conference game on this schedule is Utah. The Utes, once they made the switch to Cam Rising at quarterback, turned into one of the hottest teams in the nation. They took the Pac-12 and very nearly won the Rose Bowl over Ohio State. Expectations are very high with many calling for the Utes to make the CFP. If Florida is for real this year, they’ll have a chance to prove it early on.

UF will have a chance to take back the state with two in-state rivals. First off, USF. South Florida is not quite UCF but former Baylor quarterback Gerry Bohannon will have the Bulls in a better spot in 2022. Capping off the year, Florida travels to Florida State for the 66th time in history. The Seminoles have been down lately and Florida has won each of the last three.

Georgia: vs Oregon, vs Samford (FCS), vs Kent State, vs Georgia Tech

11 preseason questions I have about the 2022 Georgia Bulldogs https://t.co/U8Ge8NH8Mh

Normally, the defending champion having one of the hardest SEC non-conference schedules would be cause for worry. Considering how dominant the team was last year, they should be fine even with the talent that departed. Stetson Bennett is back to lead the offense and the country is going to be really acquainted with Jalen Carter on defense. Will Georgia have the division locked up by Halloween again?

Week 1 rolls around and Oregon comes to town. It may not be a true home game for UGA but the game is in Atlanta, so it’s essentially a home game. The Ducks stunned Ohio State last year and got an upgrade at quarterback with Bo Nix. Nix threw for 217 yards and an interception while at Auburn against this Bulldogs defense. As with Utah, Oregon has CFP aspirations and they’ll be looking to unseat the defending champs.

At this point, it’s about the lone strong team on the non-conference schedule…and that was Oregon. Kent State has to replace Dustin Crum but they still have one of the best receivers in the MAC in Dante Cephas. Last but certainly not least is the Georgia-Georgia Tech rivalry game. Even though it’s a rivalry game and you can usually throw out the records, this should not be much of a contest.

Finally, the University of South Carolina Gamecocks. South Carolina had an unremarkable (7-6) year capped off with a win in the battle of Carolinas in the Duke’s Mayo Bowl. SC won three of their four non-conference games and Shane Beamer’s squad is looking to be better this year. Spencer Rattler transfers from Oklahoma to help rattle off a few victories and surprise in the SEC.

To start, on paper, their matchup with Georgia State looks benign. However, the Panthers won eight games in the Sun Belt and run. the. ball. They had three players rush at least 100 times on the year and they all return. Last year, SC was 94th in the country allowing 175 yards per game on the ground whereas GSU was eight in the country rushing for 230 yards per game.

Charlotte should not be much of a game, fortunately for South Carolina. They finished with just five wins last year and will be no match for any SEC team. The Gamecocks finish the year at Clemson. The Tigers look like they could be coming down from their elite pedastle but make no mistake, they are talented. Even though they lost their coordinators, their defense will be elite. The two have played 118 times. Clemson owns the overall record, 72-42-4 and are winners of the last seven.

Again, despite how much crap I love to give the SEC for their less-than-stellar non-conference scheduling, they are the top conference in the nation. The odds are that they will at the very lest represent the conference in the CFP National Championship Game.

It will be interesting to see how Texas and Oklahoma fare right away when they join in 2025. Will they immediately compete as Missouri did or will it be more of Texas A&M where they fail to do anything? Time will tell!