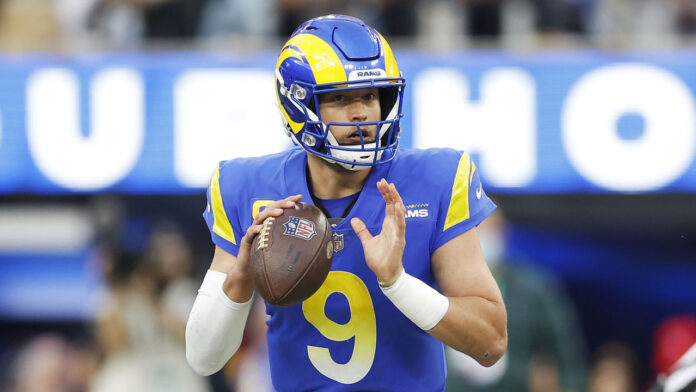 We’ve finally made it! NFL week 1 is near and it all starts this Thursday when the Buffalo Bills travel to take on the defending champion Los Angeles Rams. These are the two premier teams in the league and could possibly be a Super Bowl preview. This is just one of many great matchups to watch in NFL week 1 as we are set to kick off the best time of the year in a couple of days.

These two teams will kick off the 2022-23 season on Thursday Night Football and it quite possibly might be the best game of NFL week 1. The Los Angeles Rams are coming off a Super Bowl victory while the Buffalo Bills come into this season as the favorites to win it all.

As mentioned, the Bills come into this season as Super Bowl favorites and why wouldn’t they be? They have the MVP favorite at quarterback in Josh Allen, who leads an explosive offense with Stefon Diggs, and one of the best defenses in the game over the past several years. The Bills also added Von Miller, who played a key role in the Rams’ Super Bowl win.

They finished 11-6 last season and were thought to be a team to go all the way but they fell in heartbreaking fashion when Patrick Mahomes led his team into field goal range in just 13 seconds to send the game to overtime, which led to an eventual winner. The Bills have revenge on their mind and what bigger test than the defending champs in week 1?

The Rams made it to the Super Bowl in the 2018 season with Jared Goff at quarterback but lost by only scoring three points against the Patriots. Everyone felt like they were so close to breaking out but something needed to change. That’s when the team traded for Matthew Stafford last offseason and the rest is history.

They went 12-5 with Cooper Kupp having one of the best seasons of any wide receiver in NFL history as he won Offensive Player of the Year with almost 2000 yards receiving and 12 touchdowns. Not to mention a defense with Aaron Donald, Von Miller, and Jalen Ramsey. Who knows? This NFL week 1 game might be a Super Bowl preview.

These two teams faced off against each other in week one last season and they do it again this season. The Tampa Bay Buccaneers won 12 games in 2021 and were poised for another Super Bowl run until they met the eventual defending champs in the divisional round. Shortly after, Tom Brady announced his retirement. What many consider the greatest of all time finally hung up the cleats.

Not so fast. Not even two whole months later, Brady announces he’s coming back to football. He has unfinished business to attend to and he plans on seeking his eighth Super Bowl. With an explosive offense and hungry defense, Brady certainly is capable of doing that.

The Dallas Cowboys look to build upon their 13-4 record from 2021. Playing in the NFC East certainly helps but some people think this team can take the next step. The offense might have lost a step on paper but many think Dak Prescott is a strong MVP candidate and that Ezekial Elliott can have a resurgence this year.

Throw on top the sophomore year of one of the Defensive Player of the Year candidates, Micah Parsons, and what might be an even better defense, and this team could make some noise. How much noise? Who knows because when there are high expectations for the Cowboys, they find a way to let you down. This NFL week 1 matchup could set the tone for both teams and tell us a lot about them already for the 2022 season.

There are questions surrounding both teams headed into the season. Wide receiver Tyreek Hill requested a trade from the Kansas City Chiefs this offseason and it was granted as he was moved to the Miami Dolphins. Patrick Mahomes and this offense relied on Hill’s speed almost every time he was on the field. They will miss his sudden burst and his YAC yards but this offense still has the pieces to do damage.

The Chiefs still have one of the best connections in the game with Mahomes and Travis Kelce. When they need to rely on the run game, Clyde Edwards-Helaire is a reliable option. A deep threat was added in Marquez Valdes-Scantling and JuJu Smith Schuster was also signed. The offense will be fine, it’s the defense that still has questions. Even so, this team is still one of the favorites to win it all in a very tough AFC.

They will have a tough road game to start the season against the Arizona Cardinals. Entering week 8 last season, the Cardinals were undefeated at 7-0 until they took a close loss to the Packers. After that, the wheels started to fall off. They lost 6 of their last 10 games (including Green Bay) and got dominated by the Rams in the Wild Card game.

Arizona looks to rewrite the ship and show that they’re the team that started the season 7-0. Newly paid quarterback Kyler Murray leads this offense with newly acquired Marquise Brown along with A.J. Green and tight end Zach Ertz. The Cardinals will also have one of the best wide receivers in the game, DeAndre Hopkins, when he returns from his six-game suspension. This defense also still has a lot of pieces spread around to make some noise. This team has a lot to prove and will be tested against a very tough Kansas City team.

Other Games To Watch