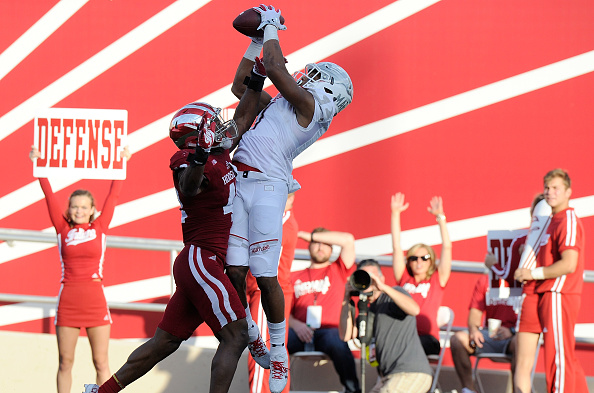 DJ Moore was the 24th overall draft pick back in April and, after being compared to the best receiver to come before him, finds himself with the task of filling Steve Smith Sr.’s shoes. As we gear up for training camp at the end of July, let’s take a look at some of the things the new rookie will bring to the Carolina Panthers.

What DJ Moore Does for the Carolina Panthers

– Ability to make plays after the catch

Moore proved that he has the ability to make plays after the catch.

Of course, having a defender on him makes that catch harder and we have to wait and see if he can do this on a game by game basis, but it’s something to look forward to. He’s making a splash with the media, so far, in OTAs.

One thing on his scouting report and one thing the Panthers were looking for in a receiver was size speed. He’ll potentially play across from Devin Funchess, also known for his quick feet. Adding Moore to the lineup will make it more difficult for defenses. His shorter stature is opposite of what they’re used to with Funchess and former receiver, Kelvin Benjamin but it is a step in the right direction.

Moore has a unique opportunity, coming into the league with new owner, David Tepper. Not only is Tepper a huge football fan, but a good businessman as well. Plus, there are bigger things to worry about like rookie deals. Not to mention, Moore can prove to his new boss how valuable he can be to the Panthers. That could build a solid relationship between the two. Having a new, good receiver who has good chemistry with his owner, is something the fans would like to see.

– Something old and new at the same time

His something old is his ability to remind Smith Sr. of himself. “I think he can run every route on the route tree. A Ph.D. in route-running,” said Smith. “He can line up in the slot and out wide. He’s elusive. He’ll run around you, he’ll run through you, he’ll run away from you.

“If you really want to know the truth about how I feel? They have never been able to replace me.

“Until today.” All quotes that Smith Sr. made about Moore to the Charlotte Observer.

But he has his own flare. His new is that he has flaws different from Smith Sr. which gives this team a different attitude to deal with. And, most of Smith’s team members are either gone or retired. So it’s a new experience on both sides.

There are so many uncertainties surrounding the rookie, Moore. Will he be able to live up to the Smith Sr.? Can he be the dynamic receiver the Panthers have been looking to add to their roster? There won’t be a definitive answer until the season starts but Panthers fans are hoping this pick was a good one.