Kyrie Irvinggot to play again when his Brooklyn Nets took on the Memphis Grizzlies, following an eight game suspension trip. However, the future of the Nets #11 guard isn’t all too clear.

The Kyrie Irving Suspension and Reinstatement

NBA star Kyrie Irvingwas back on the basketball court with his Brooklyn Nets last Sunday after being suspended for eight games. Bettors on betJack.com and around the world now wonder how that’s going to affect the odds of the upcoming games.

It was in early November that Irving linked to a film based on a book with anti-Semitic content. Irving was criticized but initially defended his right to share what he wanted. However, he removed the post after a few days. Eventually an apology was issued, but both the NBA and the Brooklyn Nets deemed it insufficient and Irving was suspended for at least five games.

Sports brand Nike also canceled its long-standing partnershipwith the star, announcing that it would not release the Kyrie 8 shoe variant as planned. Ahead of Sunday’s game, Irving said he should have handled the criticism differently, and apologized to anyone who felt threatened and hurt by the posts on Twitter that led up to his suspension, writes nba.com.

The relationship between the Brooklyn Nets and Irving was previously strained and the club did not extend his contract last summer. Last season, he missed most of the team’s home games because he refused to be vaccinated against covid-19 and was therefore not allowed to play in New York.

The spirits were high outside the Barclay’s Centre as well, where a large crowd gathered in support of Irving, protesting his former suspension. When asked if he knew about the gathering beforehand, Irving said he had no idea.

Irving’s statement that the Earth was flat completely shocked many of his fans. Let’s look at some other interesting information about the NBA player. For example, the famous player has starred in many Pepsi Max commercials and has often played the character of Uncle Drew. Not to mention, he also directed one of their commercials.

In addition to Pepsi, Irving has had endorsement deals with other brands, Death Candy and Nike being the biggest. Irving has an $11 million shoe deal with Nike alone, with Kyrie’s signature shoes being among the best-selling Nike shoes.

Irving requested a transfer from the Cavaliers because he wanted to shine as himself rather than play alongside LeBron James. Soin 2017 the Cavs traded him to the Boston Celtics, where he played for two NBA seasons.

Sure enough, he found his spotlight. Moreover, his abilities and skills were recognized and appreciated by fans, media and NBA officials. Soon after that, Irving helped the Celtics defeat the San Antonio Spurs for the first time since 2011. Similarly, he took the Boston team to the NBA playoffs in his next season.

During the season, NBA games are played every day, which means that you can practically always find something to bet on. The dynamic nature of basketball makes the sport particularly suitable for betting, as was demonstrated by the Irving case and how his reinstatement affected the outcome of the game as well as the Brooklyn Nets betting odds.

There is also a wide range of betting types to choose from. The most common is match betting, where you bet on which team will win the game. It is also common to bet on the winner of different parts of the game, such as a particular quarter or half.

If you’re sitting and watching the game, the NBA is also particularly suited to live betting. For example, in the Grizzlies–Nets November game, the Nets victory was driven by a long chain of surprises, such as Simmons having his first 20-point game since the 2021 playoffs.

As always, it’s important to find a betting company with a range that suits you, so do your homework to make sure you get an account with a site that offers the types of bets you prefer, but the most common types of bets are available from all companies. 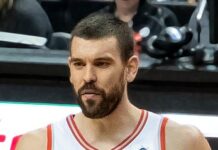 3 Athletes Who Had To Lose Weight To Make It Big