The much-anticipated sale of a Patrick Mahomes autographed rookie card did not disappoint. The sale was clocked in at an astonishing $4.3m, which is a record-breaking sum for a football card. Interestingly it wasn’t a price the Kansas City Chiefs star was willing to pay himself.

The card, much like the talented quarterback, is deemed a one-of-one, meaning there are no other cards of this type in existence. The cost eclipsed the previous record, unsurprisingly involving a Tom Brady card, by more than $1m. That card was sold in March for a similarly massive $3.1m.

Mahomes is clearly the golden boy of the NFL right now and all eyes are on the 25-year-old as the new season fast approaches. The form and displays by the former MVP will be crucial to the betting line on NFL games the Kansas City Chiefs face. The NFL title favorites take on the Cleveland Browns in their week one game and you can currently get moneyline odds of around (-250) on the Arrowhead Stadium side.

Patrick Mahomes was instrumental in aiding Kansas City’s run to the Super Bowl last time around before they lost out to Brady’s Tampa Bay Buccaneers and many predict the Chiefs will once again go deep into the postseason.

Kansas City has won the AFC West five years running and there seems little obstacle to Andy Reid’s side, at least until the regular season is over.

Reid had a strong enough roster to begin with but ably strengthened in the off-season to further boost their chances of a second Super Bowl triumph in three seasons.

They traded to bring in offensive tackle Orlando Brown Jr. from the Baltimore Ravens and Creed Humphrey and Trey Smith via the draft as well as picking up two-time title-winning guard Joe Thuney from the Patriots.

Indeed Mahomes is supremely confident of his team’s chances of going all the way, even going as far as to discuss the possibility of a perfect season, stating;

Mahomes expanded on the topic, adding; “It’s really hard to do — that’s why it’s only been done really one time. But at the same time, you’re trying to go in with that mentality that you’re going to win every single day so that when you get to those game days you have the best chance to win every single game.”

Such comments from pretty much any other NFL star might be considered arrogant, but from Mahomes they appear to be something of a statement of intent and a target that is by no means impossible.

Clearly it’s been some time since the only other perfect season has occurred, the only time being back in 1972 when the Miami Dolphins completed the feat, albeit in a 14-game regular season. 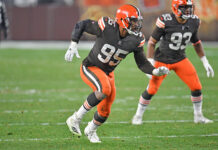