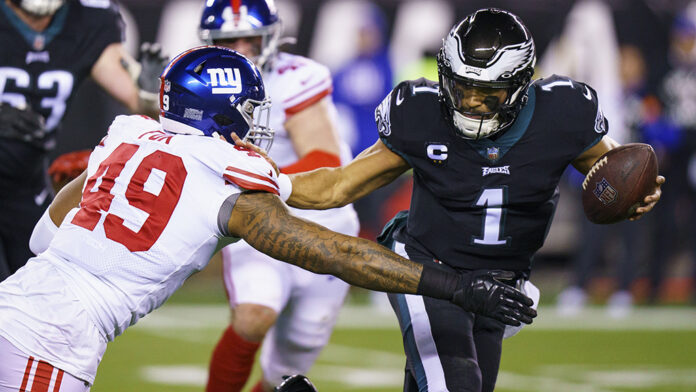 The New York Giants upset chances are slim for this upcoming Saturday night divisional showdown, and everything will need to go right in order for them to prevail.

The Philadelphia Eagles roster is superior to Big Blue’s in every single way. Their squad has only lost one game this season when superstar quarterback Jalen Hurts is active, and it only strengthens their case that the game is being played at Lincoln Financial Field.

Although a sensible football watcher is aware that the Eagles have the edge in practically every category, this does not mean a Giants upset should be immediately written off. The Brian Daboll-led team, which went 9-7-1 in the regular season, is coming off an electric road win in Minnesota to stun the Vikings on their own turf. Daniel Jones had a fantastic game in his playoff debut, completing 24 of his 35 pass attempts for 301 yards. He paired that with two touchdowns and 78 rushing yards.

New York played a perfect game in the Wild Card Round that led to their improbable victory, but they will need to play better to beat the Eagles. Here are the three most important factors that could contribute to a Giants victory.

Keys To a New York Giants Upset over the Philadelphia Eagles

One of the biggest praises for Daniel Jones this season is how well he has protected the ball. For someone who fumbled 18 times in 13 games as a rookie in 2019, he has come an extremely long way in this department. The former Duke Blue Devil only lost three fumbles this year, tied for his career low. Additionally, he only threw five interceptions, which was paired with an NFL-leading 1.1% INT%.

The concern for the turnover battle is not whether “Danny Dimes” will make a mistake, but whether the Giants defense will be able to force any versus Jalen Hurts. New York is the only team remaining in the playoff bracket that failed to produce 20 or more takeaways in the regular season. Their six defensive interceptions ranked dead last in the league, tying only the Las Vegas Raiders.

Even if the Giants defense came up with some key stops against the Vikings, it is unrealistic to rely on big third-down stops and force the Eagles to punt all game. An offense with as much firepower as Philadelphia’s needs to be game-planned much differently than you would versus an offense led by a player like Kirk Cousins.

Whether it be a strip sack by Kayvon Thibodeaux, an interception from Xavier McKinney, or a muffed punt on Philadelphia’s end, the Giants will need a big play in order to stay afloat in this game.

Can the surging Giants upset the injury-riddled Eagles? @greggrosenthal provides his game picks for the Divisional Roundhttps://t.co/ftp6uCz170 pic.twitter.com/d8juq9yxbZ

2. Take advantage of Jalen Hurts not being 100%

He isn’t listed on the Eagles injury report, but even Head Coach Nick Sirianni acknowledged that he won’t be playing at his best this Saturday. After missing Week 16 and 17 due to a shoulder sprain, the Eagles signal caller looked iffy in his return versus the Giants in the final regular season matchup. Normally a threat with his legs, he ran for just 13 yards on nine carries, throwing an interception and no touchdowns against the second-string Giants defense.

It was not too important of a game for both teams, but Hurts certainly did not play up to his usual standards. A shoulder injury could potentially impair Hurts’ usual style of play, as he might even be less likely to run and more likely to avoid contact with the defense.

If Hurts can not get the running game going for the Eagles, it will make the Giants job a lot easier. Although the Eagles offensive line is among the best in the NFL, containing Miles Sanders is not as tall a task as containing the quarterback as well. The same can not be said for Boston Scott, who has tormented Giants fans for several years now.

Nonetheless, the Eagles still have a humongous advantage with Jalen Hurts compared to Daniel Jones. Still, there is no telling how he will play this weekend, and a few mistakes from the MVP candidate could make all the difference for Wink Martindale’s unit.

This might be the biggest key going into Saturday. Philly’s defense allowed just 20.2 points per game this year, good for eighth in the league. However, one aspect of their defense has been exploitable, and it is how they defend the run.

Philadelphia allowed 4.6 yards per carry and 121.6 yards per game to offenses in 2022, both ranking in the bottom half of the league. This is great news for the Giants, who happen to have one of the best running backs in the NFL Saquon Barkley. Playing against the Vikings, Barkley looked as quick and explosive as ever, averaging 5.9 yards per carry and a touchdown run on the opening drive. He seems to be back where he was at the beginning of the season after a late-year slump.

When the mediocre Giants receivers are opposite cornerbacks Darius “Big Play” Slay and former Giant James Bradberry IV, they will have a hard time creating separation as they did with the Minnesota defensive backs. If Darius Slayton and Isaiah Hodgins are blanketed early, the “Quadfather” will have to break off some of his big runs to give offensive coordinator Mike Kafka and crew some hope.

It might be the final game in a while for the New York Giants, but they will not go without a fight. Win or lose, their season has been a major success, and the Daniel Jones-Saquon Barkley duo have done everything they can to get offered a long-term extension.