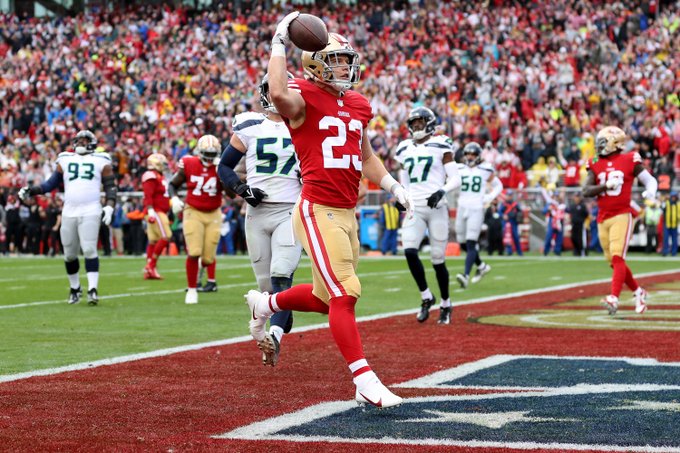 As we finalize the NFL wildcard round of the playoffs, we are seeing a clearer picture of who will represent their conference in the Super Bowl. We are fast approaching the final four in each conference. And, while it’s easy to look forward to the dynamic quarterback matchups of the AFC, or the dominance of the eastern division of the NFC, we must first understand what we have seen to this point through one round (minus one game). Here it is! Your five things we have learned in round one of the NFL Playoffs.

1. San Francisco is That Good

I know what you’re going to say, “well, they played an inferior team.” Maybe so, but the Seattle Seahawks this year we’re the epitome of a look-ahead team that made most teams they played “earn” a victory.

SEVEN straight games with a touchdown for Christian McCaffrey 🔥 pic.twitter.com/4rIF7P4fft

What was impressive about this game was the sheer offensive explosion the San Francisco 49ers showed they were capable of. Rookie quarterback Brock Purdy missed 12 passes total en route to 332 yards and three touchdown passes. In his return to the field, stud receiver Deebo Samuel had six catches for 133 yards and a touchdown. Meanwhile, running back Christian McCaffrey had 119 yards on 15 carries while also scoring a touchdown.

All that offense aside, this team allowed less than 250 yards passing and forced two turnovers. There may be no better team currently in the NFC than the 49ers and they showed us in a big way that they can win with more than just a good defense.

Oh man, this likely was your favorite game of the weekend unless you were a Bengals fan. How do we even recap something so crazy? Let’s just start from the beginning of the journey.

Quarterback Trevor Lawrence has been tasked to steer the Jacksonville Jaguars from the depths of the cellar and in year one is inconsistent with a bad coach and chaotic in-house turmoil. Hiring coach Doug Pederson seems like the exact move this team needed to make to progress, but going from winning the division to a 27-point deficit in game one of the playoffs is a whole different ball game.

Let’s set aside the fact that he clearly had some playoff jitters and threw four interceptions (yes, that is a bad thing). There is a certain measure for quarterbacks that can’t be quantified in statistics and that is the ability to overcome adversity as the leader of your team. Overcoming a four-touchdown deficit in your first playoff game is nothing to scoff at.

Pair that with his end-of-season run to get to the playoffs and we have yet another AFC quarterback ascending into the pantheon of greatness. Lawrence has been the number one quarterback in high school, then college, and now sees himself with another opportunity to achieve that spot in the NFL. But now, he is tasked with going against current QB1 Patrick Mahomes in this upcoming week. The future is bright in Duval County!

When you play a division opponent twice in the regular season, both of those games take a little extra juice to win. Now factor in a rubber match in the first round of the playoffs!
The Buffalo Bills truly should have won this game handily, considering the Miami Dolphins played with third-stringer Skylar Thompson at quarterback. The Bills defense just doesn’t scare anyone and they almost paid for that this week. You’re going to get high-powered offense from this team, but a credible defense will limit the big play and minimize the effectiveness of your offense.

The issue is, if someone can do this to Buffalo, their defense has given us no reason to believe they can match it. The emotional highs and lows of the last month in Buffalo have to be taking a toll on the team as well. They now get to play Cincinnati again, this time at home, and there is a realistic possibility Damar Hamlin can attend this game, giving Buffalo a boost that they so desperately need. Even with all this, I believe they’re the third-best team alive in the AFC currently and will have trouble shutting down an offense like Cincinnati or Kansas City.

4. Brian Daboll and Daniel Jones are Here to Stay

At the beginning of the year, the New York Giants had a new head coach and a quarterback that many believed would be on his way out by Thanksgiving. To the Giants credit, they gave their quarterback and new head coach a full year to showcase what can and can’t be done in their offense and it paid huge dividends in the duo’s first playoff game.

Daniel Jones looked like a bonafide MVP with the lights shining brightest, going 24/35 for 301 yards and two passing touchdowns. He also had 78 yards rushing en route to an upset win vs Minnesota. He did face the likes of primetime Kirk Cousins, who had his fair share of puzzling plays (like a four-yard pass on 4th &8 to end the game), but that wasn’t the reason why the Giants won.

The Giants came out on top due to the offensive firepower rookie coach Daboll had in store, and it was perfectly executed by his quarterback Daniel Jones. This was a coming-out party for the Giants and should have the fans in New York feeling like they’re here to stay for several more successful years.

This is purely speculation, but let’s face the facts.

To start, an injury that was deemed a week or two turned into a season-ender with little-to-no reporting until Lamar Jackson, himself,  tweeted the day before this game about the diagnosis. There is no doubt in my mind that this injury occurred and is real, but what is also real is the fact that when the team played its most important game, he failed to show up.

remains unstable. I’m still in good spirits, as I continue with treatments on the road to recovery. I wish I could be out there with my guys more than anything but I can’t give a 100% of myself to my guys and fans I’m still hopeful we still have a chance. 💜💜

He has also not signed a long-term deal with this team and may be playing some hardball behind the scenes.

He didn’t just physically not show up, I might add. Take away the fact that they played with a backup quarterback, Jackson failed to travel with the team to the game! There has to be value in his knowledge of the game and division rival Cincinnati. Factor this in with the old-school mentality taught and coached by John Harbaugh and we have a recipe for divorce.

Jackson could (and should) be the hottest free agent we have seen in quite some time and whichever team signs him to that deal is an immediate contender. He is too talented to just go away into the night. Quoth The Raven, Jackson is “nevermore

One more playoff game to go! What will we learn tonight? Is it typical Dallas playoff disappointment partnering with Brady magic? Or will Dallas finally get back to what those teams of days past achieved? I’ll be watching, will you?

Follow me on Twitter @steakspeare and follow @lwosports for all your sports takes debates. If you’re a sports fan, we have something for you.
5 1 vote
Do you agree with this article? Let's see your vote!