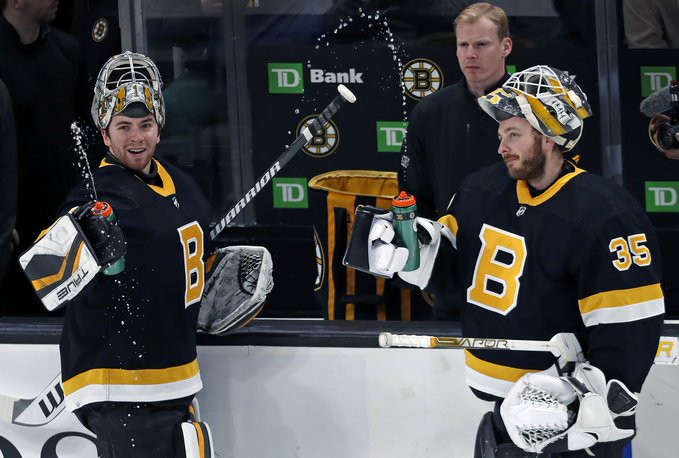 This is our last week looking at the goalie situations in each division of the NHL thus far this season. We have already looked at the Central, Pacific, and Metro Divisions, so this week, we will be looking at the best and worst goalie tandems in the Atlantic Division. The Atlantic is full of excellent goalies, and it is the only division where no tandem has a combined save percentage under .900. This means that even though there are some teams whose goaltending is definitely better than others, no team in this division is in a horrible goaltending situation.

Was chatting with Linus Ullmark when Jeremy Swayman walked by.

Swayman: “He’s the best there is and ever will be.”

Ullmark: “Why are you talking about yourself in the third person?”

Reasons why Ullmark has been so good for the Bruins, vibes included:https://t.co/vljxN3QbTW pic.twitter.com/8okYKvwxaw

One of the reasons that the Boston Bruins have been off to such a hot start this year has been their goaltending, specifically that of Linus Ullmark. Ullmark was above average in his first season with Boston last season, going 26-10-2 with a .917 save percentage. This season, however, Ullmark has been nothing short of sensational. He is currently leading the NHL in wins (14), save percentage (.936), and goals against average (1.93). He has only had four starts this season where he let in more than 2 goals, and none of those 4 starts ended up being losses.

This is mostly because the Bruins are so tight defensively and do not give up a lot of high-danger shots. Boston is currently not just first in their division but also first overall in the NHL, and with goaltending like this, they are likely to stay near the top through the rest of the season.

As mentioned above, despite the fact that I am listing Detroit as having the “worst” goaltending in the division, that doesn’t mean that it is sinking the Red Wings. In fact, the team currently finds itself in the last wild card spot in the East, and it is not inconceivable that Detroit ends up making the playoffs. If they do, however, it will be on the back of Ville Husso and not because they have a solid tandem. Husso has been very solid for a young Detroit team, posting a respectable record and a .912 save percentage and 2.58 goals against average. He is also tied with Connor Hellebuyck for the league lead in shutouts.

Alex Nedeljkovic, however, has been abysmal. He is bottom five in the league for save percentage (.880), goals against average (3.97), and goals saved above expected (-9.5). He has let in four or more goals in five of his seven starts. Because of these poor stats, the combined numbers of the tandem end up being very low. Combined, they have a 3.01 goals against average, a .901 save percentage, and a GSAx/60 of -0.313. Detroit is a young team on the rise, but if they want to be a legitimate playoff contender, they are going to have to find a way to get solid goaltending from both of their goalies.

5 2 votes
Do you agree with this article? Let's see your vote!

5 2 votes
Do you agree with this article? Let's see your vote!
Subscribe
Login