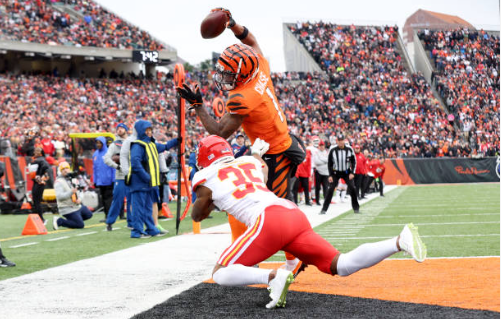 The intensity felt the week after Thanksgiving isn’t just the rush of getting your holiday shopping done but also the playoff push felt by many teams across the National Football League. As the NFL enters Week 13, there are plenty of big games that take on a heightened importance for playoff positioning.

Every game on the NFL schedule is important. Each team can pull off an upset by catching someone on a bad week or having a big performance by one of their stars. However, there are three games that stand out as ones that will be key to watch this weekend. They either impact the playoff seeding, a wild card chase, or could possibly be a playoff preview.

The Three Games to Watch in the NFL in Week 13

This game features two NFC East rivals heading in different directions. The New York Giants started the season with a 6-1 record but have since lost three of their last four games to bring their record to 7-4. This record is good enough for the sixth seed in the NFC, but a loss to the Commanders would drop them to seventh in the conference and on the fringe of the playoffs.

Washington, on the other hand, had started the year 1-4 but has since won six of their last seven games to pull within a half-game of the Giants for third place in the NFC East. Much of that success has coincided with starts from Taylor Heinicke, who is 5-1 since replacing an injured Carson Wentz earlier in the year.

While Heinicke’s numbers haven’t been spectacular, the defense for the Commanders has stepped up during their 6-1 run, allowing only 15.4 points per game during that span. In the first five games of the year, the team allowed 25.6 points per game.

Looking ahead to the Giants schedule this game is more impact on New York than Washington. After playing the Commanders in the Meadowlands, the Giants host the Eagles and then travel to Washington and Minnesota. To lose this game and have to climb out of the bottom of their division in December and January would be a difficult task.

These two teams have yet to play each other this year but will quickly turn around and play again during Week 15 in Washington.

When the Miami Dolphins travel to San Francisco to play the 49ers it will be a matchup of two of the hottest teams in their respective conferences. An interconference game this late in the year between two division leaders provides a good barometer of the strength of each conference.

Miami will be taking a five-game winning streak with them into San Francisco. The most notable win in those five games for the Dolphins came against the Detroit Lions in Week 8. At the time the Lions fell to 1-6 with the 31-27 loss but had won three straight following that defeat until losing to the Buffalo Bills on Thanksgiving.

The Dolphins’ schedule gets significantly tougher starting with this game against the 49ers. Following this game, they travel to Los Angeles to play the Chargers and then Buffalo before coming back home to play the Packers. The Dolphins could go 0-3 during this stretch of games which would kill their AFC East chances, but they would still likely be in playoff contention.

San Francisco has an easier stretch the rest of the way. After playing Miami this season their toughest test will be in Seattle in Week 15. The 49ers currently have a one-game lead over Seattle in the NFC West and hold the tiebreaker with a win in Week 2.

The orange jerseys return this week for the #Bengals.

And yes, I have a spreadsheet for that.

They are 27-8 in orange jerseys, and 9-1 in the orange jersey, black pants combo they’ll be sporting Sunday against the Chiefs. pic.twitter.com/YivMSFDnX4

This is one of the best games in Week 13 not just because it is a matchup of two AFC playoff teams, but it is also a rematch of last year’s AFC Championship. A game in which the Cincinnati Bengals went into the Chiefs Arrowhead Stadium and upset the defending AFC Champions. The rematch will take place in Cincinnati with Kansas City riding a five-game winning streak and the Bengals winning seven of their last nine games.

Outside of revenge for the Chiefs, this game is about holding on to the top spot in the AFC. Kansas City is currently 9-2 and sits a game ahead of Buffalo and Miami for the number-one seed in the playoffs. Buffalo owns the tiebreaker over Kansas City after beating them in Week 6 of the NFL season. The game against Cincinnati is likely the Chiefs biggest game remaining on the schedule and a win puts them in the driver’s seat for a first-round bye in the postseason.

The Bengals are tied with the Ravens atop the AFC North with a 7-4 record. Cincinnati has a chance to avenge their Week 5 loss to Baltimore in the last game of the season that could decide the division. With a road trip to New England and a home game against the Bills still on the schedule, this game against Kansas City would be a huge win at home to keep them firmly in the division race.