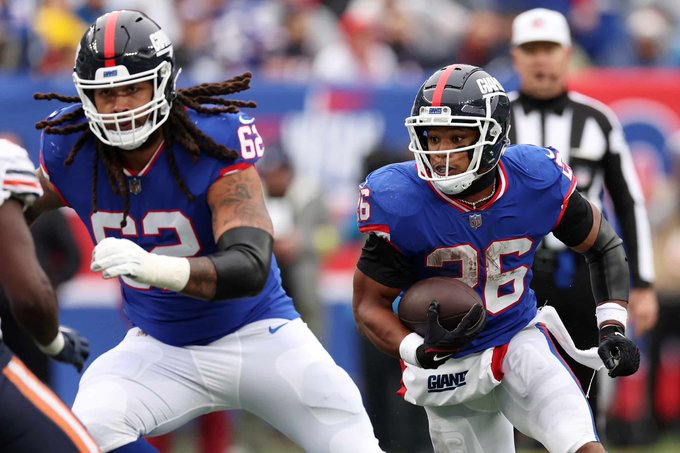 This week, we start off with a knock-knock joke. Knock knock? (Who’s there?) Foreign. (Foreign who?) 4-1 baby!! After an abysmal performance the previous week, Steakspeare’s Spreads rebounded in a big way to go three games over .500 and we now sit at 24-21.

We are finding out more and more this year, that with the NFL scores being lower than average, the points in these spreads are as valuable as ever. It’s time we take that philosophy and make some money on it. Two underdogs this week, two spreads of five or more points, and one excited writer to break it all down! Let’s see what we got…

Saquon Barkley makes his way back to the top of TGH’s Running Back rankings following the Giants’ bye week last week.#NFL | #FantasyFootballhttps://t.co/cYv7VAwhX1 pic.twitter.com/GreSgnn4W5

Last we saw the Texans, they covered a double-digit spread at home on Thursday Night Football against the soaring Eagles. As we broke down in the opener, points are of higher value this year than in years past.

My issue with the Texans? They’re just not that good at football this year. They have all the makings of a “feisty” or “gritty” team, but cliches aside, they’re a team that gives up. The Giants meanwhile are fresh off a bye week at home and have legitimate playoff plans on their horizon. Look for the G-men to take care of Houston and comfortably cover this spread. The Texans just don’t have it this year.

Not much love has been shown to the Bears in these writeups, but it’s high time we start to put some respect on their name, especially the name Justin Fields.

Over his last three games, Fields has completed 61% of his throws and has accounted for nine total touchdowns. Let’s not gloss over the fact that over the course of these games, he’s also 320 yards rushing. Sometimes the game of football can become a sport about stopping the other team’s best player. Fields is that guy for the Bears and the Lions defense hasn’t been consistent enough for us to believe they have what it takes.

The Bears win big at home and Fields keeps rolling.

This could be a potential Super Bowl preview if each team had any say on it. What could sour this potential blockbuster matchup is the uncertainty behind the Josh Allen arm injury. Could we see a Case Keenum revenge game with his wide receiver Stefon Diggs? Both former Vikings contributed to an unreal playoff run that culminated in the “Minneapolis Miracle”.

I know what you’re thinking. This is a lot of love for a team without their star quarterback. I agree, which is why the Vikings have to be the side here. Even if Allen plays, he won’t be 100% and Minnesota is rolling on all cylinders lately. That’s your difference and could ultimately tilt the game in the Vikings’ favor outright.

There is no credible offensive threat this year. It’s understandable that rookies and guys just now carving a role in the league would start slow, but this has been an embarrassing season for the Packers. The Packers did just pick up former first-rounder Johnathan Abrams from waivers, but he won’t be enough to stop a Cowboys team that is having themselves a surprisingly fun year.

Pair this with the loss of stud pass rusher Rashan Gary and this could get ugly quickly. This is my game of the week! Bet it and make money.

The theme for this one is that seven points are just too many when you have a quarterback talent like Justin Herbert opposite you. Now, the Chargers by no means have had a season that’s been considered “great”, but they will keep this game close enough for this to be the betting side.

I believe that this will be a low-scoring game dominated by both the stud running backs. Ekeler is a fantasy football manager’s dream contributing to both the passing attack and the running game. Christian McCaffrey is also fitting in just nicely to a scheme that makes even nominal running backs look like Barry Sanders. Lots of runs and not a lot of points means this should be a cover you can feel good about.

Another week down. We are getting increasingly closer to the Thanksgiving weekend when we really begin to see the chips fall. Who are the real teams we need to fear and who are the ones we need to forget about? I can assure you, we will be watching, will you? Follow me on Twitter @Steakspeare and follow @LWOSports for all your sports takes and debates.