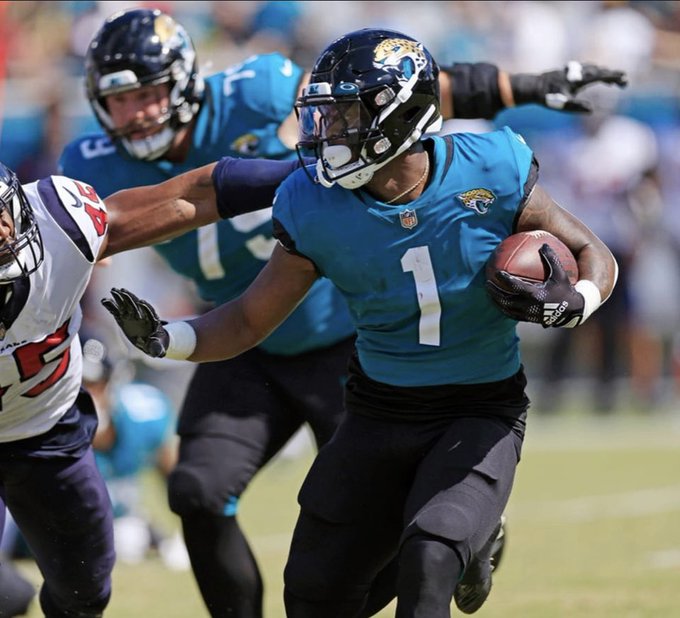 19-16. This is a marathon, not a sprint, but after a 4-1 week, you have to be feeling yourself, right? Our lone loss came at the expense of a Green Bay Packers upset that in hindsight should have been the bet. Alas, we cannot change the past. We can only control what we do in the present and that means FIVE MORE GAMES!

There’s an opportunity here to really break above the .500 mark that we’ve been hovering around for a few weeks now. So, without any more rambling, here are the weekly winners that you’ve been looking forward to. Get those units ready!

Travis Etienne over the last 3 games:

This game has a variety of factors for why the Jaguars are the side to bet on here. To start, there is a serious advantage at the quarterback position with Trevor Lawrence taking on Brett Rypien.

Denver feels like a fish out of water this year, and of course, they look worse without veteran signal-caller Russell Wilson. They failed to score 10 points last week and are facing an offense that has now pushed their chips in the middle on running back Travis Etienne, so we may see some different wrinkles on this offense. Finally, the Jaguars are at home and the line is favored by less than a field goal.

This is a game where the Raiders would be favored if they were at home. Another instance of quarterback discrepancy is the main reason why the Raiders are the side to be on.

Primetime Andy Dalton is one thing, but some of the decisions he made last week were puzzling at best. Now, since Dalton has been tabbed as the starter over a healthy Jameis Winston, the Raiders pass rush now has an opportunity to effectively pressure the ineffective quarterback.

Even if you aren’t a Derek Carr fan, the Raiders weapons are far and away above what we have seen from the Saints this year. Look for Vegas to firmly control and win this game by a significant margin.

Some games are better than others. Miami is flat-out better than the Lions here and it’s not even close. The offensive firepower alone should be enough to overwhelm the Lions, but if not, the defense Miami has vs a Lions offense that seemingly is non-existent without D’Andre Swift should suffice.

Not to be harsh, but the Lions seemingly were a better story in the pre-season and the Dan Campbell chapter of this franchise book may be ending soon. Meanwhile, Mike McDaniels looks even better than advertised and is finding ways to win games with a healthy Tua Tagovailoa. This game shouldn’t be close, which is why Miami is the bet here. Hard knocks seem to have fallen on hard times…

This was a surprise to see the Jets as home underdogs against a Patriots team that got embarrassed on Monday Night by a Bears team I don’t think anyone would consider a contender. Be that as it may, here we are.

The Jets are a feisty 5-2 and are seemingly firing on all cylinders to begin this year. The Patriots, meanwhile, are currently a carousel at quarterback (a theme this article has been following for a few weeks now). If it was coach vs coach, I’d see why the Pats would be favored, but that just isn’t the case. The Jets are better at quarterback, weapons and have all the momentum in this game, and are at home.

Don’t look at the jersey name here, look at the trend. These aren’t the same Jets and they should win outright.

Indianapolis is free falling currently. You go from a rent-a-quarterback scheme three years running, to an unproven backup with a team that is seriously lacking in weapons. Shaquille Leonard, arguably the team’s best player outside of Jonathon Taylor, hasn’t been healthy all year.

This isn’t an ideal spot for the Colts to be in and that’s why Commanders need to have the bet. This game could be over early, but the one advantage the Colts have is that no one has really seen Sam Ehlinger in an NFL situation just yet. Ron Rivera, a defensive head coach, should be prepared to take on this task and the Commanders should be fine on the road against a Colts team that’s just not having a great year.

This is a week that we looked at the quarterback matchups to make decisions on the line. The NFL is a quarterback talent league. The good ones usually have the most wins and the bad ones usually stand out. This week, there are a lot of unknowns versus knowns, and smart money sides with what they know! Do you think we got it right? Let me know on Twitter @steakspeare and be sure to follow me and @LWOSports for all sports takes and needs!