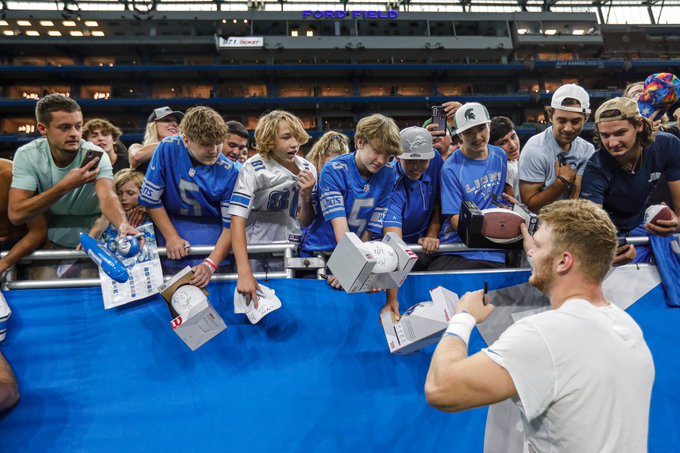 Can you feel it? The heat of summer is starting to subside, school is back in session in most places, and training camp is in full swing. It’s football season folks and I couldn’t be happier. One of diehard football fans’ newer traditions is the behind-the-scenes show on HBO, “Hard Knocks”.

I know what you’re thinking, why should I watch the Lions anymore than I have to? “Hard Knocks” has a way of creating a likable underdog and what better story than a team who has rarely achieved regular season success much less postseason success? With each show we watch, we have our favorite characters/performers. Football is no different, but the drama and personalities are REAL. Here are the four most likable personalities of HBO’s “Hard Knocks”.

Just like playing games on the field, the success starts with the coach and boy is Dan Campbell something. His introductory press conference for the Lions set the tone for what Campbell will bring to the team and the NFL: a ferocious intensity and a litany of quotable lines at the press conference.

Whether it is describing his team biting the kneecaps of his opponents, or doing burpees with the team at camp, one thing is certain about Campbell, he is 100% in on the dream that this team will change its losing culture. He has surrounded himself with numerous former players including quarterback, Mark Brunell, and running back, Duce Staley as position coaches among many others.

He is an emotional leader with an old-school mentality, but it is organic and doesn’t feel like a bit. Some coaches go overboard with this mentality (I’m looking at you Urban Meyer), but Campbell knows when to be intense and he knows when to nurture the growth of the team. This makes him extremely likable and brings credence to his saying of people being “foxhole guys”. He leads by example.

Underdog is not a word you would use to describe Aidan Hutchinson. The man was an absolute menace in college and made everyone in the Big Ten (especially OSU fans) pay attention to what he was doing.

He was then selected second-overall by the Lions. What you may not have known was he went to high school at Divine Child in Dearborn, Michigan, and then went on to play for the Michigan Wolverines. The man is literally a hometown hero and everyone loves a coming-of-age story.

In his first preseason game (at Ford Field in Michigan) the first two plays he registered a tackle and then a sack. “Hard Knocks” shows his family in the suite overcome with emotion and sheer awe watching as their little boy who played flag football for the “Lions” growing up now actually plays for this team. Not much more can warm your heart than watching a kid and his family live a true dream. Even Buckeye fans have to acknowledge that some things transcend sports. Hats off to Hutchinson, what a story.

Underdog IS a word you would use to describe Malcolm Rodriguez. Rodrigo, as he is affectionately called by his teammates and coaches, is having as good of a camp as anyone can have.

A sixth-round pick that was expected to be a depth fill/fringe roster guy started for the first team defense in preseason Week 1 and has had multiple segments on “Hard Knocks” of all coaches giving him more than just a pat on the back. Linebacker coach Kelvin Sheppard repeatedly addressed the linebacker room pointing out that Rodrigo is ascending the depth chart and is taking playing time away from veterans.

It would be easy to get a big head as a young player in the league hearing this, but Rodrigo is extremely humble in receiving this praise and is as likable on camera as any of the featured players and coaches. Preseason in the NFL means different things to different people, but for all rookies drafted high and low it means one thing: an opportunity to prove that you belong. Malcolm Rodriguez has proved he belongs and then some. Take notes NFL defense fans, he’s here to stay.

It’s not often that we talk about the backup running back being the emotional leader of a team, but Jamaal Williams’s EQ is just different. He is the backup to star running back D’Andre Swift but he is the ultimate teammate.

In a now-viral video, he breaks down the huddle with an extremely emotional rallying cry about what it takes to go to the next level for him. He describes that the losing record of the past year is what drives him to be better all the while battling tears and voice cracks. The message is simple. If you don’t care, don’t be on the team. The speech encapsulates everything that “Hard Knocks” shows us the Lions want to be: mentally, physically, and emotionally tougher than all other opponents.

It would be easy to get discouraged as a backup player, but a teammate like Williams that holds all players and himself accountable for reaching the same goal is the type of person we all want to work with. The dramatic flare with it just makes for great television.

Whether you’re a diehard Lions fan since the dominant running of Barry Sanders, or a casual NFL observer who only knows the lows of the franchise, “Hard Knocks” makes this team a group of individuals we truly want to succeed. I’ll definitely be tuning in to their games and will be paying much closer attention than I would have without this program. Will you?

5 2 votes
Do you agree with this article? Let's see your vote!

5 2 votes
Do you agree with this article? Let's see your vote!
Subscribe
Login