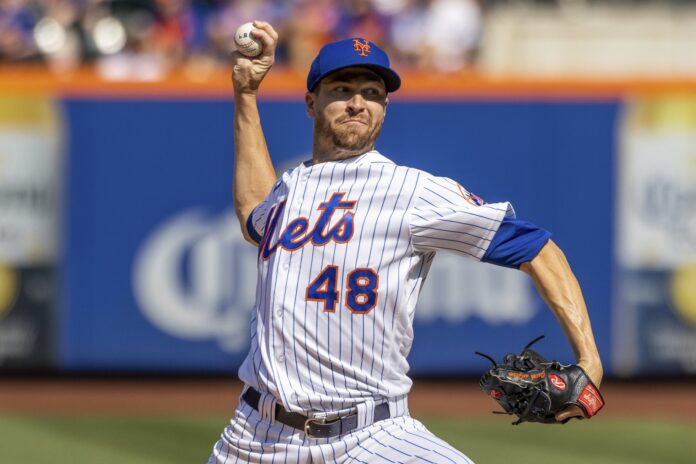 Now that the playoffs are underway and the New York Mets have been eliminated, it’s time to look at the potential landing spots for Jacob deGrom. It is all but guaranteed that he will opt out of his remaining contract and test free agency for the first time in his career. Today, we narrow it down to the three most likely potential landing spots for Jacob deGrom in his search for the elusive World Series championship.

Jacob deGrom is one of this generation’s elite starting pitchers. With a career ERA of 2.52 and 1,607 strikeouts across 1,326 innings, he would be the best available starting pitcher in free agency in whatever year he was a free agent. He has dealt with injuries of late, only making 26 starts since the start of the 2021 season, but he has shown durability and consistency in the past so it is possible for him to stay healthy for entire seasons.

In order for a team to be considered for this list, they need to have the financial flexibility to afford deGrom, and they also need to already be playoff contenders because a team below .500 would not be willing to spend as much as necessary to bring in deGrom just to miss the playoffs again. Where do you think deGrom will land? Let us know in the comments below!

This may be considered too safe of a prediction, but that does not make it any less likely. It is still entirely possible that deGrom decides not to opt-out after all, and remain with the New York Mets where he is owed $32.5 million next year and in 2024, a year that can be picked up via a team option. He has spent his entire career with the Mets and is most familiar with their organization and their fan base, so it could potentially happen.

It is more likely that deGrom opts out of his current contract and works for a new deal with the Mets worth more money. After they signed Max Scherzer to a 3-year, $130 million contract last off-season, a pitcher who is three years older than deGrom, it is possible that they offer deGrom a contract worth even more than that, closer to the 3-year, $150 million range. Whether he does return to the Mets or not, they will definitely push hard for him to stay, and that is what makes the them one of the potential landing spots for Jacob deGrom.

First of all, who would not want to join a roster that has been to the World Series in three of the last five years? The Houston Astros are still in the midst of yet another playoff run and are looking to make that four in six years, as they are still one of the best teams in baseball. The biggest thing pointing to them as one of the potential landing spots for Jacob deGrom? They have $38,098,593 coming off the books at the season’s end.

With the majority of the names coming off the books for the Astros being role players, they still look to have their core intact. Yordan Alvarez is signed through the 2025 season, Kyle Tucker is under team control through the 2025 season, Justin Verlander is almost guaranteed at the age of 40 to take his player option for next season, and Jose Altuve is signed through the 2024 season. Adding deGrom to that roster would all but guarantee them a spot in next year’s World Series.

One of the safest and most likely potential landing spots for Jacob deGrom is the Atlanta Braves. The reigning, defending, undisputed World Series champions of 2021 are in the midst of another playoff run in a season in which they fared better than their World Series season, 13 wins better to be exact.

With a 2023 rotation set to consist of Max Fried, Spencer Strider, Kyle Wright, and Charlie Morton, adding Jacob deGrom would go a long way toward making that rotation the best in baseball next year, if not the best in the history of baseball. Add that to one of the best lineups in baseball, and you have got yourself another World Series appearance on your hands (assuming everyone stays healthy of course). That stacked roster, plus the payroll flexibility the Braves perennially have is what makes them one of the potential landing spots for Jacob deGrom.

4 3 votes
Do you agree with this article? Let's see your vote!

4 3 votes
Do you agree with this article? Let's see your vote!
Subscribe
Login