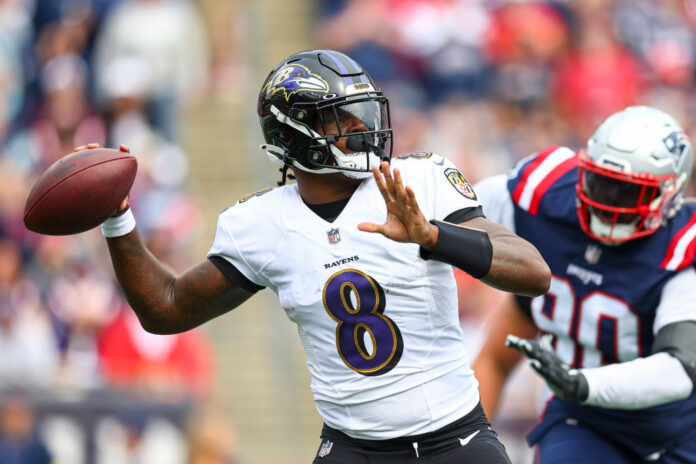 NFL Week 5 is already upon us and there’s been a lot of ups and downs throughout the league so far this season. We’re getting more and more of a clue as to what these teams’ outlook is for the rest of the campaign. Heading into this slate of games, there’s only one undefeated team and one team that has yet to win a game. On paper, it might not be the strongest slate but as seen throughout the year so far, that doesn’t matter one bit.

Sunday Night Football features a pair of 2-2 teams fighting for the top spot in the AFC North. The Baltimore Ravens are coming off a heartbreaking 23-20 loss to the Buffalo Bills after they were up 20-3 in the 3rd quarter. Lamar Jackson had a poor day through the air as he only threw for 144 yards and a touchdown and two interceptions. He did rush for 73 yards but it wasn’t good enough. The only highlight of this offense was J.K. Dobbins, who had touchdowns on both the ground and through the air.

The Cincinnati Bengals on the other hand came out of week 4 with a victory, handing the Miami Dolphins their first loss of the season. Everyone is waiting for this team to finally break out into what we saw last season and maybe this is the start. Joe Burrow completed 20 of 31 passes for 287 yards and two touchdowns. Joe Mixon rushed for 61 yards and a touchdown while the great wide receiver duo of Tee Higgins and Ja’Marr Chase went off for 124 yards and 81 yards respectively, with Higgins adding a touchdown to his 100-yard game.

This NFL Week 5 game could turn into an offensive battle when it’s all said and done. The Bengals’ offense is seventh in passing yards and has all the weapons but the Ravens’ offense ranks third in the league in points scored and top ten in rushing yards. However, Cincinnati has the edge on defense as they rank eighth in points allowed and fourth in rush defense. This game might come down to defense but on paper, the offenses should shine on Sunday Night.

The Philadelphia Eagles come into this game as the last undefeated team in the league at 4-0. Jalen Hurts has been a pleasant surprise this season as he’s rushed for a touchdown in three of the four games and thrown for over 300 yards in two of the four games. It helps when you have a good receiving core led by A.J. Brown and DeVonta Smith. The run game has carried over from last season, as they ranked fifth in the league in rushing yards. Last week was a good example of why as Miles Sanders rushed for 134 yards and two touchdowns. Wrap all this up and the Eagles are fourth in points scored and second in total yards.

They will have to go on the road and face an inconsistent Arizona Cardinals team as their record of 2-2 reflects that. They picked up a victory last week with Kyler Murray recording three total touchdowns and Marquise Brown having 88 yards and a touchdown. Even with the win, it still didn’t feel like they are progressing. The Cardinals rank middle of the pack in many offensive categories. The same goes for the defense and some categories even rank towards the bottom. One thing to hang their hat on is their rushing defense, which ranks fifth in the league.

This is the perfect opportunity for the Cardinals to take steps to prove that they can be a viable contender but it will be tough as not only are the Eagles tops on offense but are a top ten defense in points allowed, total yards, passing defense, and rushing defense.

Despite Dak Prescott being injured, the Dallas Cowboys are 3-1 with Cooper Rush starting under center, including winning three in a row heading into NFL Week 5. He doesn’t have insane numbers over these three games but he’s done enough to win. Wide receiver CeeDee Lamb has improved every game and is only getting better as he had his best game of the season last week with 97 yards and a touchdown. The Cowboys’ offense has been towards the bottom of the league but the defense has helped a lot. They are top ten in points allowed, totals yards, and passing yards. The only thing they need to improve upon on that side of the ball is the rushing defense.

The Los Angeles Rams defense is the opposite, as they rank towards the bottom in points allowed, total yards, and passing yards but ranks top ten in rushing defense. It has been a surprisingly slow start to the season for the Rams, as they are 2-2 and also rank towards the bottom in many offensive categories. Matthew Stafford hasn’t been that strong so far this season as he has failed to reach 300 yards in each of the first four games and he’s thrown six interceptions. The bright side of this team has been Cooper Kupp, who is on pace for another spectacular season as he’s had three 100-yard games so far.

This is a huge game for both teams as we enter NFL Week 5. The Cowboys would love to stay above water and do it in good fashion with a win against the Rams as Dak is getting close to coming back. All eyes will be on this game and the Rams need to prove why they’re the defending Super Bowl Champions.

Other Games to Watch