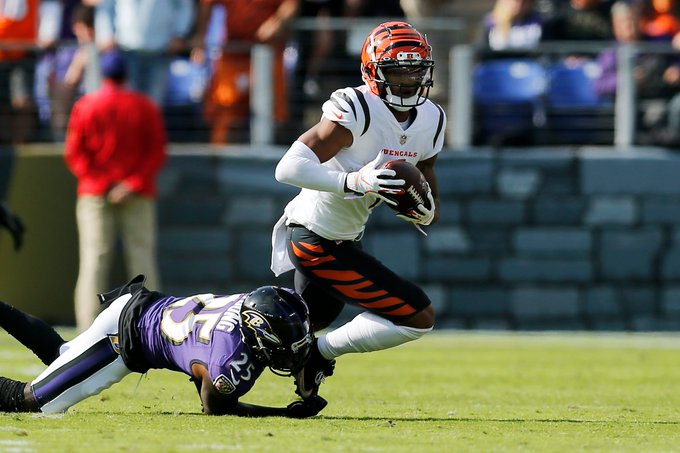 With the first game of the NFL preseason played Thursday, it is as good a time as ever to look forward to the regular season and the twists and turns that the new season will hold. That being said, let’s look division by division in the entire NFL and predict the outcomes.

Previewing and Predicting the AFC North

Coming off the back of a fairytale run to the Super Bowl, I think that the Cincinnati Bengals will remain on top of their game and find their way towards another AFC North division title. And, while I do not think that they make it back to the big game, I think that they do get 12 wins and the third seed in a highly-competitive AFC.

Their main strength is very clear to see: their high-powered offense. If Joe Burrow and Ja’Marr Chase can live up to the astounding performances of last year, then I have no doubt that another AFC North crown will be theirs again. This combination, combined with Joe Mixon’s abilities at running back and the depth of Tyler Boyd and Tee Higgins at wide receiver, should be too much for most defenses to handle.

The Bengals do still have some weaknesses, namely their cornerback room as they still have Eli Apple as their CB2, though they drafted Cam Taylor-Britt. Their defense also has its fair share of high-level players, namely EDGE Trey Hendrickson, who managed 14 sacks last year, and their safety duo of Vonn Bell and Jessie Bates III, who have the potential to be the premier safety duo in the league.

Despite finishing bottom of the AFC North last season, I see no way that the Baltimore Ravens fail again, especially with the offseason that they had. I believe that they bounce back to an 11-win season and secure a wildcard place in a very competitive AFC.

Unlike the Bengals, the Ravens main strengths are their run game and their secondary. On the offensive side of the ball, former MVP Lamar Jackson leads a run game that has ranked top-three for the past two seasons, with his scrambling ability and running back J.K. Dobbins being the main workhorses in this offense. Their passing game, however, is a glaring weakness after they traded their WR1 (Marquise Brown) away to the Cardinals, which leaves sophomore Rashod Bateman to fill the role of a WR1 despite not being suited to playing that role in the NFL.

A healthy #Ravens squad is a difficult matchup for everyone within the division.

The Ravens did experience some defensive struggles last season, especially against Joe Burrow and the Bengals. But if star corner Marlon Humphrey bounces back next year, he could be a legitimate shutdown corner and has the ability to cover anyone in the league on his day. He could form a lethal cornerback duo with Marcus Peters who will play across from him if he recovers from his knee injury.

But their young safety duo of rookie Kyle Hamilton and Marcus Williams are a pair to watch for the future as they both ooze talent and could be a nightmare for quarterbacks for years to come. Their front seven is not as strong, but with big names such as Calais Campbell, Patrick Queen, and Michael Pierce at their disposal, this defense should be sure enough to carry a playoff contender.

A 9–8 prediction could end up being quite generous towards this Pittsburgh Steelers roster, who have their fair share of struggles on the offensive side of the ball. But if their defense can come together to be a top-five unit, they could easily reach and exceed this prediction.

IN BOZ WE TRUST: Steelers kicker Chris Boswell signs new contract which reportedly pays him as much as an AFC North rival. https://t.co/B75jYDld87 pic.twitter.com/oUu2qdMEAK

Their offensive unit is weak, to say the least. Their quarterback situation isn’t dire, but it isn’t great either with rookie Kenny Pickett, Mitchell Trubisky, and Mason Rudolph competing for playing time. While starting Rudolph would be the safest bet, he is the weakest of the three and could end up hurting them in the long run. Najee Harris is viewed by some as a top-10 running back and he will probably be the heartbeat of this offense given the uncertainty surrounding their passing attack.

As far as their pass catchers are concerned, they lost their WR1 in JuJu Smith-Schuster, who is off to Kansas City to make more TikToks. This leaves breakout star Diontae Johnson, Chase Claypool, and rookie George Pickens to fill his shoes, which should be too much of a sweat but could be challenging without Big Ben in town. The weakest area of this offense is the offensive line, with their unit ranking in the bottom five.

On the defensive side, they are a lot stronger. Reigning DPOY T.J. Watt returns alongside Cameron Heyward and Alex Highsmith, who make up one of the most fearsome pass rushes in the league. Their front seven will be boosted by the addition of Myles Jack from Jacksonville who will pair well with Devin Bush in the center of the field. And their secondary, led by star safety Minkah Fitzpatrick, is not the strongest unit, but it is good enough given that their front seven will disrupt the quarterback so much that there is not that much pressure on them anyway.

The main variable in this Cleveland Browns record is what happens to Deshaun Watson. If the current ban of only six games stands, this record could improve, but if the NFL’s appeal changes it to the whole season, this record could be a lot worse. But the rest of their roster should be good enough for at least five wins either way.

Their quarterback situation is the main talking point as if Watson doesn’t play, it would mean that Jacoby Brissett would become the starter, and with an 18–6 touchdown to interception ratio in his last full year as a starter, it can be seen that he will play a more game manager-esque role, where the team will win with him rather than because of him.

It helps that the Browns are also home to Nick Chubb, one of the league’s best rushers, who could also help significantly in Watson’s absence. Their pass-catching room, which consists mainly of Amari Cooper, Donovan Peoples-Jones, and David Njoku might be underutilized but it is strong nonetheless. And their offensive line is the least of their concerns as it is clearly one of the best, if not the best, in the league.

Their defense is also quite a strong unit, led by star EDGE Myles Garrett who is arguably the scariest pass rusher in the entire league. He is coupled, again, with Jadeveon Clowney and together they also have a good claim at being the premier EDGE rushing combo in the league.

Their linebacker core is led by sophomore Jeremiah Owusu-Koramoah whose great rookie season was overshadowed by Micah Parsons’ DPOY charge and his all-time great rookie season. The secondary is just as strong as the front seven with stars such as Denzel Ward and John Johnson III being coupled with Greg Newsome II and Grant Delpit, two young and promising stars that could make a huge impact this upcoming season.

Overall, the AFC North is one of the only divisions where every team is in contention for first due to the depth of talent that plays here. And, while I don’t believe any of these teams go on to win the Super Bowl, anything is possible at the end of the day.