The wrestling community is currently buzzing right now. Reports have just started circling that CM Punk is currently in talks to make an in-ring return.

For the first time in seven years, Punk is actually in talks about wrestling again. This is something that he hadn’t completely ruled out, but it seemed rather unlikely since Punk is very difficult to please.

How likely is this return? CM Punk is one of the biggest names in wrestling. So a return would do wonders for whoever may pick him up.

CM Punk Wrestling Return: How Likely Is It?

CM Punk was released from the WWE in 2014. He was released on his wedding day, which left a sour taste in the mouth of Punk.

Since then, he has wanted nothing to do with the company. Well, you can’t say that since he was an analyst for WWE Backstage when the WWE went to FOX Network for Smackdown.

Note though that Punk was working for FOX and not WWE, which is the only reason he took the job. He said he was happy to be able to critique the product without getting in trouble with WWE.

CM Punk hasn’t been in the ring since 2014. So will there be some ring rust when Punk comes back to the ring?

No. Why would anyone think that? If Punk were to return to the ring, it obviously would have taken much time and consideration. He noted that the only way he would come back is if someone pitched him a good story to tell, which may be the case here.

If he were considering an in-ring return, it would have taken much thought. So if he were to be thinking about this, he must have been training. Punk doesn’t just decide, “hey, I want to get back in the ring”, and start negotiations. He would have to get some time in the ring before negotiating a contract.

Now with these rumors swirling around, many people are wondering where the Straight Edge Superstar will land. So if you think he will end up back in WWE, then you aren’t a wrestling fan.

Everybody knows the tension between Punk and WWE, the WWE is the reason he left wrestling for so long. The long road schedule is part of what drove him angry with wrestling.

So if not WWE, then where? The next best thing. And the next best thing in wrestling right now is AEW. AEW has taken in many ex-WWE stars with open arms. Look at Jon Moxley and Cody Rhodes for examples. They are huge in AEW now.

CM Punk was huge in WWE, but AEW will use him the right way. Punk may not get his Wrestlemania main event that he so rightfully deserved, but he may main event Double or Nothing.

Now, what are the odds that CM Punk makes an in-ring return? The rumors have the wrestling world excited right now. According to Wrestlinginc.com, WWE higher-ups believe he is going to AEW, which I wouldn’t doubt.

Punk is going to get a huge pop no matter where he goes. Fans are back at full capacity. I’m sure Punk has been sitting around thinking about a return during the pandemic.

Wherever he may go, he will be in the main event scene. Maybe even take the belt off Kenny Omega in AEW. Who knows. Punk would work very well with Omega since they were both indy darlings.

As of right now, these are just rumors. So don’t get too excited just yet. There could be more news to come since the news has just broken. 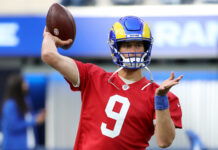