The connection fans feel to a particular stadium can often match the connection they feel with their favorite teams or players. Fans forge memories of particular games or athletes that are directly tied to the stadium where they witnessed these moments and saw these players perform.

Naturally, we all feel strong connections to places we visit where we spend time enjoying ourselves, cheering on our teams, and spending time with friends, family, and fellow fans taking in a game. Sometimes stadiums you may never visit are often instantly recognizable from watching live games or classic highlights. For example, someone who has never set foot in Chicago may be able to instantly recognize the iconic ivy wall at Wrigley Field.

While there are many legendary stadiums that no longer exist, there are also many classic stadiums that still stand, even though they aren’t still used in the way they were in their heyday. For example, the Houston Astrodome, the world’s first domed stadium, hasn’t had a major sports team tennant since the Astros moved out after the 1999 season. However, the Astrodome still stands inside the southern part of the 610 Loop while city leaders continue to debate what to do with the historic venue.

The Washington Coliseum in D.C. (previously the Uline Arena) was the site of the first Beatles concert in the U.S. Over the decades it served as the home to an array of basketball and hockey teams and even spent some years operating as a parking lot and trash transfer station. Currently, the building houses office space and an REI store.

Of course, there are many classic stadiums that no longer exist. And when these buildings crumble to the ground, it can often feel like a death in the family for fans. When places like Yankee Stadium or Ebbets Field are torn down, tears are often shed as people recall magical moments that transpired inside the stadium walls. The memories, however, do live on. So let’s take a trip down memory lane and recall a few classic stadiums that no longer exist.

Sure, the stadium saw its share of tough seasons for the Browns, but in the 50s and 60s Cleveland Stadium hosted five NFL Championship games, three of which the Browns won.

One of the most infamous events at Cleveland Stadium came on June 4, 1974 with the Ten Cent Beer Night promotion. The promotion was exactly what it sounded like and, long story short, fans rushed the field, a riot broke out, and the Indians had to forfeit the game.

Cleveland Stadium, which sat right next to Lake Erie, would occasionally experience weather problems, such as fog, that impacted gameplay. After a 1986 Indians game was postponed due to fog, opposing Red Sox pitcher Oil Can Boyd was famously quoted as saying “What do you expect when they build a ballpark on the ocean?”

Trivia Tidbit: The classic 1989 film Major League, which depicted a fictional version of the Cleveland Indians, was not filmed at Cleveland Stadium. Instead, it was filmed where the Brewers played at Milwaukee County Stadium (another ballpark on the list of stadiums that no longer exist). The two Major League sequels were not filmed in Cleveland either.

The Hoosier Dome found itself involved in controversy before it even opened. Most notably, there was the infamous under-the-cover-of-night maneuver that saw semi-trucks loaded up and sent from Baltimore to Indianapolis moving the Colts organization, quite literally, to its new city. However, the Hoosier Dome name itself created its own controversy before the stadium construction was even complete.

In preparation for the opening of the stadium the local Capital Improvements Board, which oversaw the stadium project, held a public naming contest for the dome. Over 50,000 name suggestions were submitted, with Indy Dome being the popular favorite. The board, however, narrowed the field down to six finalists, including the awesome-sounding Cosmodome and Megadome. From the pool of finalists they chose Hoosier Dome.

This created some outrage among the populace, which in turn led to a seemingly endless string of op-eds in The Indianapolis Star and failed attempts to legislate a name change. In 1994 the dome was renamed the RCA Dome, when the electronics corporation purchased the naming rights, and the hubbub surrounding the original name was largely forgotten.

The largest crowd in the Hoosier Dome was for Wrestlemania 8, which reportedly saw 62,167 fans in 1992. Wrestlemania was headlined by a Hulk Hogan vs. Sid Justice main event, which featured a surprise run-in by The Ultimate Warrior.

Following the 2007 season the Colts moved again, this time down the street to brand new Lucas Oil Stadium, sometimes referred to as “the house that Manning built”. In September of 2008, the air pressure-supported roof was deflated and in December the stadium was imploded.

Trivia Tidbit: A non-profit organization in Indianapolis acquired a portion of the roof fabric following its deflation and used the material to produce items such as wallets, bags, and even public art.

As stadiums that no longer exist go, for Pittsburgh sports fans of a certain age there is no stadium greater than Forbes Field. Forbes Field saw much Pirates baseball glory over the years, most famously Bill Mazeroski’s walk-off home run that won the 1960 World Series for the Pirates. Portions of the stadium’s outfield wall still stand in memorial to the long-gone ballpark and its home plate is encased on display in an academic building on the University of Pittsburgh’s campus.

Midway through the 1970 season, the Pirates played their first game at Three Rivers Stadium. This facility was a highly utilitarian structure designed as a home for the Pirates and the Steelers, with artificial turf and a non-descript round shape. This cookie-cutter style was very much en vogue at the time, as can be seen in the nearly identical designs of contemporaries like Riverfront, Busch Memorial, and Veterans Stadiums.

Before the opening day game at Three Rivers Stadium even started, a fan was hit by a batting practice ball that flew outside of the playing field. This resulted in extended litigation that ultimately made its way to the Pennsylvania Supreme Court. And, to boot, the Pirates lost the game.

Despite this inauspicious start, Three Rivers Stadium did go on to see more than its fair share of glory. Over its lifespan the stadium witnessed several World Series games (including the first night game in World Series history in 1971), the Immaculate Reception, and Roberto Clemente’s 3,000th hit.

In December of 2000, the Steelers played their final game at Three Rivers and the stadium was imploded the following February, joining Forbes Field on the list of stadiums that no longer exist. The Pirates moved on to PNC Park and the Steelers to Heinz Field.

Trivia Tidbit: The official website for Three Rivers Stadium (3riversstadium.com) was inexplicably still in existence up until a year or so ago. It basically sat frozen in time for a couple of decades. At present, however, the site sells steroids marketed to bodybuilders.

The Kingdome was originally planned as a home for the short-lived Seattle Pilots Major League Baseball team. The Pilots moved to Milwaukee after a single season in Seattle, yet the Kingdome project moved on with the hope that Seattle would get a pro team of some variety. The sports fans of Seattle had their prayers answered when the NFL awarded the city an expansion team and in 1976 the Seahawks started playing their home games in the Kingdome.

The next year the Mariners held their inaugural season and the Kingdome was their home as well. For the first nearly 20 years of Mariners baseball, the team didn’t achieve a winning record and the attendance at games wasn’t great. The losing record was part of the reason for the poor attendance, but the stadium itself was also a factor. The layout for the baseball stands was such that some seats didn’t provide a view of the entire field and the poor acoustics of the dome lead some fans to refer to the stadium as “The Tomb.”

Shortly after the arrival of Ken Griffey, Jr. the Mariners fortunes changed, peaking with the unforgettable Game 5 victory over the Yankees in 11 innings to win the 1995 American League Division Series. However, problems with the roof plagued the Kingdome during its final years, including an incident where tile fell from the roof prior to a game. This ultimately led to a repair project in which two contractors were tragically killed in a crane accident.

In happier times, the Kingdome played concert host to a number of legendary musical acts, including Led Zeppelin, The Rolling Stones, and Pink Floyd (and some less-than-legendary acts like Smashmouth and Chumbawamba). The Foo Fighters never played a show at the Kingdome, but they did memorialize it in their song New Way Home.

1999 represented the final season for the Seahawks and Mariners in the Kingdome, with the Mariners leaving for their new ballpark (known at the time as Safeco Field) halfway through the season. The last home run hit at the Kingdome was by Ken Griffey, Jr. Less than a year later, in March of 2000, the Kingdome was demolished.

Trivia Tidbit: Michael Jordan’s iconic free throw line dunk is often mistakenly thought to have happened at the Kingdome. While the 1987 NBA All-Star Game did take place at the Kingdome, the 1987 Slam Dunk Contest took place the night before at the arena then known as Seattle Center Coliseum.

Among stadiums that no longer exist (and, frankly, including those still standing) Sick’s Stadium in Seattle may have the most unfortunate name. The stadium, which conjures feelings of a tummy ache, was named after Emil Sick, a businessman who owned several baseball teams in the Pacific Northwest.

For most of its existence, Sick’s Stadium (later called Sick’s Seattle Stadium and Sicks’ Stadium) was the home to the minor league baseball Seattle Raniers/Angels. When Seattle was granted an MLB franchise in 1967, Sick’s was chosen as the temporary location for the Pilots to play until the Kingdome was completed. Earlier in the 1960s, both the Cleveland Indians and Kansas City Athletics considered relocating to Seattle, but the poor conditions at Sick’s Stadium contributed to their decisions not to move to the Emerald City.

Things got off to a rocky start immediately for the Pilots franchise, when many fans had to wait until the 4th inning on opening day to get seated because some seats were still in the process of being installed as the game began. Obstructed view seating, abysmal locker room facilities, and sightlines that prevented announcers from viewing all of the action on the field caused great distress for the Pilots ownership group and Major League Baseball.

The less-than-spectacular accommodations at Sick’s Field for the players and fans alike helped contribute to the bankruptcy of the Pilots and their move to Milwaukee the next season to become the Brewers. Seattle did of course get Major League Baseball back a few years later with the Mariners at the aforementioned Kingdome.

Trivia Tidbit: On September 1, 1957 Elvis Presley played a concert at Sick’s Stadium. The King, delayed by another show earlier in the day in Tacoma, took the stage nearly two hours later than scheduled. From an elevated vantage point outside of the stadium, a 14-year-old Jimi Hendrix watched the performance. Hendrix himself would later play a concert at Sick’s. 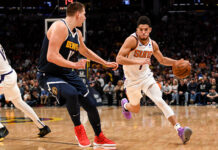 Will The Phoenix Suns Return To The NBA Finals In 2022?