Believe it or not, the new NBA season is just under a month away. The memorable 2019-2020 season wrapped up a little over a month ago. With the draft behind us and free agency on its back nine, it’s almost time to look ahead to the next phase. The amount of movement around the league thus far makes this upcoming season all the more interesting. How will some of these moves pay off? Let’s take a look at some 2021 Western Conference predictions for Playoffs.

The reigning NBA Champion Los Angeles Lakers are enjoying a successful offseason to this point. They’ve added to their depth by trading for Dennis Schroder and signing the reigning Sixth Man of the Year Montrezl Harrell in one of the more shocking moves this offseason. Although they lost a few key pieces in Rajon Rondo and Dwight Howard, the team got younger and more versatile which add another layer to their depth.

As LeBron James tallies an 18th season under his belt, it’s anyone’s guess when he will take that step towards slowing down and let go of the throne. Coming off a fourth NBA Championship, is The King satisfied with his resume as he approaches age 36 in December? While LeBron may take a few nights off due to load management this season, the Lakers added enough depth around him to take some of the pressure off throughout the regular season. It should be enough for the Lakers to sit atop these 2021 Western Conference predictions.

The first bold prediction of these 2021 Western Conference predictions. Last season, the Portland Trail Blazers were on the verge of missing out on the playoffs altogether, had it not been for Damian Lillard’s phenomenal performance in the bubble. But the Blazers are enjoying themselves a strong offseason, adding weapons in just about every department. The team swapped Trevor Ariza for Robert Covington, a massive upgrade in the team’s frontcourt as the prototypical 3-And-D wing. The team also traded for Enes Kanter at his small salary of just $5 million a year, providing some rebounding off the bench.

Portland also signed big man Harry Giles, who was not going to hit his ceiling in Sacramento surrounded by their abundance of other bigs. Not to mention the Blazers also have Jusuf Nurkic back in tow. A year after an underwhelming final standing in 2020, the Blazers have reloaded their roster into a unit that can compete for an entire regular season and sit amongst the top of the Western Conference in 2021.

Very few teams in the Western Conference are going to be tougher to judge in 2021 than the Los Angeles Clippers. The team disappointed greatly in 2020, and their offseason to this point hasn’t been as drastic that predicted. The team parted with Doc Rivers and hired Tyronn Lue as their new head coach, which may allow stars Kawhi Leonard and Paul George to play to their strengths more, which is an overall plus for the team.

The Clippers swapped Montrezl Harrell for Serge Ibaka, Leonard’s former teammate in Toronto that helped him win an NBA Championship back in 2019. Despite great controversy and dysfunction in 2020, a reset might be what the Clippers need. They know what did not work for them, and they may have eliminated all unnecessary distractions behind the scenes (if you are not aware of the Paul George-Doc Rivers personal history).

While many would like to move the Denver Nuggets up in the Western Conference Standings in 2021, the team may just lack the star power that is necessary to do so. Jamal Murray emerged as a breakout star in the bubble. His offensive output was a marvel to behold, as it propelled the team to the Western Conference Finals, but wasn’t enough to surpass the Lakers.

The Nuggets lost a vital piece of their rotation in Jerami Grant as he signed with the Detroit Pistons this offseason, seeking out a bigger role with more money. That void could be filled and then some, if Michael Porter Jr can take another leap in his second (*third*), NBA season. The Nuggets have one of the brighter futures in the NBA, as they are on the cusp of a Big Three in Nikola Jokic, Murray, and Porter. Denver also added another young piece in hopes of rounding out their young core by drafting RJ Hampton in this year’s draft. If the team can play to their full potential, then maybe they do climb an extra seed in the Conference Standings this season.

While many may see this as a surprise, do not discredit Luka Doncic’s capabilities. It should not be a stretch to believe that Doncic can carry a team in a loaded Western Conference to a fifth seed, maybe even higher. While the team was not the most talented as a whole, Doncic was largely responsible for the team producing one of the most efficient offensive outputs from a team in NBA history last season.

The Dallas Mavericks didn’t make much noise in the offseason. They added sharpshooter Josh Green in the NBA Draft as well as Tyrell Terry, who will provide some added depth at the point guard position.

Doncic helped elevate their roster last season, helping Kristaps Porzingis enjoy his strongest season since his return from injury, and the team’s role players were able to hone in on their skill set while Doncic carried much of the load. If Dallas were able to secure a fifth seed in the Western Conference or higher, it may bolster Doncic’s MVP odds for the 2021 season.

The Golden State Warriors 2020-21 season may be written for them before it even starts. The team received the devastating news that Klay Thompson will miss a second consecutive full season as he was diagnosed with a torn Achilles tendon. The NBA is a better product as a whole with Thompson in it, and it is a shame that he will miss out on another campaign as the Dubs look to return to NBA glory once again.

That being said, the opportunity is there for Stephen Curry to take back the mantle as the league’s best point guard and the only unanimous MVP in league history. Curry’s contributions will be counted on even more with Thompson sidelined. His MVP odds should be through the roof, as Golden State added a little more depth to their team over the last year, which should be enough to secure a playoff seed.

This season could go one of two ways for the Warriors. Either the shortened offseason will be disastrous as Curry needs added time to rehab or if the rest of the roster obtains a few bumps and bruises along the way. Or, Curry steps right back in where he left off and elevates the players around him for at least an enjoyable run, even if it ends in failure without one half of the Splash Bros.

The Utah Jazz have flown under the radar this offseason. Their big move has been reuniting with Derrick Favors as he provides the team with added depth at the big man position after losing Tony Bradley. The Jazz have a serviceable roster that should ensure a playoff seed in the Western Conference, but likely will end just like every other season in recent memory.

Donovan Mitchell is the team’s future. He proved that in the NBA bubble during his clash with Jamal Murray and the Denver Nuggets. While the Jazz fell short, it established Mitchell and company as a force to be reckoned with on any given night. The best the team can hope for is that Mitchell takes that next leap especially after his massive extension he received this offseason. In addition to that, they better hope the relationship between Mitchell and Rudy Gobert is reconcilable and that is does not break the team apart.

This is the most interesting prediction to this point. The Houston Rockets’ future looks extremely uncertain with James Harden and Russell Westbrook presumably on the move and the team moves to a rebuild. However, trade talks have slowed to almost a halt. It is becoming more and more likely that the next uniform the duo puts on is one that says Houston along the front and the team runs it back at least one more season.

The Rockets also took a gamble on DeMarcus Cousins, as they threw out their small-ball scheme for a former All-Star who missed out on all of the 2020 season. If all goes according to plan, then the Rockets will have a strong and capable big man to pair with the former MVPs in the backcourt. Assuming the team remains intact this year, then the Rockets should have enough talent to return to the Western Conference playoffs in 2021.

Even if they do not make it to the playoff standings and break up their stars, the returning assets that Houston could get may still be enough, specifically if Harden is dealt to the Brooklyn Nets. That haul is going to be perhaps the best they can receive. It also depends on what the team can get for Westbrook. His market is incredibly uncertain as far as a return package goes.

The Los Angeles Clippers Should Be The West Favorites, Especially With Playoff Rondo 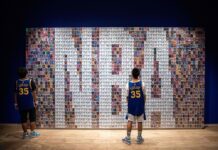