The seventh annual Big 12 vs SEC Challenge will take place on Saturday as it will be all ten Big 12 teams vs ten SEC teams. The Big 12 leads 35-25 in the yearly event after going 6-4 last year. If both conferences win five games each, the team that won the previous year will win the challenge. Ever since it began, everyone has been looking forward to this and it has been worth it every year. Bragging rights are on the line as the Big 12 vs SEC Challenge begins.

Not only is this the lone game in the Big 12/SEC Challenge that features a ranked vs ranked match up, but it’s also the only game in the country that features that. Kentucky is 14-4 and is coming off a ten-point win over Georgia. Every time people believe in this team, they fall and have losses to teams like Utah or South Carolina. They are currently on a two-game winning streak and this game would be a huge victory. They are led by Nick Richards, who is averaging 13.7 ppg and almost eight rebounds a game, and Ashton Hagans, who is averaging 13.6 ppg and seven assists a game.

On the other hand, Texas Tech is 12-6 and coming off a double-digit loss at TCU. They’ve lost three of their last five. A win against Kentucky would give them confidence and mask the loss vs TCU. Their leading scorer, freshman Jahmi’us Ramsey, is averaging 15.5 ppg and is the second leading rebounder on this team. Kentucky leads the all-time series 4-0 but they haven’t played since 1994.

Florida has not been the same team since the beginning of the season. They’ve only lost six games which aren’t bad but they didn’t live up to the standards or hype we gave them. This game obviously will be their biggest test of the season. Florida has one advantage in this game and it’s that they’re at home. Kerry Blackshear Jr has really stepped up for this team. He’s averaging 14.8 ppg and 8.7 rebounds. He’s been what Florida has needed the whole year and they need more to step up.

One loss Baylor started the week as the new #1 team. Baylor only has two players who are averaging over ten points a game but they have other players scoring consistently like Freddie Gillespie, who is nearly averaging a double-double. Their defense is another part of the reason why they keep winning. Over their past 11 games, they’ve only allowed 60+ points twice. #1 teams have a trend of losing at-least-once at the top. Baylor is trying to escape that at Florida which won’t be easy but Florida isn’t the same.

Kansas blew-out Kansas St 81-60 in their last game but it came with some consequences. At the end of the game, Kansas State’s DaJuan Gordon stole the ball from Kansas forward Silvio De Sousa when dribbling out the clock. Gordon was going to score, then De Sousa went up and blocked his shot. After he did so, he stood over Gordon while he was down and that sparked the fireworks. De Sousa was suspended 12 games and his teammate David McCormack was suspended for two games. On Kansas State’s side, James Love was suspended for eight games while his teammate Antonio Gordon got three games.

Tennessee will look to land a bigger blow to Kansas and shock the #3 team in the country. They blew out their last two opponents by at least 20 points. Kansas, on the other hand, is coming off of three wins in a row by double-digits. It will be an interesting one to watch as Kansas tries to rebound after what took place last game.

The SEC has been on the rise the past couple of years but it still doesn’t get the recognition as the others. A win would be huge for the conference if they can beat a conference like the Big 12. The SEC put up a good fight last season but it wasn’t enough. A sweep is highly unlikely, but if that happened, the record would be tied. Saturday will be very fun to watch and we can’t wait for it to get underway. 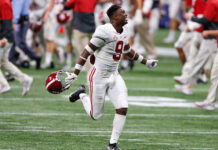