NFL fans are in for a little treat Sunday. Two NFC powerhouses will clash for a chance to be dubbed the unofficial king of the conference. The Green Bay Packers and Dallas Cowboys were hoping to come into this one undefeated, but week four losses from both teams make this match-up that much more significant. Whoever loses will quickly be considered to be slipping, by some critics.

There’s a bit of history as well considering leading up to this NFC showdown. In the postseason, particularly, how can we forget the 2014 divisional-round game where Dez Bryant didn’t make “The Catch”. But those were the days when Tony Romo was still quarterbacking. Backtracking more recently to the 2016 playoffs, Aaron Rodgers put a dagger through the Cowboys’ hearts in the divisional round. That was Dak Prescott’s rookie season, and a few things have changed since then. It’s safe to say both teams have their hands full come Sunday.

The biggest storyline heading into Packers and Cowboys showdown is the potential absence of Davante Adams.  Adams is suffering toe turf which isn’t serious but bothersome enough to keep him out for the week. The Packers wideout has been one of the most productive players at his position over recent years. In the course of three games, he’s averaged 12 targets and amassed 350 yards but has yet to find the end zone. His presence on the field makes a massive difference, and ultimately softens things up for the Cowboys’ Secondary. Guys like Marquez Valdes-Scantling and Geronimo Allison will have to step up.

There is a lot of young talent to like on this Packers defense. Jaire Alexander looks to be one of the up and coming shutdown corners in the league. Pro Football Focus has him graded as the best in coverage for cornerbacks so far this season. Kenny Clark is a massive body on the interior capable of shutting down plays. Za’Darius Smith and Preston Smith have also given Green Bay a consistent pass rush to finally rely on. But the problem lately has been stopping the run.

Last week especially, the Packers gave up 176 yards on the ground to the Philadelphia Eagles. Philadelphia’s line is among the best, and it showed no resistance from Green Bay and gaping holes because of it. Now the Packers have their hands full yet again facing an elite back in Ezekiel Elliott.  Oh, and it just so happens the offensive line for Dallas is pretty top-notch, including three All-Pros.

Dallas certainly got some early season hype after their first three victories. The New York Giants, Washington Redskins, and Miami Dolphins all became victims of a fresh approach offensively from 32-year-old coordinator Kellen Moore. Moore, a former backup QB for the Cowboys, instills play-action often; they account for over 30% of the teams’ pass plays. It allowed the field to open up more for Prescott in every game except Sunday night’s stagnant performance. It was his first time not throwing for a touchdown since Dallas was shut out against the Indianapolis Colts last December. If there was any creativity prepared for the offense to display, it was overshadowed by an excellent all-around game-plan from the New Orleans Saints. In a game where points came at an absolute premium, New Orleans edged it out 12-10.

Overall, however, Dak Prescott has played very well through a quarter of 2019. He’s limiting turnover worthy throws and holds the 4th highest passer rating in the league at 113.7. With the young stud receiver Michael Gallup expected to be back in the lineup, Amari Cooper and Randall Cobb can find easier ways to break away from Green Bay’s defensive backs. That’s of course if Prescott isn’t pressured quickly from his blindside. His prime protection, left tackle Tyron Smith will be out with a high-ankle injury that doesn’t appear to be serious.

I don’t think there’s any surprise with these two teams being among the best in the NFC. I also wouldn’t be shocked to see a rematch of this game in January. Over recent years, their meetings have been hard-fought and always intriguing, but one team comfortably has the other’s number. Since 2009, the Packers are 7-1 against the Cowboys with Aaron Rodgers throwing for ten touchdowns to just one pick. Rodgers has found ways to decimate most secondaries but he’s a little extra sharp against Dallas. Regardless, it will be a quality win for whoever walks away victorious from AT&T Stadium on Sunday. 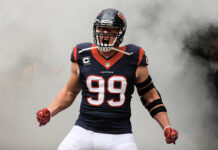