Before the 2018-2019 NBA season, the talk of the city of Los Angeles went to the Lakers and their new star player in LeBron James. The Clippers seemed like they were the forgotten middle child excluding the fact that they were over .500% last season. This season, the Clippers have shocked everyone by ranking first in the Western Conference more than 20 games into 2018-2019. As the season progressed, the Western Conference got more aggressive for all teams. The Clippers remained consistent, but they were found their most recent streak of success through a very productive month of March. In the entire month of March, the Los Angeles Clippers (47-33) accounted for a 13-2 record. This is the best record in the NBA in a span of 15-games throughout the season.

In the month of March, the Clippers were ranked first in the league in points per game (120 points). This was due to the fantastic packages inserted by head coach Doc Rivers and their team of under-valued players. This is the fourth ever team in NBA history to win over 45 games with no current or former All-Star. The Clippers have shot 41.7% from three-point percentage, which also the best in the league in the month of March. They were third in the league behind the Toronto Raptors and Golden State Warriors in field-goal percentage with 48.5%. Los Angeles was also stout on defense in terms in rebounding the ball as they accounted for 37.2 defensive rebounds per game in the month of March.

Their 120 points per game, 48.5% field-goal percentage, 41.7% three-point percentage, 48.1 total rebounds per game, 25.9 assists per game all are the highest in the month of March than the other months in the entire duration of the 2018-2019 NBA season. While teams like the Denver, Golden State, Toronto, and Milwaukee were all battling it out for the top spot, the Clippers have been quietly rising the ranks of the Western Conference. The Clippers also have an array of great players that can take control of the game each game. These players range from starting veterans like small forward Danilo Gallinari and point guard Patrick Beverley, excellent bench players in shooting guard Lou Williams and power forward Montrezl Harrell, and rising rookies in point guard Shai-Gilgeous Alexander and shooting guard Landry Shamet.

Every game is different from the Clippers in terms of who will be the impact players of the game. This involves a gameplan from Rivers and which player is on fire from night-to-night. There are four players for the Clippers that seem to consistently drive the team forward each night. This is, by far, one of the healthiest seasons for Gallinari as he proves himself as an underrated NBA impact player and a leader for the Clippers. He has missed of last season with the Clippers due to a knee injury and some before in his career. So far this season, Gallinari has played in 68 games which is the most since the 2009-2010 NBA season. In the month of March, Gallinari has accounted for 23.9 points per game on a 52.1% field-goal percentage and 45.3% three-point percentage.

Rookie point guard Shai Gilgeous-Alexander has been a dominant defender for the Clippers as well as a consistent offensive provider. In the month of March, he led the NBA in three-point percentage with 59.4% as he accounted for 14.2 points per game, 4.5 assists per game, and 1.4 steals per game. He is the youngest star of the Clippers as he is likely going to be a first-team All-NBA rookie selection. What makes him a more reliable player for the Clippers is his instincts and his shot-selection to make shots.

Projected sixth man of the year winner in Lou Williams has been one of the most clutch shooters for the Clippers for the past two seasons. He has accounted for 21.7 points per game on a 46.3% field-goal percentage and 4.9 assists per game in March. Williams is a fast and aggressive player that can drive to the net and unselfishly passes the ball. A bench player that might challenge Williams for the sixth man of the year award this season is his own teammate in power forward Montrezl Harrell. Ever since he joined the Clippers from the trade from Houston Rockets, he has been a monster attacking the basket. This season is easily his best season by accounting for 18.3 points per game on a 57.1% field-goal percentage, 6.7 rebounds per game, and 1.2 blocks per game.

Clippers Defied All Odds of Their Worth

Before the 2018-2019 NBA season started, the Los Angeles Clippers valued near the bottom of the Western Conference. The Westgate Las Vegas SuperBook projected the Clippers at 33 total wins in the season. This was due to lack of an NBA All-Star (current or former) despite the high-leveling of coaching from head coach Doc Rivers. Many expected the Clippers to be on the rebuilding process as they prepare for the 2019 NBA offseason as they will have two max contracts to offer. Even though general manager Frank Lawrence and team advisor Jerry West are still on the lookout for an All-NBA player, they did not fold before the season even started.

The veterans and the rookies are too talented to tank the season to wait for a savior to come to the Clippers. They took matters into their matters including the players that were traded before the NBA trade deadline. It is important to note that small forward/power forward Tobias Harris, center Boban Marjanovic, and shooting guard Avery Bradley helped build that mentality for the Clippers before they were traded to another team. Time will tell how the Clippers will proceed in the 2019 NBA playoffs. If a team of undervalued players and rookies defy the odds to make the Clippers the better team in Los Angeles and build a playoff team, then it will be interesting to see what they turn into in the offseason. 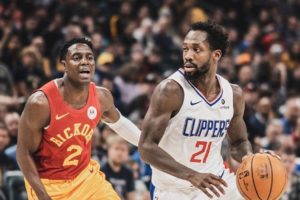