The next quarterback analyzed in this series of way too early scouting profiles is Drew Lock, quarterback for Missouri Tigers. Lock is going to be the most polarizing quarterback of this draft class. Having set an SEC record for passing touhdowns and boosting maybe the biggest arm of this class, Lock has some accolades on his resume. He is one of the top seniors entering the season and he will have a lot of eyes on him this season.

Arm strenght: Drew Lock’s arm strenght pops on screen as soon as you start watching his tape. He is just such an effortless thrower and throws with impressive zip on his balls.

Tight spiral: Lock throws a beautiful ball to all levels of the field. He is almost a guarantee to throw a perfect spiral on every throw, which is very impressive.

Ball placement on short passes and endzone: He puts the ball right on the money with touch or with a bullet pass on short throws (8 yds or less). In the redzone he throws a very accurate fade route to the back of the endzone consistently.

Size: Lock has the protoypical size scouts look for in a quarterback (6’4, 225 lbs).

Touch: Lock not only throws with impressive touch on short throws but also on passes over the middle behind a linebacker or a safety.

Footwork: Lock has no consistency on his footwork, some plays he doesn’t even move and when he does, his footwork is all wrong. He compensates with his big arm but these kinds of technical things are what makes the difference in the pros.

Ball placement on deep balls: Lock throws effortlessly deep, he makes some throws other quarterbacks wouldn’t dream of making but he also misses quite a lot. He underthrows his receivers deep quite often and given his arm strenght, it is probably related to the timing of his throw and miscalculation on where his receiver will be.

Going through progressions: Lock locks on his first read (no pun intended) very often, and usually does only half field reads. He needs to show improvement in this area if he wishes to start in the NFL.

Decision making: Lock threw 13 interceptions in 2017 though some where not his fault. (tipped passes…) Still tries to put the ball on some very small windows while there are better options elsewhere. This is probably related to his gunslingler mentality of thinking he can make every throw.

What I want to see from him this year:

Lock has to get better in a lot of areas. He has some very rare traits that will make him a hot commodity in April. He needs to at least try to fix his footwork and work on his deep ball accuracy (which he showed he can hit sometimes). For the mental part, he needs to show he can go through progressions and make better (and quicker) decisions. He is truly a player to wacth next year.

Check out the other articles of the way too early scouting profile series: Easton Stick, Justin Herbert and Jarrett Stidham. 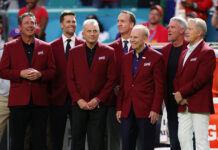