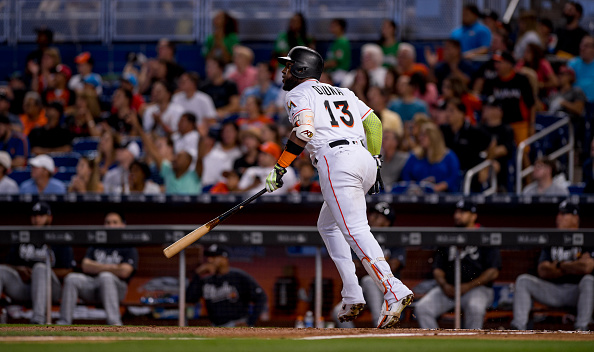 Adam Duvall is a big time power bat. He has hit a combined 64 home runs the past two seasons. He also gets on-base at a better clip than advertised, as he has a career .296 OBP. Defensively, Duvall is also better than most expect he is.

Marwin broke out in 2017, as he put up MVP-like numbers. Gonzalez hit .303, drove in 90 runs, had 34 doubles, 138 hits, and 23 home runs. He has always been a consistently average performer, however Gonzalez put it all together in 2017. He played a big part in the Astros World Series run. Gonzalez is only 29, and should continue his success in 2018 in a very strong Astros lineup.

The Nationals gave up a ton for Adam Eaton. Did they get their money’s worth? Only time will tell, as he only appeared in 23 games in 2017. For his career, Eaton is a .284 hitter. You aren’t going to see much in the power department from Eaton, however he gets on base, a lot. The past three seasons he has 25+ doubles and 145+ hits. Keep an eye on Eaton to take home the AL Comeback Player of the Year in 2018.

The Notre Dame product finished third in 2017 Rookie of the Year voting. In 147 games, he hit .293 with 24 home runs, 26 doubles, 159 hits, and 78 RBI’s. In the second half of the 2017 season his slugging percentage fell a bit, as pitchers adjusted to him. It will be very interesting to see if Mancini is able to make the adjustment heading into the 2018 season.

Khris Davis is a high power bat, and a home run hitting machine. He has 85 home runs and 212 RBI’s the past two years combined. Davis hits home runs at an unreal pace, though he also strikes out a whole lot. The past four seasons, Davis has over 120 strike outs. However, he certainly makes up for that with his power.

Benintendi is only 23 years old, and is producing at an extremely high level. In 2017, he hit .271 with 26 doubles, 20 home runs, 20 stolen bases, and 90 RBI’s. Benintendi is an absolute stud, and does just about everything for the Red Sox. He is already producing at an great level, and he is only going to get better.

It pains me to put any steroid user on this list, but Braun has connived to produce. Obviously his best days are behind him, but Braun is still getting it done in Milwaukee. He is a career .302 hitter* with 302 home runs* and 345 doubles*.  Braun has had injury problems latter in his career, but he is still a top outfielder in baseball.

Upton deservedly so signed an extension with the Angels this offseason. He has been an offensive powerhouse the past couple of seasons, last year included. In 2017, he hit 35 home runs and drove in 109 RBI’s. Over his eleven year career, he has a total of 256 home runs. Upton is going to enjoy hitting in a lineup with Mike Trout and Shohei Otani in 2018.

Cespedes is an animal, when healthy. Since joining the Mets he has done nothing but hit the ball. He is a .285 hitter with 65 home runs. In 2017, he played in only 81 games but still hit 17 home runs. Cespedes also has a cannon of an arm in left, one of the best in the game. He has been working out differently this offseason, in an attempt to stay on the field. If he can stay on the field, Cespedes should put up MVP-like numbers again.

Ozuna finally broke out and received the recognition he deserves in 2017. He put up MVP-like numbers, with career highs in average (.312), home runs (37), doubles (30), RBI’s (124), hits (191), and slugging percentage (.548). Ozuna was traded away from the massive shadow of Giancarlo Stanton, and should finally receive the praise he deserves.