Every sport and every team has a defining moment. People remember where they were and what they were doing when these moments happened. We’ll take a look at 5 different moments sports fans need to see again.

The Spurs and Rockets were facing off a couple weeks into the 2004 NBA season. The Rockets, with McGrady and Ming, beat the Spurs 81-80. At the moment, McGrady had 20 points for the game, then he hit a 3 to make the score 76-71. After a pair of free throws were made by the Spurs, McGrady came off a screen set by Yao, and Converted a 4-point play. This made it 78-75. Once again, the Spurs knocked down a pair of free throws and the score was 80-75. The Rockets used their last timeout to advance the ball to midcourt, and with no timeouts, got it to McGrady again for another 3, and it was now 80-78. The Spurs inbounded with 11.2 seconds to play when Brown turned it over and it was picked up by McGrady. With 1.2 seconds left, Mcgrady drilled the 4th 3-pointer for the win.

This is likely something we might not ever see again. With today’s NBA, I wouldn’t put it past anyone though. There are so many players capable of pulling this off that we would love to see it again. We NEED to see it again.

Player Most Likely to Pull it Off: Kyrie Irving or James Harden

4. Boston Red Sox Come Back from 3-0 to Beat the Yankees.

The Greatest rivalry in baseball history squared off for the second year in a row in 2004. The previous year had been heartbreaking for the Red Sox, who lost in 7 games on Aaron Boone’s walk-off homerun. In 2004, the Sox were looking for revenge, but instead hit the Yankees buzzsaw. They dropped the first three games, including a 19-8 blowout at home in game 3. Before this series, no team had ever come back from a 3-0 deficit in the MLB Playoffs. Game 4 was a back and forth battle, won by the bang-bang stolen by Dave Roberts and the clutch bat of David Ortiz. Papi put the Red Sox on his back with a walk-off homer in the 12th, and again had a game tying HR in the 8th of game 5. He would then drive in the GW RBI in the longest playoff game in MLB history.

Then Game 6 was all about Curt Schilling. Battling a gruesome ankle injury, in which he had a stabilization procedure done, he pitched 7 innings of 4 hit, 1 run baseball. Bloody sock and all, Curt Schilling had quieted Yankee Stadium, all 56,128 people in attendance. Before game 7, questions swirled all around. Then, the impossible happened. An improbable offensive onslaught led by Johnny Damon of all people ensued. Damon was 3-6 with 2 homeruns, including a grand slam. The Sox went on to win 10-3 and complete the biggest comeback in MLB history. The curse had been lifted, and the Red Sox went on to win the World Series for the first time in 86 years.

Most Likely to Pull it off: Chicago already did it, so Cleveland or Los Angeles Dodgers

The Leafs were up 4-1 in the 3rd period. They had it in the bag, or at least they thought they did. At the time, it was looking very bleak for the Bruins at home. They were down 4-1 in the 3rd period in game 7. Most teams would’ve packed it up, but the Bruins weren’t done. Nathan Horton converted on an assist from Milan Lucic with 10:42 left to make it a 4-2 game. Then, with about 2 minutes left, the Bruins pulled their goalie Tuukka Rask. The change proved effective for Boston as Lucic scored the next goal to make it 4-3. Less than 15 seconds later, Patrice Bergeron would tie the game at 4 with 51 seconds to play, ultimately putting the game into overtime.

Then, as if fans thought it couldn’t get worse for Toronto, Patrice Bergeron struck lighting again for the game winner, about 6 minutes into the OT period. This ended the playoff run of the Maple Leafs playoff run, and propelled Boston to the East Semis. Boston went on to lose the Stanley Cup Finals to the Chicago Blackhawks in 6 games.

Tom Brady walked to line of scrimmage, staring directly into the face of a 28-3 deficit. Then, taking the snap, he dropped back, and dumped it to James White who took it in for the score. The extra point attempt was no good, and it was 28-9. The next Patriots drive started at their own 13. They drove 72 yards in 5:03 and converted on a Gostkowski field goal and it was 28-12. On the ensuing Falcons drive, Matt Ryan fumbled on 3rd and 1, and it was recovered by the Pats. Then Brady converted the turnover into points 5 plays later. After Danny Amendola came up with the TD and James White scored the 2 point conversion and it was 28-20. All of a sudden, the Patriots were right back in it.

After that the Falcons just had to run the football, and run out the clock. Then their drive was stalled again, this time by a sack and holding penalty. Then they were forced to punt it back to Brady and the offense. With the greatest quarterback of all time on their side, the Patriots marched down the field. The play of the drive was an amazing catch by Julian Edelman with 4 defenders around him. The play held up on the review and the Patriots were deep in Atlanta territory. Then, just three plays later the Pats tied it on a James White TD. The Falcons GW-drive stalled out, they punted and the quarter ended. Then the Patriots won the coin toss and would march right down the field to score. James White scored the GW touchdown giving Brady his 5th ring, and completing the biggest comeback in playoff history.

Most Likely to Blow the Lead/Overcome it: Philadelphia Eagles/New England

Christian Laettner is the greatest college basketball player of all time, and he gave us one of the greatest CBB moments. He won 2 championships, played in 3 and was the most polarizing player in Duke basketball history. Then he was a gritty, tough player on the court. Because was easily one of the most hyped games of the year, as Duke faced Kentucky, this makes the list. UK had Mashburn, and Duke had Laettner. In 43 minutes played, Laettner was 10-10 from the field including a 3-pointer. Then, he was 10-10 from the charity stripe. People will argue that he should’ve been ejected after he received a technical foul for stomping on Aminu Timberlake. Although, he was only assessed with a single technical foul and was allowed to remain in the game. After the whole “stomp” fiasco, Laettner continued to punish Pitino’s Wildcats.

Then with 2.1 seconds left to play Kentucky led 103-102. Duke was coming out of a timeout, and had Grant Hill bring it in. Then, Laettner received an overhead pass at the foul line, dribbled, faced the basket and made the shot. Duke had beat Kentucky 104-103. Afterwards, for years to come, people would reminisce the shot, and wonder why UK didn’t do anything to prevent it. After the fact, it would leave UK fans baffled and angry for a lifetime.

Most Likely to do it Again: Luke Maye, PF/UNC, Grayson Allen G/Duke 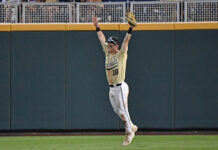