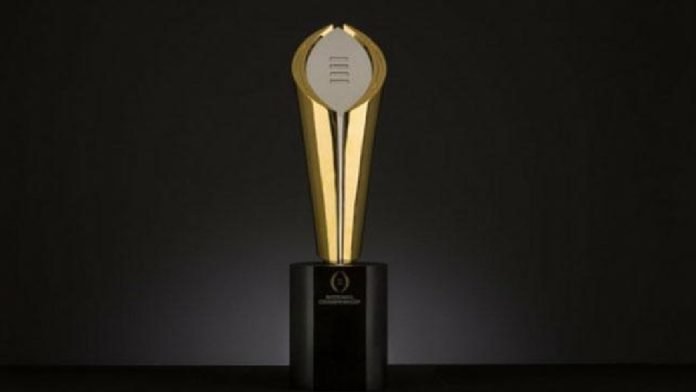 With the College Football season making a big turn towards the conference championships and playoff scenarios, the first College Football Playoff rankings came out on Tuesday. In a surprising result, the Georgia Bulldogs (8-0) have overtaken the Alabama Crimson Tide for the top spot in the rankings. With Alabama at the second ranking, the Notre Dame Fighting Irish (7-1) are third and the reigning National Champions in the Clemson Tigers (7-1) finish out the playoff bracket at the fourth spot. The #5 Oklahoma Sooners (7-1) and the #6 Ohio State Buckeyes (7-1) are the first two teams out of the playoff bracket.

The College Football Playoff rankings always come out before week 10 of the season since the playoff championship program overtook the BCS system starting in 2014. If the season ended today, the semi-final playoff match-ups would #1 Georgia vs. #4 Clemson in the Sugar Bowl and #2 Alabama vs. #3 Notre Dame in the Rose Bowl playing to reach the National Championship game. #7 Penn State (7-1), #8 TCU (7-1), #9 Wisconsin (8-0) and #10 Miami (FL) (8-0) finish out the top 10 rankings.

The #14 Auburn Tigers (6-2) are the highest ranked two-loss team in this year’s initial playoff rankings despite the recent success of the #15 Iowa State Cyclone (6-2) and their two top 5 ranked wins so far this season. Even though the Cyclones defeated #3 Oklahoma 38-31 in Norman, OK and #4 TCU 14-7 last weekend, the committee saw the two unranked losses from Texas and Iowa. The #18 UCF Knights are the only other undefeated team in the FBS. American Conference rival in the #23 Memphis Tigers joins the Knights as the only other non-automatic qualifying conference team ranked in the top 25.

This is three of the last four times that an SEC team has been ranked in the first initial CFB playoff rankings. Mississippi State was ranked #1 in the first ranking in 2014, Alabama grabbed last year’s top ranking in the first CFB playoff ranking and now the Georgia Bulldogs have taken the top spot in the initial ranking this season. The Ohio State Buckeyes, Alabama Crimson Tide, and the Clemson Tigers are the only teams that have been ranked in all 20 playoff poll rankings since it began in 2014.

Why the Georgia Bulldogs are ahead of the Alabama Crimson Tide

There are many attributes that the members of the College Football Playoff selection committee look into including strong wins, strength of record, current rankings of their past opponents, the balance of the team, performances of each game, strength of schedule, recent games, and head-to-head match-ups with other high ranking teams.

This is the first time the Georgia Bulldogs have been ranked #1 in any poll since week 2 of the 2008 season. Georgia’s 1-point win in week 2 at South Bend, IN against the #24 Notre Dame Fighting Irish is a big significant factor why the committee put them at #1, especially with Notre Dame now being ranked at #3. Although the committee praised the Tide’s thrashing of opponents, 1st overall defense (9.8 points allowed per game), QB play and the victory over #3 Florida State (now 2-5) in the beginning of the season, they feel the right ranking for the Tide is #2. The CFB playoff committee has stated that Georgia’s current resume over ranks Alabama’s initial resume.

This is only the initial College Football Playoff ranking, there will be time for the Alabama Crimson Tide. The Tide will have to play 3 more teams that are currently ranked in the top 25 (vs. #19 LSU, @ #16 Mississippi State and @ #14 Auburn). They have one of the most convincing remaining strength of schedules in the nation. If Alabama and Georgia win out then that will set up another #1 vs. #2 matchup in the SEC Championship. This season could be the first time that a conference could have two teams in the College Football Playoffs with the SEC potentially having both Georgia and Alabama in it.

A tight race after the #1 and #2 ranking

After Georgia and Alabama at the two top spots, there was a lot of debate about the remaining top 10 spots. Notre Dame (7-1) and Clemson (7-1) would respectively grab the 3rd and 4th ranking. An argument could be any of the top spots from #10 to possibly #11 with Oklahoma State. The #3 Notre Dame Fighting Irish have three top 25 wins over USC (by 35 points), NC State (by 21 points) and over Michigan State (by 20 points). When the committee discussed rankings involving a one-loss team, big ranked wins and the opponent they lost to helped make the final selection. Notre Dame’s one-point loss to Georgia might be the most convincing of the rest of the one-loss teams in the top 10. #4 Clemson also has three top 25 wins so far this season but have lost to an unranked Syracuse Orange team (3-3 at the time). That loss to Syracuse gave the committee enough disbelief to put Clemson at #3, but the three wins and the dominance of their defense helped their case for a playoff spot tremendously.

Involving the first two teams out of the playoff bracket picture, there was a good point for one to be higher than another. #5 Oklahoma has one loss to an unranked team in Iowa State (although currently ranked #15) while #6 Ohio State just came off a 1-point victory at #2 Penn State last weekend. Yet the Buckeyes’ one loss was to Oklahoma in week 2. The committee put the Sooners ahead of Ohio State based on their head-to-head matchup.

Penn State’s loss last weekend to Ohio State is a reasonable ranking for a team that has a well-balanced team both on offense and defense. The TCU Horned Frogs are one of the biggest surprise team of the Big 12, they are the 2nd highest Big 12 conference team in the top 25. The Horned Frogs have played a solid schedule so far with a decent non-conference schedule and two top 25 wins in a row against @ #6 Oklahoma State (by 13 points) and #23 West Virginia (by 7 points). What puts them further away than some of the other one-loss team counterparts is their stunning loss last weekend to the #25 Iowa State Cyclones. Despite being undefeated and playing in power 5 conferences, both #9 Wisconsin (8-0) and #10 Miami (FL) (8-0) currently find themselves at the bottom of the top 10 rankings. There are multiple reasons for their poor ranking. The dominance of the other teams have really been noticeable but it also due to the fact that Wisconsin and Miami have not played a top 25 team or a team that is currently ranked in the top 25. Both the Badgers and the Hurricanes will play more talented teams especially if they both reach their respective conference championships. Watch for the rankings, especially in the top 10, to be shaken up tremendously in the upcoming weeks.