Entering his fourteenth season with the New York Giants, Eli Manning has become as predictable as the morning sun rising everyday. But with every sunrise there is a sunset. With 215 consecutive games played as the NFL’s current “Iron Man”; it is difficult to see when Eli Manning will hang up his cleats, and let the sun set on his legacy.

With the Giants sitting at the bottom of the NFC East standings (0-4); Manning’s experience, grit and wisdom is needed, now more than ever. He is needed to right the proverbial sinking ship. During this unfathomable losing streak, all kinds of blame have been issued and solutions offered. The unwavering constant in this chaos has been Manning’s calm demeanor and positive attitude. He has never criticized, or pointed fingers at anyone, but has simply promised to “become better” and become a solution to the problem.

Eli Manning: Can He Save Big Blue?

Lately, Manning has been taken for granted, or seen as replaceable, by some of the Giants faithful. Let us remember though, that you do not realize what you have until it is gone. Manning is right here, right now. He will right the ship this season. The season is still alive and anything is possible in the NFL.

With his quiet leadership and stoic play on the field, there is no better man than Manning to lead the Giants into week five versus the visiting Los Angeles Chargers (also 0-4). Manning will get hit, pounded on, and beat up, but he’ll keep getting up and put his best foot, and arm, forward. This is a quality that will become contagious with his teammates and become the identity of the 2017-2018 New York Giants.

The beginning of the rest of the season starts this Sunday at MetLife Stadium. The Giants will get their first win. With this win, many more will follow. The one certainty is that Eli Manning is the leader that the Giants have relied on. Now, they need him to continue leading, he will, adding to his legendary story. He will ride into that sunset someday, but only on his terms, and this season isn’t it. 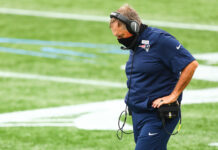 Does Bill Belichick Have Time to Rebuild the Patriots?