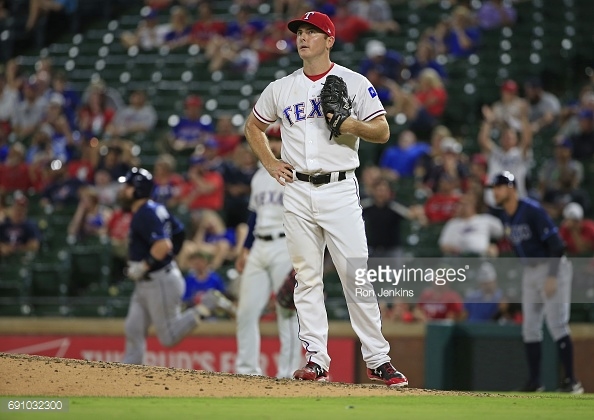 Last night, the Texas Rangers announced that they will be designating struggling former closer Sam Dyson for assignment. As a result, the club has informed other teams of it’s move and is looking to execute a trade. Dyson emerged as the closer in Texas last season with an excellent 2.43 ERA and 38 saves in  70 innings pitched. This season however, has been a much different story for Dyson as in only 16 innings Dyson has a gaudy 10.80 ERA.

The Rangers have drawn interest from more than one team on their struggling reliever. Here are three teams who may be a good fit for the right hander:

The back end of the Nationals bullpen is a disaster. They have been looking for another piece to throw in towards the end of games for quite sometime now. Washington currently has a bullpen ERA of 4.82 in 143 innings. Matt Albers and rookie Koda Glover have had some success recently, however a low risk move brining in Dyson might be smart for this struggling Nationals bullpen.

The Mets pitching staff from top-to-bottom has been a nightmare this season, The loss of both Jeurys Familia and Noah Syndergaard did not help the team’s cause at all. Addison Reed has since jumped into the closers role, where he has struggled thus far. The Mets bullpen currently has an ERA of 4.60. Not to mention, the bullpen has already thrown a combined 191 innings, and it is only June. At this point, it couldn’t hurt for the Mets to take a chance on a guy like Dyson.

The bullpen staff has a mark of 5.33, which is all the way at the bottom of the league. The Twins bullpen is absolutely atrocious at the moment. At this point, anything they could get out of Dyson would be an upgrade. With the club currently still contending, acquiring an arm to upgrade that bullpen would be in their best interest.