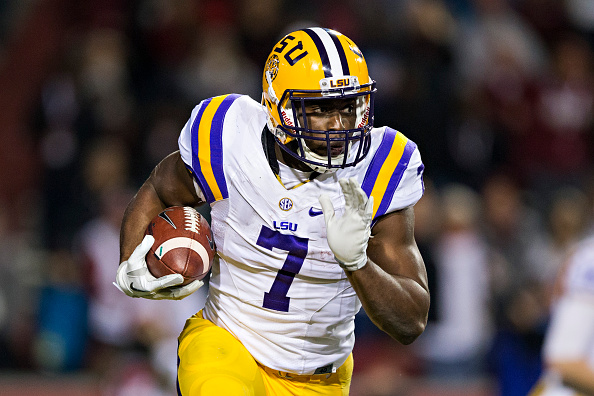 The NFL Combine has passed, and the 2017 NFL Draft is approaching very quickly. This running back class is very deep and very talented. Here are the top back’s in this year’s NFL Draft.

Humphrey produced at a very high level last season. He is a patient runner but pounds a whole when he sees it. He also has the speed to beat defenders to the edge. His size will be the only major concern. Last season he averaged 6.1 yards per carry for 2,133 yards and 17 touchdowns. He became the all-time leading rusher in NCAA history.

Mack is a sleeper in this draft. He ran very well at South Florida last season. He is an explosive back, and plays very fast. He can run circles around you, or slither out of your tackle. He certainly has blazing breakaway speed. Last season he averaged 7 yards per carry for 1,187 yards and 15 touchdowns.

Mixon is an electric runner, he runs with great power and speed. He certainly has three down back, starting potential. However, some teams have ruled him out due to an off the field incident in which he punched a woman. However, if teams are willing to take a flier it will be worth it. On the field, he averaged 7 yards per carry for 1,183 yards and 8 touchdowns. He also showed ability out of the backfield as he caught 32 passes for 449 yards and 5 touchdowns.

Hunt is a smaller back, however he has some tremendous ability for his size. He has some great speed and hands. Kareem could make for an excellent receiving back. He has excellent elusiveness and makes defenders miss. Last season he averaged 5.6 yards per carry with 1,475 yards and 10 touchdowns. He caught 41 catches out of the backfield for 403 yards and a touchdown.

At 5’9”, McNichols doesn’t have great size. However, that doesn’t stop him from being a tough runner. He relies on his excellent vision and trusts his offensive line. He does have excellent hands and superb route running. Last season with Boise State, he averaged 5.4 yards per carry with 1,709 yards and 23 touchdowns. He caught 37 passes for 474 yards and 4 touchdowns. He could likely be used as a passing back in the NFL.

Foreman was one of the most productive runners in the nation last season. He is a big back and can run defenders over with ease. However, his size doesn’t stop him from being quick and agile. He is mostly a straight north-south runner. He averaged 6.3 yards on the ground last season and went for 2,028 yards and 15 touchdowns.

Kamara is very similar to fellow Tennessee alum Jamal Charles as a runner. He is extremely quick but also has some power behind him. He also has great hands and is an excellent route runner. He could be used as a third down back as he is an excellent blocker. Last season he averaged 5.8 yards per carry and had 596 yards and nine touchdowns. He caught 40 passes for 392 yards and four touchdowns.

McCaffrey is an outstanding running back. He has the ability to do just about anything an offensive coordinator asks of him. He has great hands out of the backfield and tremendous vision as a runner. Last season he averaged 6.3 yards per carry and had 1,603 yards and 13 touchdowns. Receiving, he had 37 receptions for 310 yards and 3 touchdowns. He also had a phenomenal outing at the combine which should raise his stock.

Cook has shown plenty of upside as a runner. He is a big back who has excellent vision and patience. He also has great hands and is an excellent route runner. Last season he averaged 6 yards per carry and had 1,765 yards and 19 touchdowns. He also caught 33 passes for 488 yards. Cook’s only issue is that he has struggles with ball security at times.

Fournette is a powerful downhill runner who can run a defender over or run circles around them. Despite missing six games due to injury, Fournette averaged 6.5 yards per carry and had 843 yards and 8 touchdowns. He is regarded as one of the best prospects in the draft.