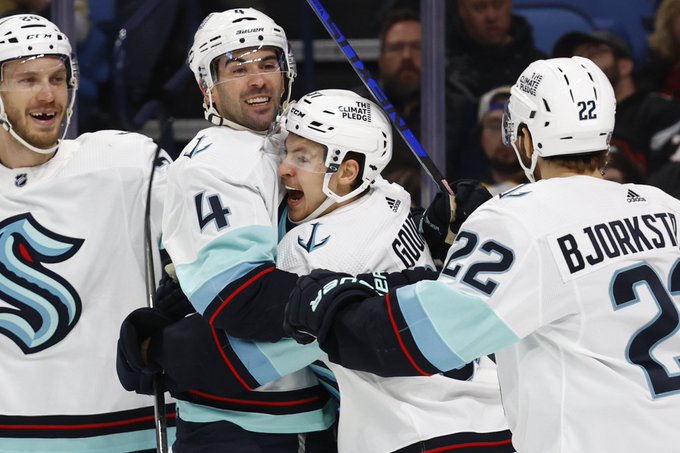 This year marks the second year of existence for the Seattle Kraken. The NHL’s youngest franchise started off with high hopes, largely based on the success of the Vegas Golden Knights who went to the Stanley Cup Finals in their first year. The expectations of the Kraken in the prior year were largely based on, “Well if Vegas can do it, so can we.”

However, expectations didn’t meet reality for the Kraken last year. The team finished in last place in the Pacific Division with 60 points and the vision for their expansion roster didn’t unfold the way they had hoped. Their defensive first approach in the expansion draft left them with little offensive firepower and put a lot of pressure on goaltending that didn’t transpire throughout the year.

The Seattle Kraken are Playoff Contenders

Fast forward now to the current NHL season and the Kraken now has the third-highest goals scored per game as key offensive acquisitions have panned out this time around.

At the time of this writing, the Kraken is currently on an eight-game win streak, highlighted by a 3-0 shutout win against the Boston Bruins at TD Garden. They sit in second place in the Pacific Division and look to be trending toward their first playoff appearance in franchise history.

Is this team for real, though? And what has led to this remarkable turnaround that has Seattle emerging as a hockey city? Here are three reasons why the Kraken should be viewed as a legitimate contender for the Stanley Cup Playoffs.

The Seattle Kraken was one of the worst offensive teams in the league last season. The team had approached the expansion draft with a defensive mindset with left the organization with few offensive weapons in their first year.

During this past offseason, the organization knew that had to change. One of the biggest acquisitions was that of forward Andre Burakovsky. After spending the last three years with the Colorado Avalanche, Burakovky signed with the Kraken last year as a free agent.

So far this year Burakovsky has given the Kraken the offensive boost they needed. Through 42 games played he leads the team with 36 points, including 12 goals and 24 assists.

The emergence of Matty Beniers

Last season, Matty Beniers played 10 games for the Kraken after finishing up at the University of Michigan. During that stretch of games, the young center logged three goals and six assists for a total of nine points. The impressive points per game clip that Beniers registered had many in Seattle optimistic about what he could accomplish during his rookie season.

Thus far in the 2022-23 campaign, Matty Beniers hasn’t disappointed. The 20-year-old has scored 17 goals and 19 assists through 42 games this season for a total of 36 points, tied with Andre Burakovsky for the team lead. The impressive start for Beniers has him firmly in the pole position of the Calder Trophy race.

After last year, it became clear that the Kraken didn’t have the depth in the top six forwards to be much of an offensive threat, and their lack of scoring ability was the biggest reason they were at the bottom of the Pacific Division. Beniers has helped provide that depth, particularly at the all-important center position. His play has given fans in Seattle a reason to be optimistic, not just about this season, but about the organization’s future.

Improvement of the Team’s Offense

Perhaps no team in the NHL has improved more year over year on the offensive side of the ice than the Seattle Kraken. Last season, the Kraken averaged 2.60 goals scored a game, good for 28th in the league. This year their 3.76 goals a game is the third-highest mark in the NHL.

Having more depth at the forward position has also helped out some of the players that were on the roster last year. Right Wing Jordan Eberle had 44 points for the Kraken last year in 79 games played. This season he has 35 points in 42 games played at a 68-point pace. Similarly, Left Wing Jared McCann scored 27 goals in 74 games and has 22 through 39 games played this year.

These are some of the main reasons the Seattle Kraken are well-positioned to make the postseason this year. The team has gone from an interesting expansion story to now a legitimate postseason threat in the span of only a year.