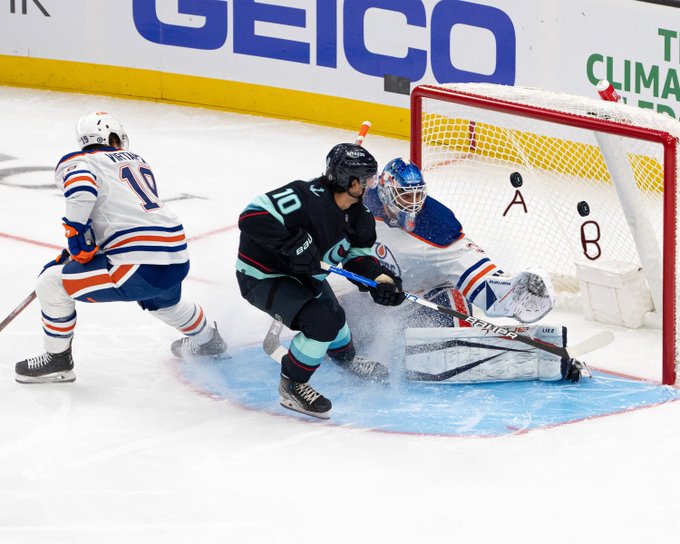 The NHL recently had its holiday break in which the league gives players a few days off around Christmas to spend time with their families. It provides a natural break at the one-third mark of the season and a chance to evaluate what happened so far in the league. At this point in the season, many of the early season surprises can definitively be called trends and a good indicator of what we can expect from the rest of the season.

At the beginning of the season, I believed were three favorites for the Calder Trophy, awarded annually to the top rookie in the NHL. A couple of these players have lived up to their early season hype and are likely to be in the Calder conversation for the rest of the year. Another one won’t be but will still good be a successful NHL player down the road.

One-third of the way through the season let’s see how these players have performed.

As a defenseman, the metrics used to evaluate Owen Power’s success are different from what fans might expect to see when evaluating and comparing a player. Through 30 games this year, Power has zero goals and 12 assists. However, his 23:32 Time on Ice per game is second on the Buffalo Sabres.

Going into the year, Power was expected to be one of the top four defensemen in the league and he has so far delivered on that hype. He’s trusted with playing big minutes and contributing on special teams.

While Power entered the year as the favorite to win the trophy, a third of the way into the season that title belongs to the next player on this list.

A third of the way into the season, Matty Beniers has registered 11 goals and 14 assists for the Seattle Kraken. His 25 points are good for third on the team after 33 games, Calder Trophy-type of numbers.

Heading into this season’s offense, and particularly playing at the center position, was a huge weak spot for the Kraken. The second-year franchise used a lot of its picks in the expansion draft to create a defensive first team which left little talent within the top six forwards.

Find the biscuit #2! Here’s Matty Beniers’ goal in the preseason against Edmonton, but is the original puck option A or option B?

Insert Matty Beniers. The rookie has provided that offensive spark and given the team a legitimate future start at center. Something the team desperately needed if the playoffs are going to be in their near future.

For the Kraken, the excitement hasn’t just been about Matty Beniers, but the team itself. One-third of the way into the season they have become one of the biggest surprises in the league with 40 points through 33 games. This point total is enough to keep within the top three in the Pacific Division and in the playoff hunt.

The combination of individual and team success makes Matty Beniers the front-runner to take home the Calder Trophy a third of the way into the season.

Heading into the year, it didn’t seem like Rossi would be able to log the minutes needed to win the Calder Trophy. The top six forwards for the Wild were well established and to make enough of an impact on the third line would be difficult. As this season has gone on Rossi has only registered one assist in sixteen games played this season. During those 16 games, Rossi has only played 12:26 minutes a game.