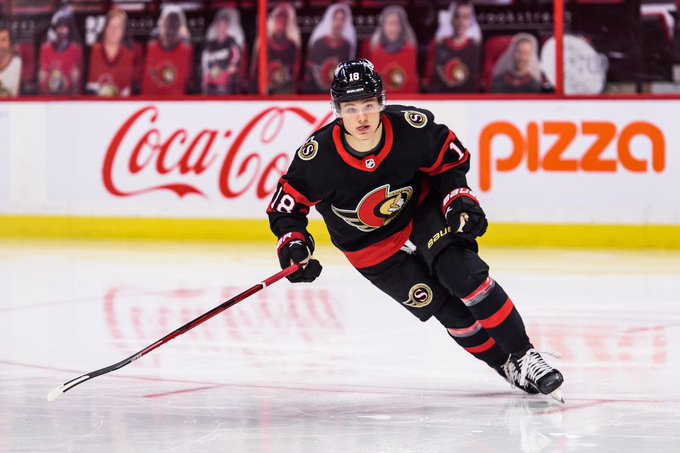 One of the most intriguing things about the NHL is that there are always young, exciting players arriving on the scene. Since most young players entering the league will not reach their prime for a few years, fans can spend a lot of time making predictions about a player’s future potential and debating about which players will have the best career.

I don’t claim to know how players will turn out in the future, but here are who I consider the top three forwards under 21 playing in the NHL today.

The centre-piece of Detroit’s rebuild, this is Lucas Raymond’s second year as the Red Wing’s first-line left winger. Since he broke into the league, Raymond is second on his team in goals, points, and even-strength points, behind only the team’s captain, Dylan Larkin. On a team filled with young talent, Raymond stands out among his peers, showing flashes of hockey brilliance on a regular basis.

Unfortunately, because of the current state of the rebuild in Detroit, Raymond’s counting stats do not seem necessarily high. However, he is third in career points per game and goals per game among all NHL players who are currently under the age of 21. Raymond is going to continue to grow and develop along with the rest of his team and should be a star in the league for many years to come.

A product of the University of Michigan, 20-year-old Matty Beniers is currently in his first full season in the NHL (though he put up 9 points in 10 games for the Kraken in the 2021-22 season). Forced into the number-one centre role in Seattle this season, Beniers has thrived putting up 17 goals and 39 points in 48 games. Among all players currently under 21, Beniers is second in both goals per game and points per game this season.

He’s been solid at both ends of the ice; his line with Jared McCann and Jordan Eberle has an Expected Goals% of 55.5%. He has also shown a lot of patience for a player his age, only taking one minor penalty so far this season. Beniers is also currently first amongst all rookies in points, goals, even-strength goals, and game-winning goals, making him the current favourite to win the 2023 Calder Trophy.

Drafted third overall by the Ottawa Senators in the 2020 draft, Tim Stützle entered the league right away as an 18-year-old. Though his rookie season seems somewhat underwhelming (12 goals and 29 points in 53 games), he was playing for an Ottawa team who was second last in a weak North Division. After a move back to his natural position of centre, Stützle’s numbers improved marginally in his sophomore season. This year, centring the Senator’s top line, Stützle has produced at more than a point-per-game pace (18 goals and 39 points in 35 games).

Along with leading all NHL players under 21 in goals per game (0.514) and points per game (1.11), he also leads his team in both of those stats. His line with Brady Tkachuk and Claude Giroux leads the entire NHL in expected goals for per 60 for lines who have played at least 200 minutes, and their expected goals% is third in the league. Stützle is also the youngest Senator in team history to reach 50 goals for the team. Considering the talent that Ottawa is building around Stützle, it is not hard to imagine him turning into the superstar they envisioned him becoming when he was drafted.