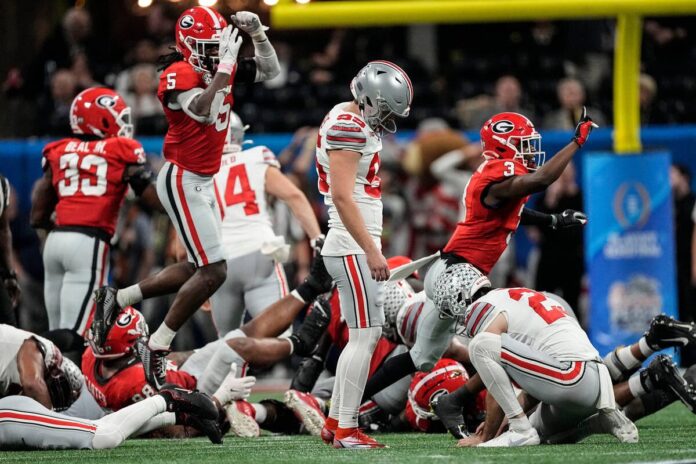 The kick went left as the ball went down; along with every Ohio State Buckeye fan’s hopes of what could’ve been a redeeming moment to a now forgettable season. Noah Ruggles hooked what would’ve been the game-winning field, which would’ve sent the scarlet and gray on its way to compete for a national championship.

Alas, it will be the Dawgs from Georgia on their way to Los Angeles to try and defend their title. Hollywood loves a sequel, and almost got one too, if not for those meddling kids, and their horned frog too. TCU will play the role of David against the University of Goliath Bulldogs.

I had the privilege of watching this game through a window at an outdoor South Florida New Years’ party. It’s pretty disorienting to endure a devastating loss while everyone behind me shouted “Happy New Years!”, and popping champagne. It was like they were all Titanic passengers celebrating a bingo victory right as our ship made contact with the iceberg.

How could these South Floridians be so clueless? Do they not understand that Ohio State just went 0 for 3 in their pre-season goals (beat Michigan, win the Big Ten, win the National Championship)? Could they not fathom that this was the first time Ohio State has lost back-to-back games since 2014? In fact, because of the swiftness of the Ruggles’ shank, we made it just under the gun to have back-to-back losses in the same calendar year for the first time since that dreaded 2011 season.

After the ball and black and red confetti fell, my phone started blowing up like it was in a Michael Bay movie. My iPhone was practically schizophrenic as for every celebratory 2023 text was a mournful condolence to laying the Ohio State 2022 season to rest. It was as if I was getting invited to multiple birthday party-funeral doubleheaders.

1. “Woof!” –My sister, an alumnus of the University of Michigan.

This text hit my phone just as the arms were waving the kick no good. Leave it to my Wolverine sister to pounce as soon as any hope or feeling left my body. Speed kills, as they say.

Some context would be that after the TCU Horned Frogs beat her Wolverines, knocking her team out of the playoffs in a truly great game, I texted her “Ribbit!” After the Dawgs beat my Bucks, the comeback wrote itself. Touché, sister. Touché.

2. “S***”–My soon-to-be Mother-In-Law, who happens to be giving me room and board after this New Year’s party

The STB MIL (soon-to-be mother-in-law) has, amazingly, adopted my alma mater as her college football team. She watched the whole game and had to miss the two Andy’s not be allowed to get drunk on CNN. In her house, this is the utmost sacrifice for her STB SIL (soon-to-be son-in-law). When that kick went wide, she only had so much to say after her evening was wasted.

A three-act play on how this season has felt. The group chat had a lot to say about how disappointing of a season this was, how confidence in Ryan Day is wavering, and how lucky we were to be in school when Ohio State football reached the mountaintop. It’s one minute past midnight — a brand spanking new year — but we’re trying to live in the past for just a little bit longer.