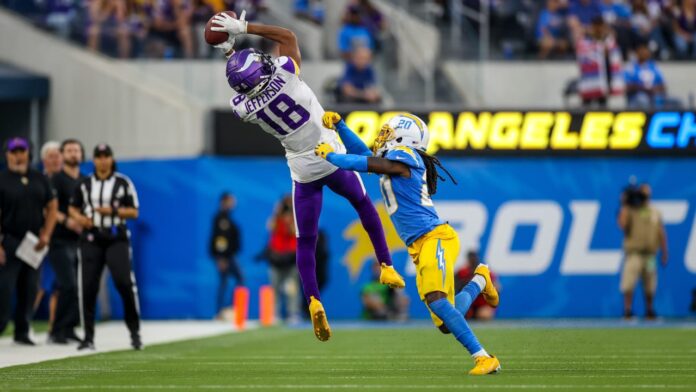 The black and blue division of the National Football League has always been the NFC North. For decades, it seemed that whoever had the most powerful bulls in the backfield would rise to the top of the heap – through both aggression and ambition.

In 2022, however, the NFC North has recently gone from a battle of wills to a battle of skills. Talented young receivers on every team are providing the type of blazing speed that’s normally reserved for rockets and missiles. When the football goes sailing along the horizon, you can bet on some phenomenal fireworks from this group.

Because of this, the ‘ground-and-pound’ tradition of the NFC North has been replaced with dynamic dives and perplexing pass plays. In a division once known for run-first offensive and standard formations, the high wire act has taken over, thanks to these four men.

Once known for its bruising backs, the NFC North is now an air show, thanks to a talented group of receivers

We’re breaking the rules right out of the gate here, nominating three youngsters for one spot. But so far, it’s been tough to analyze which one will break out of this bunch.

It’s possible that the trio of Christian Watson, Romeo Doubs, and Samori Tore all peak together and form like Voltron. After all, it’s happened before.

Much like the Washington Redskins’ ‘Posse‘ back in the 1980s, this group was blessed with three fantastic pass catchers who shared the duty and confounded defenses. Comprised of Gary Clark, Art Monk, and Ricky Sanders, all three of those legends surpassed the 1,000-yard mark in 1989. In a run-first era of the NFL, that seemed unheard of at the time.

But the game has changed. It’s become an aerial dogfight, and these three Packers receivers have the potential to put up big numbers TOGETHER.

Out of the Pack’s bunch, it looks like Christian Watson can be a star in the NFL. He’s fast and versatile. Not only a great receiver, he’s also multi-talented and can be involved in a lot of gadget plays. For example, he’s already scored a rushing touchdown on an end-around trick play. The Green Bay coaching staff has even commented that they need to get the potential Pro Bowler the ball more because he makes things happen with his creativity and athleticism.

The Packers entered the draft knowing they needed to draft help for their receiving room and did so in the second, fourth, and seventh rounds. Along with Watson came Romeo Doubs and Samori Tore.

Doubs is a University of Nevada product that didn’t project as a starter at the NFL combine. However, he’s proven the so-called experts wrong, already providing big plays with his ability to go vertical in a hurry. When he steps on the gas? 40 yards is conquered in the blink of an eye. He may never be a number-one wide receiver on any team, but he’s a valuable weapon that was basically gifted to the Pack. They will surely take advantage of that.

And don’t sleep on Samori Toure, who for some reason, was a seventh-round pick and yet another gift to Green Bay. He fits well as a potential slot receiver in this group. As a late-round pick, he’s being developed slowly but steadily. Having said that, he’s also already notched a 37-yard touchdown and seems willing to fight for extra yards. He might be the guy who does a lot of the dirty work., making the tough catches in the slot for first downs and goal-line situations.

When Aaron Rodgers took over as the Packers quarterback in 2008, he had a comfort level knowing he had a great group of wide receivers players like Greg Jennings, Donald Driver, and James Jones. Now at 38, he may have one more ‘supergroup’ of stars developing quickly.

So the window hasn’t closed yet. There may be an opportunity for the venerable quarterback to grab another Super Bowl ring, provided his young stars come out to shine.

Coming off a 1,000-yard season in 2021, it looked like this would be a breakout year. In just his third season in the league, he was poised to go over that same mark again, until he was placed on injured reserve. He’s out for the season due to a severe ankle injury.

So, we’ll have to wait until next season to see how well he continues to gel with quarterback Justin Fields. If he gets the chance to finish next season injury-free, we should see a huge jump in his production.

The Lions gave been in rebuilding mode seemingly forever, but the team is making a slow progression forward under Head Coach Dan Campbell. One of the largest and most deadly pieces of the Detroit puzzle is Amon-Ra St. Brown.

St. Brown, 23, was a steal in the fourth round of the 2021 NFL Draft. He’s already playing like a top pick and leading the Lions in their quest to make the playoffs for the first time since 2016. He’s become Jared Goff’s favorite target and the type of playmaker that the Motor City hasn’t witnessed since the days of Calvin Johnson.

While the Lions (5-7) may not make the postseason in 2023, they are lining up for a bright future. Second-year Head Coach Dan Campbell has instilled a winning mentality. The team has a boatload of draft picks in the next couple years. In the meantime, they have an offensive cornerstone like Amon-Ra St. Brown to build around.

The incredibly talented Mr. Jefferson has taken the NFL by storm, becoming an unstoppable force amongst the Vikings’ many offensive weapons. No wide receiver has ever won the NFL MVP Award. Jefferson’s eye-popping statistics and highlight reel receptions may have him poised to be the first receiver ever to take home the trophy.

He’s one of the elite pass-catchers in the game today. Defensive backs all around the NFL not only respect him…They fear him.

That’s because, even at such a young age, he may be the best playmaker in all of pro football. Combining electric moves with blazing speed, he also possesses great body control and hardly ever drops a pass.

He’s a human highlight reel and the ultimate weapon on a team that fits him well. He doesn’t always have to be the answer when it comes to making big play. Having that wide-open offense, filled with other offensive stars, has freed up Jefferson, who is making his claim as the best wide receiver in the entire NFL.

That’s why Justin Jefferson is very deserving of all those MVP mentions. Because he’s a huge reason why the Vikings (10-2) have dominated the NFC North, and could advance all the way to Super Bowl LVII.