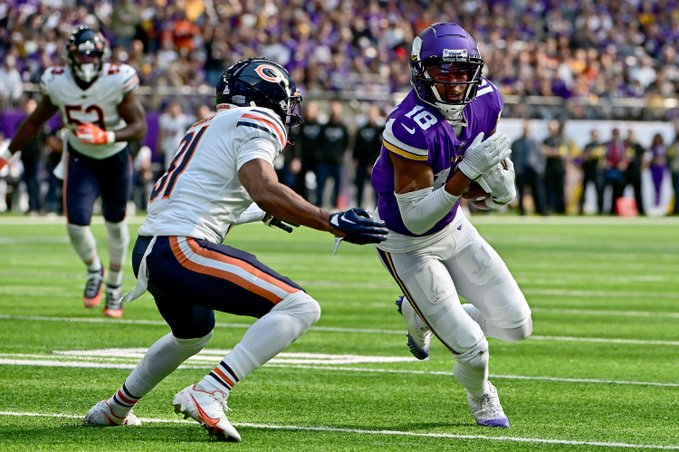 After dispatching the Chicago Bears on Sunday, the Minnesota Vikings now sit atop the NFC North at 4-1 overall. First-year Head Coach Kevin O’Connell had the team’s offense clicking in what turned out to be a hard-fought victory.

The win was symbolic of what O’Connell has brought to the table since being tabbed for the Vikings job after serving as the offensive coordinator of the Super Bowl Champion Los Angeles Rams last season. The former NFL Quarterback is displaying the same playmaking prowess with the Purple and Gold.

Even though the squad sputtered a bit in the second half, the Vikings displayed the kind of firepower that gives their fan base hope for a division title and a serious postseason run. From what they’ve shown thus far, their point production might be enough to get them there.

The Minnesota Vikings currently rank 10th in the NFL in total offense and are averaging 23.0 points per game. However, there were signs this week that they may be climbing those charts with a bullet.

Kirk Cousins started Sunday’s game going 17-for-17, breaking the Minnesota Vikings franchise record. The veteran quarterback was nearly flawless and would finish the day by going 32 for 41 for 296 yards. His one-yard run in the fourth quarter is what sealed the win for Minnesota. The longtime signal-caller is firing on all cylinders right now, and he’s got plenty of weapons around him.

The 2022 Minnesota Vikings are loaded in terms of playmakers

It’s not just O’Connell’s brain and Cousins’ arm that have gotten the Vikes this far. In a city that has been known for its blue-collar work ethic and the hard-hitting Purple People Eaters, there’s a lot more finesse in the Gopher State than you might have imagined.

Adam Thielen represents the Land of 1,000 Lakes in every conceivable way. He was born there, attended Minnesota State University, and has spent his entire career with the Vikings. Although he went undrafted in 2013, his workhorse attitude has made him one of the most reliable pass-catchers in the league for nearly a decade.

A Pro Bowler in 2017 and 2018, Thielen has transitioned from big play receiver to more of a third-down pass catcher and clutch performer. The 32-year-old veteran has embraced the role, chipping in with 25 catches, 248 yards, and one touchdown through the first five games of 2022.

Across from Thielen is one of the most dynamic playmakers in the NFL. Justin Jefferson gives Minnesota the home run threat that all great teams must have. On Sunday, the third-year star put on a show. He burned Chicago for a career-high 12 receptions on Sunday. That was good for 154 yards, as he and Cousins set the pace right out of the gate.

With 547 yards through five games, Jefferson is once again on a superhuman pace in 2022. But numbers don’t tell the complete story regarding the former first-round pick. Down the stretch, he’ll draw a lot of double teams. That should leave things wide open for some of his partners in point-scoring.

A sometimes overlooked running back, Dalvin Cook may not have the same ‘superstar name value’ as some of his NFL cohorts. Perhaps that’s because he doesn’t play in a major media market. Regardless, he’s as good as anyone in the league. He’s the Vikings’ go-to guy on first down, as he routinely sets the squad up with second-and-short situations.

A nifty runner who can skip past you or just lower his shoulder and power forward, the Florida State product is about as reliable as it gets. Since being chosen as the franchise’s second-round pick in 2017, he’s already racked up over 5,000 yards and 40 touchdowns on the year. His steady productivity and penchant for busting a big play from time to time make him a valuable piece of the Purple puzzle.

Often known as the ‘poor, sick Cousins’ of the NFL, the former Michigan State quarterback has weathered the storm throughout his career. Whether it’s been a change in environment or multiple changes in offensive coordinators, the Minnesota Vikings signal caller ranks among the best of all time in passing accuracy.

That pinpoint passing was on display this weekend, as the venerable veteran led the team to three touchdown drives in the first half. If he plays anything close to the way he did on Sunday against Chicago down the stretch, Minnesota could find themselves in the Super Bowl. We’ve never really seen the best of Kirk Cousins, due to a lot of circumstances beyond his control. 2022 might be the season that he finally puts it all together.

“A play-calling clinic,” is how FOX announcer Mark Schlereth described the work of Kevin O’Connell during Sunday’s game against the Bears.

Schlereth wasn’t far off, at least in the first half. The man under the headset had Chicago guessing for the first two quarters, pulling out everything but the kitchen sink.

A great example of this was a trick play where Justin Jefferson tossed Dalvin Cook a cross-field throwback pass in the second quarter. The play call came on third-and-long. It ended with a first-and-goal that set up the Vikes’ third TD of the game.

While O’Connell will no doubt have some growing pains in his first year as the Minnesota Vikings Head Coach, he’s already proven his prowess when it comes to play-calling. He must put four solid quarters together and stay consistent, something the team didn’t do on Sunday.

The Vikings have shown us flashes of brilliance so far. If the talented new leader can pull it all together, he may find himself standing on another set of Super Bowl sidelines again.