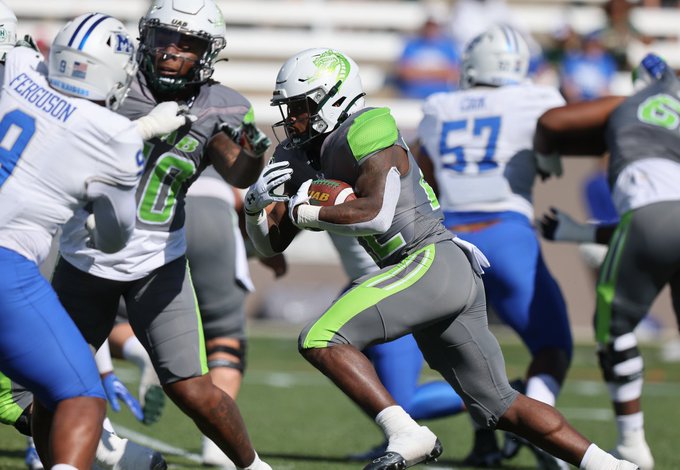 It’s the most wonderful time of the year! That’s right, our conference-by-conference look at the postseason is back! This year, we have 82 bowl-eligible teams playing in 41 bowl games and one CFP National Championship. 15 bowls feature first-ever matchups! And, amazingly enough, only one bowl in the entire schedule pits two conference champions against one another. Without further ado, let’s look at the 2022 Conference USA Bowls!

After winning nine games last year, UAB took a step back after coach Bill Clark stepped down. Still, at 6-6, the Blazers are bowl-eligible for the seventh straight year. Just as their opponent did, UAB split its non-conference as well as in-conference slates. This team is a bit better than the record indicates. Five of their six losses were by seven or fewer points; none of their wins were as close. The Bazers will kick off the 2022 Conference USA bowls schedule against Miami (OH) out of the MAC.

The nation’s leading rusher calls UAB home. DeWayne McBride has been running wild all year long and has earned 1,713 yards and 19 touchdowns (second-most in FBS). In the 11 games he appeared in, McBride was held under 120 yards just once (against LSU). That’s an average of 155.7 yards per game. He was held out of the endzone just once.

Senior linebacker Noah Wilder has been doing his thing for four years now and leads the way on this Blazers defense yet again with 102 tackles (by a sizable margin). He hasn’t been able to replicate the success of his sophomore campaign, unfortunately, but he’s still a force.

The Miami (OH) Redhawks allow just 135 yards per game on the ground whereas UAB has been able to do whatever they want to the tune of 243 per. Something has to give and it’s going to be the Redhawks. UAB is a more talented team than they let on and should be able to take care of business here.

MEEP. MEEP. For the second consecutive year, the University of Texas at San Antonio Roadrunners are the Conference USA champions. Last year, they finished with 12 wins, and with a win over Sun Belt Champions Troy here, they could cap off the most successful two years in program history. As this is the final year in C-USA before they make the move to the American Athletic Conference in 2024, UTSA goes out on top. Fun fact, this is the ONLY bowl game to pit two conference champions against one another. What a matchup for the first day of bowl season!

The high-flying offense is led by a handful of studs. Quarterback Frank Harris continued his onslaught with 3,865 passing yards and 31 touchdowns as well as 588 yards and eight touchdowns on the ground. He was fantastic last year and stepped up to another level this year. Once again, his favorite targets were Joshua Cephus and Zakhari Franklin. Cephus led the way with 87 receptions and added 985 yards and six touchdowns. Franklin tallied 86 receptions for the team’s best 1,100 yards and 14 touchdowns.

Defensively, the Roadrunners have a pair of senior defensive backs who make it hard to move the ball in Clifford Chattman and Corey Mayfield, Jr. Chattman transferred in from Texas A&M before the 2021 season and made his presence known this year, logging 13 pass breakups and four interceptions. Mayfield also added 13 pass breakups to go with three interceptions and even a few tackles for loss. In the front seven, it’s all sophomore linebacker, Trey Moore, and his 52 tackles, 13.5 TFLs, and six sacks.

This is a fantastic matchup. 11-2 UTSA, Champions of Conference USA, against 11-2 Troy, Champions of the Sun Belt. Two very, very talented teams are matched up in a bowl that casuals will just scroll by. If you claim to love college football and willingly elect to miss this game, I don’t know what to tell you. The Roadrunners’ offense is fantastic. The Trojans’ defense is stout. UTSA wins this one ever so narrowly and rides off into the American Athletic Conference in 2023.

The surprise of the 2022 Conference USA bowls is the inclusion of 5-7 Rice. The Owls got the nod over the 6-6 Appalachian State team from the Sun Belt. Rice finished with just four wins over FBS teams; one of which was against a bowl-bound team.

This offense, which was 86th in the nation with just 25.3 points per game, goes as quarterback TJ Mcmahon. He threw for 2,102 yards and 18 touchdowns but he missed time at the end of the year due to injury. Regardless of the quarterback in this one, both Luke McCaffrey (yes, that McCaffrey) and Brad Rozner have shown an ability to make plays.

Defensively, Rice struggled. The Owls finished as the 120th-ranked scoring defense and don’t have any individual player with more than 8.5 TFLs. Southern Miss isn’t the best team out there, but the Eagles have Frank Gore Jr and that’s enough in this one.

The North Texas Mean Green finished 2022 7-6 with a loss to UTSA (for the second time this year) in the C-USA Championship. Of the four non-conference games, North Texas managed to lose to the three FBS teams they faced. They went 6-2 in conference to earn that title game berth but ran into UTSA who took them down for the second time. UNT looks to snap a five-bowl game losing streak this year against Boise State. However, North Texas decided to fire head coach Seth Littrell on December 4th despite leading the team to the C-USA Championship and this bowl game.

He’s been improving in each of the past three years and quarterback Austin Aune took a massive step forward in 2022. Aune shattered all of his previous bests, passing for 3,309 yards and 32 touchdowns. No game was bigger than his 414-yard, five-touchdown performance in the win over FIU. Roderic Burns led the way with 37 receptions but Jyaire Shorter turned just 22 receptions into 598 yards and 10 touchdowns. Watch out for him, he can turn any of his few chances into points.

On the defensive side of the ball, sophomore Mazin Richards is a force. He recorded the team’s most TFLs and sacks with 12.5 and 7.5, respectively. Three of those sacks came in the win over Louisiana Tech and he’s recorded four TFLs over the last three games. Meanwhile, the leader of this defense is senior KD Davis, and his 135 tackles on the year, best in C-USA (fourth in FBS), backing up his 120 tackles in 2021 which also led the conference.

Boise State has been the poster child for Group of 5 success over the past two decades. However, gone are the days of 11 and 12 wins seasons but they’re still good. The Mean Green may be mean and green, but the Broncos will win this day.

For the second year in a row, Western Kentucky played 13 regular season games and was atop the nation in passing offense. On the year, the Hilltoppers went 3-3 out of conference, dropping games to bottom-of-the-barrel P5 teams like Indiana and Auburn.

Once again, WKU went to the Transfer Portal to find a quarterback and found themselves Austin Reed from the University of West Florida (D-II). While at UWF, Reed won a national title in 2019 and finished two years of football (no D-II football in 2020) with a 22-3 record, 7,507 yards, and 78 touchdowns. All he did when jumping TWO levels of football is finish with 4,249 yards and 36 touchdowns as a Hilltopper. With 3,304 yards and 31 touchdowns leaving the program via graduation and the Portal, someone had to step up. That player was Malachi Corely and his 1,181 yards and nine touchdowns off of 90 receptions.

Austin Reed elected to jump back into the Transfer Portal before this game.

Leading the way on the defensive front seven is linebacker Jaques Evans. He accounted for 100 tackles, 11 TFLs, and 7.5 sacks. On the year, Evans recovered a pair of fumbles which includes a scoop and score in the win over Rice. Oregon transfer, Kahlef Hailassie, continued his dominant play yet again in 2022. He finished the year with 10 pass breakups to go with two interceptions, eight TFLs, and three sacks. Overall, the defense has been pretty solid for WKU, save for a couple of 40-point efforts. They force 2.3 turnovers per game, good to be tied for second-best in the nation.

This is a very impressive Hilltoppers team. All in all, WKU would likely beat most G5 teams and even a good handful of P5. But not here. USA is a much better team than their 10-2 record may suggest (which is saying something). They were four points away from an undefeated season and will add to the win total in this one.

After yet another seven-win season, the Middle Tennessee State Blue Raiders wrap up the 2022 Conference USA bowls, They were the first casualty in James Madison’s surprising first year at the FBS level, but then upset Miami (FL) at the Orange Bowl just three weeks later. They faltered a bit when C-USA play began as they lost four of their first five games. However, they rattled off three straight to finish the year.

In terms of efficiency, senior quarterback Chase Cunningham took a step back in 2022. He did set new career bests in yards and touchdowns with 2,920 and 19 (as compared to 1,318 and 16 in 2021), but he did that with 244 more attempts. Given, he ended up injured. His favorite target this year has been sophomore receiver, Jaylin Lane. Lane reeled in 59 passes for 829 yards and four touchdowns. Both players missed time this year with injuries but seem to be fully healthy again.

After racking up 16.5 TFLs and eight sacks last year, senior defensive lineman Jordan Ferguson logged another 16 TFLs and nine sacks. He’s been useful on special teams as well, running for 49 yards on a fake as well as returning a blocked punt for a touchdown. Another fun thing about this defense is that it forces turnovers. This couldn’t be more evident than with junior corner Decorian Patterson and his C-USA best six interceptions (and 12 pass breakups). That mark is also second-best in the nation.

This could very well be a defensive struggle. San Diego State’s offense is not good but their defense is stout with a good handful earning All-MWC honors. I’m leaning toward assuming that this will be a low-scoring affair with the Blue Raiders coming out on top.

This conference is going to look very different next year. After losing Marshall, Old Dominion, and Southern Miss to the Sun Belt before this year, C-USA will lose Charlotte, Florida Atlantic, North Texas, Rice, UTSA, and UAB to the American. They’ll gain Liberty and New Mexico State and will transition Jacksonville State and Sam Houston State to the FBS level. This is a conference scrambling to figure out who it is. With all of the crazy realignment happening, Conference USA will be one to watch.