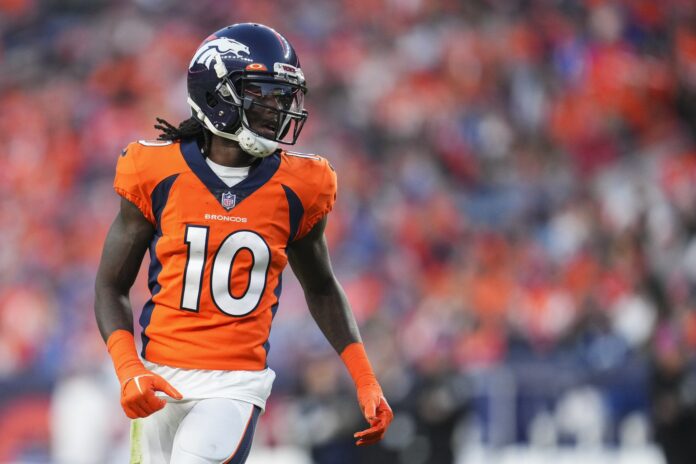 There have been many names tossed around ahead of the NFL Trade Deadline on Tuesday and most have been at the wide receiver position. We usually see many rumors this time of year but not much happens as we’d like. This season, there’s been a flurry of moves heading into the deadline, including notable names like Christian McCaffrey and Robert Quinn. Once again, the hot stove is cooking and hopes of even more moves to come in high.

Drafted by the Pittsburgh Steelers in the second round of the 2020 NFL Draft, Chase Claypool has put up solid numbers during his three-year career so far. He’s had two 800-yard receiving seasons while not starting for a full campaign yet. That’s about to change this year but could it be with another team? It was reported that Claypool has been drawing interest ahead of the NFL trade deadline. Despite being tied for second on the team in targets, he only has 266 yards on the season and a touchdown.

A big reason for that is that he’s sharing the field with loads of talent like Diontae Johnson, Pat Freiermuth, and rookie George Pickens. The quarterback situation this year doesn’t help either. That means Claypool could potentially be expandable ahead of Tuesday and teams know that. The Steelers still view the third-year wide receiver as a valuable asset to their team so they reportedly want nothing short of what the Carolina Panthers got for Christian McCaffrey. Claypool may end up staying in Pittsburgh but if a team decided to pull the trigger, it might be worth it.

D.J. Moore is one of the most interesting names to keep an eye on at the NFL trade deadline. Even though the Carolina Panthers have said to have no interest in dealing anymore of their top players, that didn’t stop teams from at least checking in. There’s been a carousel of quarterbacks the past few years in Carolina but yet Moore has been highly productive throughout.

In each of the last three seasons (not including this year of course), he’s tallied over 1,100 yards. So far in seven games this season, he’s only managed to gather 273 yards and two touchdowns but again, the play under center hasn’t helped one bit. There is no doubt that Moore would change the outlook of any contending team and that’s what the Panthers are hoping to keep on their team for the future so while it’s highly unlikely that he’s dealt, the rumors continue to stay heavy. Who knows, if the right deal comes around, the Panthers might be inclined to change their mind ahead of the NFL trade deadline.

One of the most interesting names on this list is third-year wide receiver Jerry Jeudy, who was drafted 15th overall out of Alabama by the Denver Broncos in 2020. The thought of pairing Jeudy with Courtland Sutton was a match made in heaven. He nearly went for 900 yards in 16 games during his rookie season. While he only gathered 467 yards in 2021, he only played in 10 games and only started five of them to do a high ankle sprain in week one that put him on IR. The Broncos traded for star quarterback Russell Wilson in the offseason and it was thought to be a Super Bowl-type move.

Everyone thought that would elevate this receiving core even more, especially with Jeudy in his third year. Well so far, things haven’t gone to plan. Wilson is having the worst year of his career and that has affected Jeudy. While he does have a solid 386 yards and two touchdowns through seven games, the lack of explosive plays isn’t ideal in an offense that as a whole is below average. Keeping one of Wilson’s top targets would be ideal but for a struggling team with a few receivers to spare, the Broncos could move him for the right package of picks.

Despite Brandin Cooks having six 1000-yard seasons, the Houston Texans are his fourth team in his nine-year career. He’s also coming off back-to-back 1000-yard seasons with a combined 12 touchdowns in that span. The veteran came into this season with quarterback David Mills under canter as they’re still looking for answers not only at that position but throughout the whole team. In six games this season, Cooks has caught 28 balls for 281 yards and a touchdown. With a thriving team that needs help at the wide receiver position, Cooks could be moved for early rounds picks that would help the Texans in this rebuild for the future.

It’s puzzling how a talented player like Cooks could be moved so many times but it’s a business and he’s brought future picks to teams that needed them. That could be the case here as well in Houston but the relationship between the two sides has been strong. If Cooks is moved, it will be his fourth time being traded, tying Eric Dickerson for most trades in a career. He signed a two-year extension worth just under $40M back in April so whoever trades for him will not only get a very talented receiver but will have control for the next two seasons.