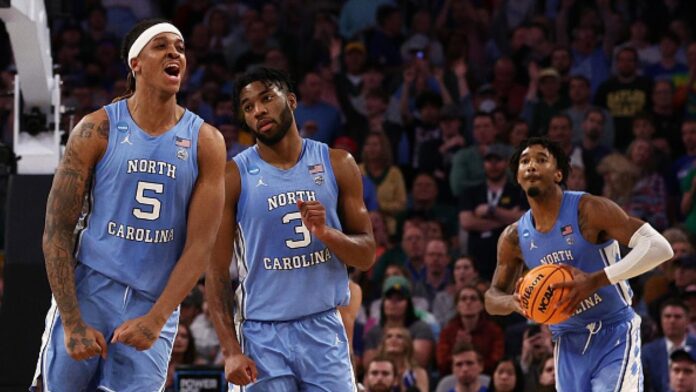 The race for the National Championship is set to begin in just a couple of weeks as the usual suspects headline the top of the odds list heading into the season. As we figured, Gonzaga claims the top spot once again followed by teams who are on the verge of finally getting over the hump. The 2022-23 campaign is just about as wide open as any in recent memory and Monday, November 7th will be the start of something special across the landscape of college basketball.

The first AP Poll of the season is here and @UNC_Basketball is at the top 🙌 pic.twitter.com/erC1PzzegX

Year after year, Gonzaga goes into the season with more hype than the last, despite regularly falling short of their goal of a National Championship. 2022-23 will be no different as they’re yet again the odds-on favorite to win it all. The Bulldogs not only lost in the Sweet 16 last season but also lost star center Chet Holmgren to the NBA Draft. They did get some great news as star forward Drew Timme decided to return to school for his fifth season.

Along with Timme and his 18.5 points per game, Gonzaga also brings back the firepower of Julian Strawther and Rasir Bolton to this team, who both averaged double-digit points last season. This trio alone makes the Bulldogs favorites to win the National Championship but they also added a 19.9 point per game transfer from UT-Chattanooga, Malachi Smith. Gonzaga once again has all the talent in the world coming into the season and they’re hoping that this is finally the year that they get the job done.

After appearing in the Elite Eight last season and the Final Four the year before that, the Cougars get the attention of everyone and find themselves right behind Gonzaga in the National Championship odds. They made last year’s run without having their two best players, Marcus Sasser and Tramon Mark, who come into this season healthy. That goes to show you the talent on display for Houston and that will be showcased yet again in 2022-23.

If having a plethora of talent last season throughout the team wasn’t enough, Houston added five-star recruit Jarace Walker to this highly skilled squad. Head coach Kelvin Sampson has the right recipe for success in this program with his tough and physical style of play that has the opportunity to carry them even further than it has the past two years.

We should be talking about North Carolina as defending champions heading into this season but instead, we’re talking about them as runner-ups to Kansas after blowing a commanding 15-point halftime lead and losing 72-69. It was heartbreaking for a team that made a great run with a loaded roster and a first-year head coach in Hubert Davis, who had to replace legendary head coach Roy Williams after 18 seasons with the team.

The Tar Heels have to turn the corner and forget about what happened at the end of last season as they have a real chance to make another deep run at the National Championship. They return Armando Bacot, who led the team in points and rebounds, along with three other key starters. There’s a reason North Carolina enters the season as the number one team in the nation and the determination to prove that is through the roof.

Along with North Carolina, Kentucky also begins the season with +900 odds to win the National Championship. The Wildcats had the worst loss of them all this past March, entering the NCAA Tournament as the two seed and getting upset by number 15 seed St. Peter’s 85-79. Despite that horrendous loss, they’re still among the favorites to win it all this season.

Defending National Player of the Year Oscar Tshiebwe returns to the team after averaging an impressive double-double last season with 17.4 points and 15.2 assists per game. They lost a few pieces but were able to plug the holes with talent on offense, defense, and depth-wise. With the talent possessed and John Calipari leading this team, they’re poised to overcome what happened last season in a big way.

Duke heads into this season without Mike Krzyzewski under the helm for the first time since the 1979-80 season. He came up just short last season but capped off an illustrious career with an ACC Regular Season Championship and a trip to the Final Four, where he ultimately fell to the rival Tar Heels. Moving forward, the Blue Devils will now be led by head coach Jon Scheyer.

Duke sprints into 2022-23 with yet another very talented team and a great outlook for the feature. They snagged the number one overall prospect in the country and future lottery pick Dereck Lively. The pairing of Lively and junior Jeremy Roach on the court will be a handful for any team to deal with and add on top of that the addition of five-star Dariq Whitehead, another potential lottery pick, who when he gets fully healthy from foot surgery will bring elite scoring to the table. This team is determined to fight for their first-year head coach and start the new era at Duke with a National Championship.