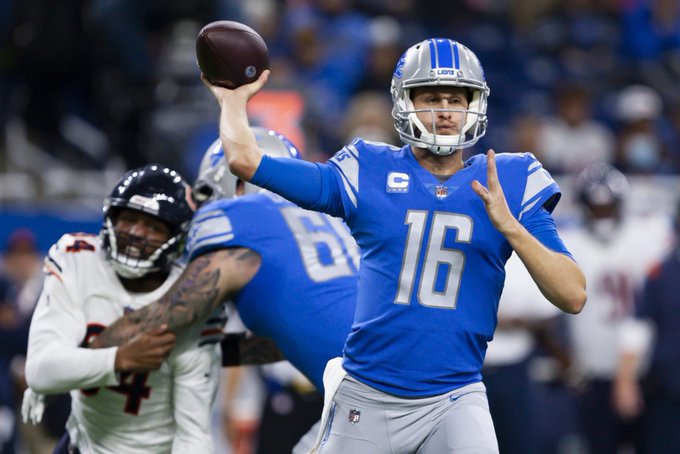 It seems like every season, the NFL experts pick a handful of teams they believe are set to go from pretenders to contenders. Are the Detroit Lions one of those teams in 2022?

Like some of the league’s other dark horses, the Lions appear poised to rise from the rubble and break through to playoff contention. Buoyed by the intensity of second-year Head Coach Dan Campbell, the Motor City is eyeing a possible postseason birth for the long-suffering franchise.

Some of those hopes began to arise when the team was featured as part of HBO’s critically acclaimed series, Hard Knocks. The up-close look at the way Campbell and company conduct their business, along with a bevy of young talent, had Detroit entering the season with a new attitude. However, it’s been a learning process.

Despite Showing Some Early Flashes of Brilliance, the Detroit Lions Still Need to Make Some Strides as the Season Progresses

That learning process will be made up of a few steps that the team must show their fan base if they are to be taken seriously as a postseason threat. For a franchise that hasn’t made the playoffs since 2016, it’s more than fair to ask them to prove themselves before anyone gets too excited.

This is a good time to assess where this squad stands with 13 games remaining and an uphill battle ahead.

After falling to 1-3, the Detroit Lions desperately need a win this week in New England

After losing a 48-45 shootout against the Seattle Seahawks in Week 4, the Lions will travel to Foxboro to battle the New England Patriots. While this is not the same daunting task it once was, it’s still a road game against Bill Belichick. So the team, not surprisingly, opened up as 2.5-point underdogs.

While it might sound strange to call this a must-win scenario, a victory here would send a clear message. It would also help to right the ship a bit. An expected contender has dug itself a hole early in the season. Typically, teams on the fringe don’t have the talent to climb their way out.

Falling three games under .500 would be a sour note for the Silver and Blue, heading towards the remainder of the 2020 campaign. A victory sets the right tone; a loss starts sounding like the same old music again.

Quarterback Jared Goff has to be The Man

It seems strange that many people forget about Jared Goff‘s magical mystery tour to the Super Bowl with the Los Angeles Rams in 2018. Despite having a subpar performance in The Big Game, Goff should have been the team’s franchise quarterback for a decade. Instead, they cashed him in for Matthew Stafford. The rest, as they say, is history.

Essentially thrown on the scrap heap, many Detroit fans initially thought the best thing that came from that trade was the bounty of draft picks that were thrown in. But Goff has shown signs of a resurgence in early 2022. Through four games, he’s gone 92 of 151 for 1,126 yards. He’s also been careful with the football, tossing 11 touchdowns against just three interceptions. He’s also shown a quick release, having been sacked only five times thus far.

Goff will have to maintain this high level of play to allow for the growing pains of others. He’s got some reliable targets, most notably tight end TJ Hockenson. If he can continue to mix it up, Goff could be the one to finally lead the Detroit Lions to the Promised Land.

The young Lions need to run with the pack

This team has been built on draft picks – both their own and those they’ve acquired from others. While it’s not fair to put the weight of this season squarely on their shoulders, their most notable prospects need to grow up in a hurry. And at 1-3? That better be happening now if this team wants to win right away.

Second-overall pick Aidan Hutchinson registered three sacks in a game against Washington but hasn’t dropped a quarterback since. He could be a key down the stretch if he turns into the force the team hoped they drafted. Their other high-profile choice, wide receiver Jameson Williams, has been a non-factor due to rehabbing an ACL injury.

Regardless of who is in their youth movement, this team needs some of their hopefuls to stop hoping, and start performing right now. The team, and their playoff hopes, will likely be riding on it.

If the Detroit Lions can steal a few victories over the next few weeks, mature throughout the year, and peak at the right time? They just might be able to pencil their name into the 2022 NFL playoffs.