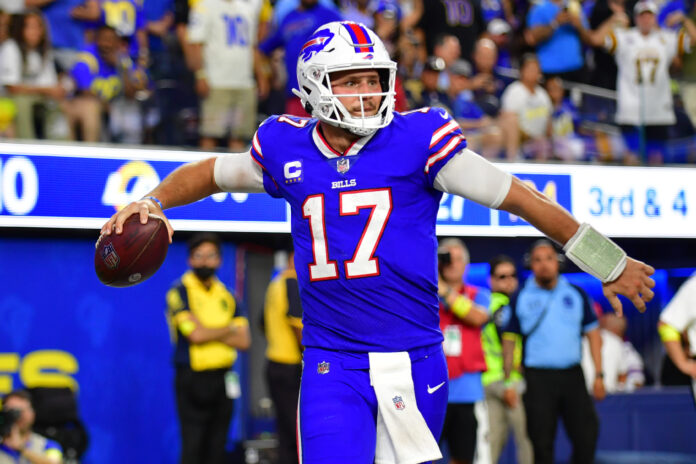 There was finally NFL football last night as the Buffalo Bills completely dominated the Los Angeles Rams in all facets of the game on opening night. Everything went right for the Bills last night on both sides of the ball while the defending champs fell flat on their faces. There were many great performances in the game, mainly from the Bills. The game got out of hand but everyone was excited to have football back on their T.V. last night as the 2022 season got underway.

Coming into the season, Josh Allen was the MVP favorite and we saw exactly why last night. He completed 26 passes for a combined 297 yards and three touchdowns. Allen did have two interceptions but one of them was a tipped ball that should’ve been caught. The 26-year-old not only got it done through the air but he got it done on the ground as the Bills’ leading rusher, tallying 56 yards and a touchdown. Allen left it all on the field, throwing clutch deep passes and laying his body on the line for a few extra yards. He is a huge reason why the Bills are Super Bowl favorites as well.

Josh Allen is the only NFL player since 1950 to have at least three career games with 250+ passing yards, 3+ passing touchdowns, 50+ rushing yards, and a rushing touchdown.@BuffaloBills | #BillsMafia pic.twitter.com/rLKBftYy2C

There weren’t many bright spots for the Rams on opening night but one positive was Cooper Kupp. Many view him as a top two wide receiver in the league, fighting for the top spot with Davante Adams. Kupp won the triple crown last season while leading the league in receptions, yards, and touchdowns and he got off to a great start in all three categories to start 2022. He gathered 13 catches for an impressive 128 yards and a touchdown. The touchdown was an incredible toe tap to stay in bounds, just one of many skills he possesses. Kupp is expected to have another outstanding year and this was just the start.

This TD grab by Cooper Kupp is absolutely ridiculous. pic.twitter.com/OwlbEGgWre

Stefon Diggs finished just six yards shy of Kupp for the leading receiver in the game. Diggs caught eight of his nine targets for 122 yards and a touchdown. Jalen Ramsey allowed a perfect passer rating at the nearest defender and Diggs was a huge part of that. It included a huge 53-yard bomb for a touchdown after he easily got passed Ramsey. Ever since Diggs joined the Bills, the connection between him and Allen has been one of the best in the league. That was just a glimpse of what’s to come for the rest of the season as he plays a huge part in his quarterback’s potential MVP season.

Stefon Diggs gets loose for the TD 💨 @brgridiron

The Allen/Diggs connection might be one of the best in the league but the importance of Gabriel Davis in this offense can’t be overlooked. He had two 500-yard seasons in 2020 and 2021, including seven (2020) and six (2021) touchdowns in respective seasons. Davis is expected to have an even better year than his first two and last night was an example of why. He caught four balls for 88 yards and a touchdown and made many key plays last night, including a 47-yard catch to set up the rushing touchdown from Josh Allen. Davis is poised for a breakout season in this offense and his performance on opening night was just the start.

FIRST TD OF THE NFL SEASON BELONGS TO GABRIEL DAVIS 💥​

The Bills were so good last night that the entire defense earned a spot on this list. Nobody could’ve drawn up a better opening night for the defensive unit than what they displayed. The Bills’ pass rush was relentless, recording seven sacks and getting pressure all night. That forced Matthew Stafford to make mistakes all night, including throwing three interceptions.

Arguably the best player on defense for the Bills last night was Von Miller, who was brought over in the offseason after helping the Rams win a Super Bowl. He tallied two sacks and three tackles for loss. That opened the lanes up for Jordan Phillips (1.5 sacks), A.J. Epenesa (1.5 sacks), and Greg Rousseau (1 sack) to get in the backfield. Boogie Basham had a sack but he also recorded one of the three interceptions for the Bills. As said before, this Bills’ defense has been one of the best in the league over the last several years and this year will be no different.

Bills defense got a total of 7 sacks tonight without blitzing on a single play💪 pic.twitter.com/gQAfFHiUFU

Josh Allen, all day, every day.

ABOUT US
wpDiscuz
1
0
Would love your thoughts, please comment.x
()
x
| Reply