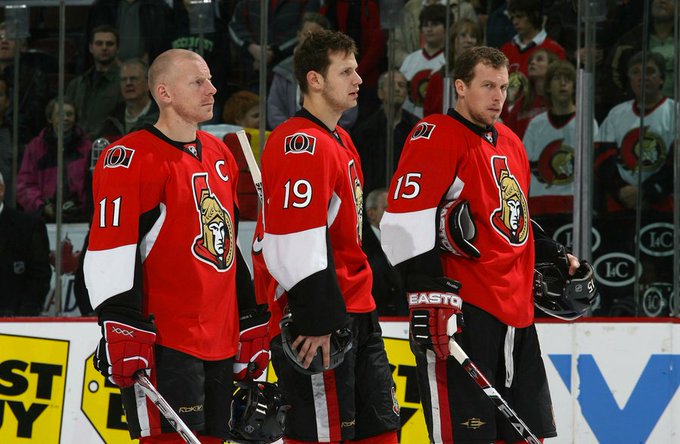 One of the most dynamic duos of the 2000s, Pavel Datsyuk and Henrik Zetterberg both broke into the NHL with the Detroit Red Wings just as the team’s dynasty of the late nineties was coming to an end. Despite playing the majority of their first few seasons down in the lineup behind hall-of-famers like Yzerman, Federov, Shanahan, Hull, and Robitaille, they still managed to lead the Red Wings in points for the 2000s.

Both Datsyuk and Zetterberg were wizards with the puck, making highlight-reel plays on a regular basis. The Red Wings never missed the playoffs when both players were on the team, and the pair led Detroit to a Stanley Cup Victory in 2008. Zetterberg led the 2008 playoffs in points, recording 27 points in 22 games. Though they were both hampered by injuries, the pair combined to score 1067 points in 1112 games during the 2000s.

Martin St. Louis and Vincent Lecavalier could not have had more opposite starts to their NHL careers. Lecavalier was drafted first overall in 1998 by the Tampa Bay Lightning, and St. Louis wasn’t drafted at all. However, both had incredible individual success with the Lightning during the 2000s. During the decade Lecavalier won the Rocket Richard Trophy and the King Clancy. St. Louis won the Art Ross twice, the Lady Byng three times, and the Hart Trophy and Pearson Award in 2003-04.

The pair was also able to lead the Lightning to the team’s first playoff berth in 2003 and the team’s first Stanley Cup win in 2004. However, the team experienced limited playoff success during the rest of the decade. Despite the lack of team success, the pair put up 1303 points (including 551 goals) in 1410 games for the Lightning over that time, the most points out of any duo for any one team during the 2000s.

The only player who was also on my Top Duos of the 1990s list, Joe Sakic paired with Milan Hejduk to score goals for the Colorado Avalanche at a ridiculous pace during the 2000s. Together they each averaged 0.42 goals per game (507 goals in 1201 games), the highest rate of any duo who combined for at least 750 games over that stretch.

Colorado had a high level of playoff success in the 2000s, winning the Cup in 2001 and advancing to at least the second round four more times, but the team started to drop significantly in the standings towards the end of the decade. Back injuries finally led to the end of Sakic’s career after the 2008-09 season. Along with being the Avalanche’s highest-scoring duo of the 2000s, Sakic and Hejduk are also the team’s all-time leaders in points and goals.

Daniel Alfredsson, Jason Spezza and Dany Heatley. A great line. Their skills complemented each other so well.

The Ottawa Senators were a force in the early to mid 2000s. Daniel Alfredsson and Jason Spezza were two-thirds of the infamous “Pizza Line” that wreaked havoc with goaltenders across the league. The paid led the Senators to multiple first place finishes in their division (and a President’s Trophy in 2003) and several deep playoff runs, including going to the Stanley Cup finals in 2007. Unfortunately, after the 2006-07 season, the team failed to experience the same level of success as earlier in the decade.

Alfredsson and Spezza, however, continued to produce at a high level even through the team’s struggles. Combined, the pair recorded 1198 points in 1138 games. They are the only duo during the 2000s to play at least 750 combined games and average over a point per game. Along with being the Senator’s highest-scoring duo of the decade, they are also the team’s all-time leaders in points and goals.

There were many great duos that I ended up having to leave off the list: Marleau and Thornton, Kovalchuk and Kozlov, Naslund and Morrison, Iginla and Conroy. Should any of these duos have been in my top 4? What do you think?