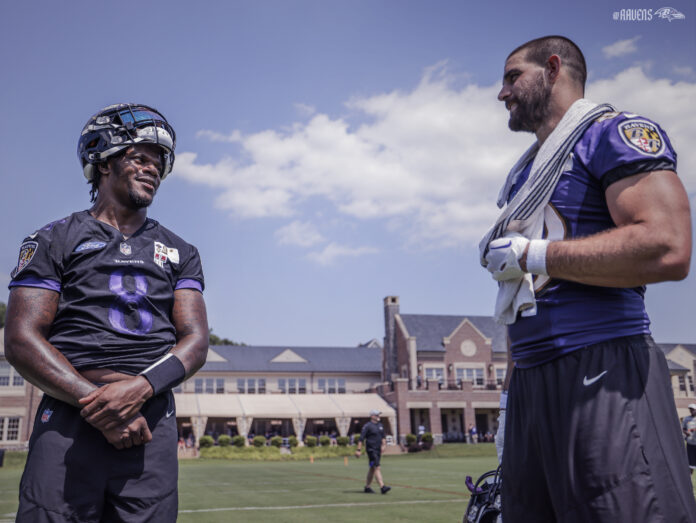 Every season, a few teams will make the playoffs after missing the season prior. Some of the teams are expected, while some come out of nowhere. The Cincinnati Bengals last season are a great example of a team that wasn’t expected. Nobody thought that offense would come together and be so dangerous that quickly. So the question is, who will be the next Cincinnati Bengals?

3 Teams That Will Make the Playoffs After Missing

There are a lot of factors that help a team into the playoffs or keep them from them, anything from unexpected injuries to key players to players having a breakout year that nobody saw coming.

The Baltimore Ravens and New Orleans Saints are two teams that have been consistently good that missed the playoffs last season due to injuries. They will both have a bounce-back year if they can stay healthy. The Miami Dolphins are a team that will be looking to build off of a much improved year last season and could be able to make the jump this year to the playoffs.

This @Ravens duo is dominant 🔥🔥 pic.twitter.com/1x5F7DQ2ko

The Baltimore Ravens were a Super Bowl contender heading into last season but were plagued with injuries. Even with all their injuries, the Ravens stayed in contention to make the playoffs. Ultimately, they finished 8-9 and last in a tough AFC North division.

I expect Lamar Jackson to have another great year. His ability to make plays with his legs will always be something that defenses will struggle with. He did lose Marquise Brown this off-season, but he still has Mark Andrews and I expect Rashod Bateman to slide into the WR1 role very smoothly in their run-dominant offense.

The biggest problem last season in Baltimore was pass defense. Their pass defense was atrocious, ranking dead last in passing yards allowed per game. The pass defense struggles were largely in part due to them losing both Marcus Peters and Marlon Humphrey to injuries. They also didn’t have great safety play. With the return of Peters and Humphrey and drafting Kyle Hamilton, you should expect the Ravens’ defense to play much better this season.

With the improvement of their defense and their offense that will still play at an elite level, you should expect the Ravens to get a wild card spot at the bare minimum. They will compete to win the division with Cincinnati, and I wouldn’t be surprised if Baltimore can end up winning that division.

The New Orleans Saints finished last season 9-8 and second in the NFC South. They just missed out on a wild card spot, and a big reason was the lack of offense after Jameis Winston went down with a torn ACL. While the Saints defense ranked fourth in points per game and seventh in yards per game, the offense was never able to get going consistently.

The Saints were missing Michael Thomas all of last season and added Chris Olave this offseason. Olave and Thomas will give Winston quality wide receivers to throw to, as he can hopefully play at a good level to push New Orleans into a wild card spot. Their defense will still be good after they signed safety Tyrann Mathieu. They also added Jarvis Landry as the Saints were able to bring two former LSU stars back to the state of Louisiana.

The New Orleans defense won’t have as much pressure this season to keep them in games, and that will be a key to the Saints season, having an offense that can help win games. The defense will be able to play even better if they are able to not be on the field all the time. If the offense can maintain control of the ball and put up some points, the Saints will have no problem making the playoffs. While they won’t win the division, they will get a wild card spot in a weak NFC.

Omar Kelly’s 10 reasons #Dolphins should be playoff-bound in 2022 https://t.co/4EDwAdgFUE pic.twitter.com/p0CMxTvxYw

The Miami Dolphins made a huge splash this off-season when they traded for Tyreek Hill. They also added a few offensive linemen during free agency to help protect Tua Tagovailoa. Miami finished 9-8 last season and third in the AFC East.

Miami’s defense was average last season, as they were in the middle of the pack in yards per game. The defense was still the team’s strong suit as the offense struggled at times. The front office went all in, however, to make sure the offense improved.

Miami will be a run-dominant offense that will use the run to set up play-action passes, more than likely. New head coach Mike McDaniel is coming over from being the offensive coordinator of the San Francisco 49ers. If he can mold this offense to a similar one as he had in San Francisco, Miami will be a force. He has an elite playmaker in Tyreek Hill at his disposal, and he will get creative to ensure he gets the ball. This will also help the defense not be on the field as much and better rested for when they are on the field.

While the Baltimore Ravens and New Orleans Saints are two teams that are expected to be playing for a playoff spot every year, they were unable to do so last season. Both teams you can expect to be playing into mid-January this year; however, as they can get healthy and jump back into the playoffs. The Miami Dolphins were able to use a seven-game win streak last season en route to a 9-8 season. You can expect them to also leap into the playoffs if Tagovailoa can become more consistent. He will be the x-factor for Miami as they fight in a tough AFC for a playoff spot this season.

3 for 3. Wouldn’t be surprised if the Jets challenge Miami for that Wild Card spot (since that division will be Buffalo’s). They had a great draft and free agency.

ABOUT US
wpDiscuz
1
0
Would love your thoughts, please comment.x
()
x
| Reply