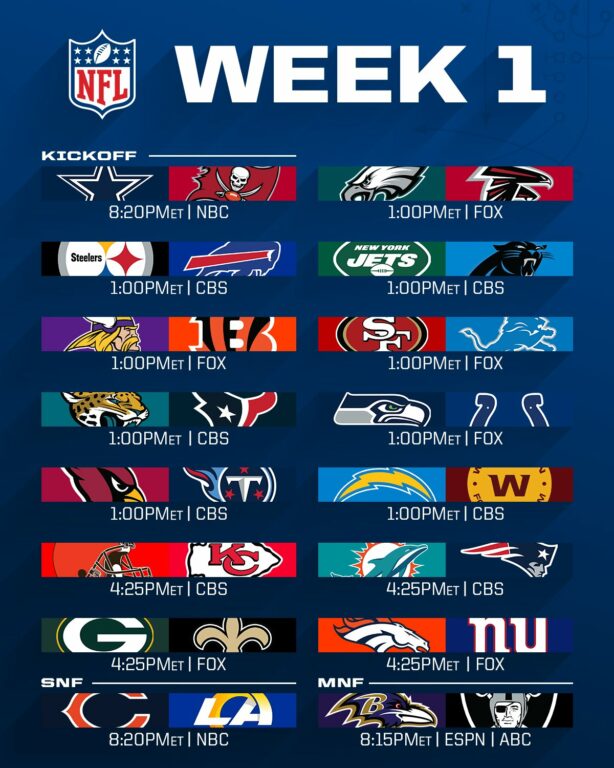 Yes, I know. It’s too early to be making NFL picks for the upcoming season. I mean, come on, we haven’t even seen full camps yet, just a couple of mini camps and some OTAs.

However, the Week 1 betting lines are out, so we might as well look around to see if there is any value to be had by jumping on the early lines. But before you get too excited, be sure to check the latest updates in legal online gambling to see if everything is good to go in your area.

Right away, I’ve spotted two lines that have some promise. So, let’s break them down and see.

Most of the time, the Super Bowl winner has a bit of a hangover the following season. But for guys like Tom Brady and Rob Gronkowski, it’s just business as usual. Terrible Tom and the Tampa Bay Buccs are going to strike hard and fast and do everything they can do to get set up for another Super Bowl run.

The betting line is now -6.5 in favor of Tampa Bay, and I actually like this number — though I liked it better when they were -6. Although it’s not a small point spread, it’s still under the key number of seven. The only thing that makes it a little scary is the fact that the Cowboys are back at full force. That said, even before Dak Prescott went down, they didn’t seem to be ‘gelling’.

Well, the Cowboys scored just 19.63 points per game on the road last season. Meanwhile, the Buccaneers put up just a hair under 29 per game at home. On top of that, the Buccs’ home defense lines up with the Cowboys’ road capabilities, allowing 22 per game. So, the difference comes down to seven points.

Grading Cowboys’ position groups: Why this Dallas offense will strike fear in every defense it faces | @JohnOwning https://t.co/ZSnhScXMm9

This will be an exciting AFC clash between the Buffalo Bills and Pittsburgh Steelers. However, I have to admit that this is one that I am not going to pull the trigger on right away. I still want to see what the deal is with Big Ben before making a decision that involves my wallet.

That said, the line is moving in the direction I prefer. This one opened with the Bills as -6.5 favorites and is now down to -6. We may even see it move to -5.5 before this thing kicks off. When that happens, I can almost guarantee that sharp money will come back on the Bills side and move it almost immediately back up to -6. So, if the line dips under 6 points, that is my market indicator of when to buy in on the Bills.