It may be obvious to even the most casual fan of the Vancouver Canucks that something is amiss in the locker room. The shocking and candid Quinn Hughes comments are rare but not unheard of from a young player. Especially when said comments appear to be shot across the bow of what is technically your boss’ boss.

"We have a lot of new pieces, we lost a lot of players from last year."

In the age of social media, these comments spread across the league’s network of old boys clubs like a California wildfire. It wasn’t long before reporting from the center of the hockey universe caught wind as well.

.@FriedgeHNIC: It’s gone so sideways that I don’t know where to start. The Quinn Hughes comment last night was a whopper. I had people from other teams sending me that quote asking if it was accurate or misquoted. That one caught the eye of people.

Reading between the lines of the Quinn Hughes comments, clearly the locker room shuffle has not gelled like it was intended to. That being said, it doesn’t make up for some of the lackluster performances this team has churned out recently. It doesn’t make up for the number of mistakes and turnovers they have been making, either. According to morehockeystats.com, the Canucks lead the league in giveaways vs takeaways in the offensive at +99 and the D zone is nearly just as bad at 26th overall in takeaways vs giveaways at -53.

In the pandemic-shortened season where the players are essentially holed up at home or in a hotel (sounds familiar), there is no way to escape hockey and every win/loss is amplified. As the losses pile up for the Canucks, pressure builds all around. Certainly, the much-maligned GM deserves the lion’s share of the blame. Letting those key free agents walk while replacing them, on paper, seemed like they were poised to at least be competitive in the temporary aligned North division.

If ever there was a season where a team sure could have benefitted from a preseason it would have been this one. Still, players play the game, coaches coach, and the GM and front office assemble the team. Whether you agree with the current construction of the team or not, this has been debated relentlessly on local radio and social media where there are two clearly defined camps. Either way, in what is an anomaly season of temporary realignment, lockdowns, and no fans at the rink, all eyes were watching to see if the team could weather the storm intact until the off-season.

I have full confidence in Jim, Travis, and this group. I have no plans to make changes. #WeAreAllCanucks

Not surprisingly, fickle fans and media in Vancouver turned their outrage from the front office to the head office. Some going so far as to renounce their season tickets for when play resumes in front of fans. The chances of this happening are likely near-zero as there is a long waiting list for Canucks season tickets. With fans being pent up at home for over a year now, regardless of the product on the ice, the demand for ticket sales is bound to be high for next season, at least. It is up to the team to prove if they are worth the fan’s hard-earned money.

Some players interviewed after Hockey day in Canada’s Saturday win claimed to be unaware of the tweet thread. Having that vote of confidence publicly – and likely internally – should be all the players need to start to play for each other and repair their losing ways. The question remains, though. Can this group get back to their winning ways that were last summer’s playoffs, or do they fall back to Earth and end up outside the playoff window with yet another offseason of fans and management playing with draft lottery scenarios looking how they can improve by next season?

Since The Quinn Hughes Comments

Since Hughes’ (or Huggy Bear as he is affectionately nicknamed by his teammates) shockingly candid comments, the team has gone 1-2-2. With the 2 OTL’s being late-game comebacks only to get beat just seconds into OT leading to this tweet:

Sutter: "These moral victories, they dont count. This sucks" #Canucks

He’s right on both accounts: the moral victories don’t count and they do suck. 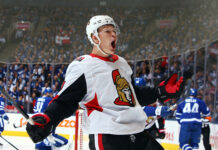 Who Will Be The Ottawa Senators’ Next Captain? My Top 3 Candidates