This year’s class features lots of high upside prospects and phenomenal athletes especially on the offensive side of the ball. This includes the most important position in football: quarterback. Many analysts predict that as many as five quarterbacks will be drafted in the first round. Who are they? Here are the top five quarterbacks in the NFL draft.

Lawrence has all the skills and traits that are desired in a quarterback by general managers. In terms of intangibles, Lawrence is a hard worker and a great leader which showed when he led the Clemson Tigers to a victory in the 2019 CFP National Championship game. That is just one of his many achievements on his resume. He was also the MVP of the National Championship game, alongside being a three-time ACC champion, Heisman trophy runner up in 2020, and many others.

Aside from being a great leader and winner, Lawrence also has extraordinary skills. He is strong in the pocket, considering he’s 6’6”. He has a strong arm that pairs up with his accuracy, as his completion percentage has never dipped under 65% in college football. Additionally, he has great mobility which helps him get out of pressure and pick up first downs. Lastly, he is also very intelligent and reads the field well, which is a result of three years playing college football.

In those three years, his numbers were outstanding. He threw for 10,098 passing yards, 90 touchdowns, and only 17 interceptions which is a 5.29:1 touchdown to interception ratio. Other key numbers include him rushing for over 943 rushing yards and 18 touchdowns, which gives him over 100 total touchdowns in his college career.

Trevor Lawrence has proved that he is a superstar in college, and there is no reason that he shouldn’t transition well to the NFL. With that in mind, Trevor Lawrence is deserving of being the number one overall pick.

The second-best quarterback of the top five quarterbacks in the NFL draft is Zach Wilson. This, to some, is controversial as they believe that Justin Fields should be ahead, but I think differently. Zach Wilson was one of the biggest risers this past year, as he skyrocketed from round to round until eventually being in the conversation of being drafted in the top three. Why did Zach Wilson’s stock skyrocket?

Well, the best way to answer that question, is to find the best word to describe Wilson and that is electric. Zach Wilson was a dominant playmaker this year and to put it into millennial terms, he was a baller. Zach Wilson is known for a strong arm, but most importantly his downfield accuracy is considered to be one of the best in the country. That though isn’t the real reason why he soared up in the draft.

The real reason that he is such a playmaker and rose in the draft is because of his legs. He had many highlight-reel plays where he got out of pressure and scrambled or just threw on the run. His legs helped him get 254 rushing yards this season along with an impressive 10 rushing touchdowns. Besides those rushing stats, he also had 3,692 passing yards and 33 touchdowns with only three interceptions.

Looking at this season alone and at his numbers, Zach Wilson was fantastic, and he was also very consistent. The only concern about him is his level of competition. Playing for Brigham Young University meant that he didn’t play against great defenses. But he didn’t just play well; he dominated. What I mean is he didn’t just score 30 points, he scored over 50.

A quarterback of this caliber shouldn’t escape out of the top 10. I mentioned before that many people prefer Fields over Wilson. That’s fine, but if I was a general manager, I would take Zach Wilson over Fields. Even if Fields is taken ahead of Wilson, Wilson will be the next quarterback drafted.

In the middle of the pack of the top five quarterbacks in the NFL draft is Justin Fields. After an elite sophomore season that consisted of 41 passing touchdowns and three picks, Fields declined. Before the season, Fields was in the conversation of potentially being drafted ahead of Trevor Lawrence, but now by many, he isn’t considered to be the second-best quarterback in the draft.

One of the reasons for Justin Fields’ decline was the schedule. Due to the coronavirus, Fields played in a limited amount of games, but there was a wide range of varying breaks between games, so Fields never found his rhythm. The biggest knock on Fields though is his decision-making in the pocket which correlates with his pocket awareness.

Fields holds on to the ball too long in the pocket. He feels like he can do that because he is so athletic and thinks he can escape, but this doesn’t work often. This decision making in the pocket against pressure will have no success in the NFL. Also, Fields in general played poorly against very good defenses he had to face like Indiana’s and Northwestern’s.

Even though there are concerns, there is no doubt that Fields is good. He is a freak athlete, and actually might be the best athlete of all the quarterbacks. His athletic abilities allowed him to throw for 67 touchdowns and 5,701 passing yards. A very desirable trait of Justin Fields is his dual-threat ability as he had 1,133 rushing yards and 19 rushing touchdowns in his college career.

Justin Fields should be one of the top three quarterbacks drafted because he is extremely talented and athletic, but make no mistake, there is definitely bust potential with him.

The fourth quarterback of the top five quarterbacks in the NFL draft is Trey Lance. Lance is probably the most interesting quarterback prospect and he might actually be the biggest wildcard of the first round. He is the quarterback and in general, NFL prospect that has the most boom, but also bust potential.

Trey Lance played one full year and one game in 2020 for North Dakota State University. Right off the bat are two concerns. First off, Lance is very inexperienced as he had only 318 pass attempts. Secondly, he played against poor competition. His accuracy has also come into question after he had a 50% completion percentage in his showcase game this year.

That was all the bust potential, now let’s transition into the boom potential. Lance has a big arm and he makes plays with it as he had a mind-blowing 28:0 touchdown to interception ratio in 2019. The most intriguing aspect about him though is his rushing abilities. He is freakishly athletic and by that I mean he rushed for 1,325 rushing yards in college while 1,100 of those came in one season. By those numbers, it can be said that Lance is probably the best dual-threat quarterback in the draft.

Lance has a very high ceiling and he is a dual-threat quarterback which is the newest and most modern evolution of quarterbacks now. He can most definitely run and scramble. He has a big arm, but can he improve his accuracy and can he improve his reading of defenses. In general, if he can become a true passer, not just a runner, then he will be a future star in the league for many years.

The final quarterback of the top five quarterbacks in the NFL draft is Mac Jones. Mac Jones had a Joe Burrow type season. Before the season he got some attention because he played for Alabama, but not a lot of analysts thought highly of him. He proved them all wrong as he led Alabama to a National Championship while picking up multiple awards along the way like the Johnny Unitas Golden Arm Award and Davey O’Brien Award.

Most importantly, besides him being the National Champion, this season Mac Jones was the runner-up for the Heisman. If not for his fellow teammate DeVonta Smith who was explosive throughout the season, then Mac Jones would have won it. Jones was nothing short of great this season.

Jones threw for 4,500 passing yards, and 41 touchdowns with only four interceptions. This is more impressive considering that he also had a 77.4% completion percentage and he led the nation in quarterback rating, which was the highest in a long time. Pro Football Focus actually handed him a grade of 95.5 which was the highest they have given out.

Skills wise Mac Jones is solid but not as good as the others. He doesn’t have the biggest arm, and he also isn’t mobile. As I mentioned he played for Alabama, so many are concerned that he put up those monstrous numbers listed above, because he has an NFL like talent surrounding him. He has been labeled by many as a product of the system.

It can’t be denied that Mac Jones has lots of support around him, but he also has some impressive traits. He is a very intelligent quarterback as he reads the defense well. He is also very accurate, especially on the deep ball. The most fascinating aspect that Jones has which no other quarterbacks in the draft do as well as him, is hitting receivers in stride.

This might be overlooked by many, but it is very important. He anticipates where the receiver will be, and he doesn’t throw it behind his receivers for let’s say a 10 yard gain. By hitting his receivers in stride, he allows them to be playmakers, and they can get seven-plus yards on top of that 10, just because they got the ball in stride. 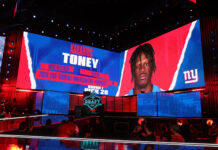