As Shane Lang predicted late last year, this season, the NHL will look completely different, with a whole new NHL structure to the games, the schedule and even the playoffs. The new rules have been agreed upon by all the participating teams, leading to the climax of the Stanley Cup in July.

The new season will be different in other ways too, with fans having to follow the games on NHL.TV via the official NHL app, as well as following the latest game betting on the Unibet app. So what will the new season look like and who will be playing where?

Instead of the traditional Eastern and Western Conferences, the new NHL structure sees the teams into four divisions for 2021: East, Central, West, and an all-Canadian North division.

Under the new schedule, teams will only play 56 regular-season games, instead of the usual 82. These games will all take place between divisional rivals, with teams in America playing each other eight times, and Canadian teams meeting up nine or ten times. The regular season will run from 13th January to 8th May.

At the end of the regular season, the top four teams from each division will advance to the playoff stage. This will still be inter-divisional, with teams seeded one to four. One will play four and two will play three over the best of seven games, with the winners of each playoff meeting to decide the divisional winner

The four divisional winners will then advance to the semi-final stage, where they will be seeded according to their regular-season points total. The Stanley Cup final will take place in early July over the best of seven games. The seventh game, if required, has been penciled in for July 15th.

Canadian fans are delighted with the new format, as it gives them the chance to see all their home teams competing against each other. It is the first time there has been an all-Canadian league since 1923, and it will no doubt rekindle long-standing rivalries between teams across Canada.

The other intriguing prospect is a Stanley Cup Final match-up between teams who would normally never face each other at that level. With the finals usually contested between conference winners, anyone in the same conference could not reach the finals together, and no more than two AFC or NFC teams could ever compete in the super bowl. However, under the new structure, all kinds of unusual match-ups are possible, with the exception of an all-Canada final.

The new season will certainly be different, and undeniably original in its pairings. Let’s just hope that the hockey on the ice is as good as the new structure is on paper. Who knows, if it all works out, this could become a blueprint for all future seasons. 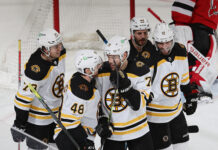