The Houston Rockets are one of the most innovative teams in the NBA. This is thanks to head coach Mike D’Antoni‘s small-ball philosophy. At the trade deadline this year, the Rockets traded their only legitimate big man, 6’10” Clint Capela. Since then, the Rockets have a 10-6 record and are in the fourth playoff seed. All with a 6’7″ Robert Covington being their tallest starter. Most recently, they beat the Milwaukee Bucks Sunday night by four points, and it was the defense that won the day for the Rockets. After the game, I debated to myself, “what is the Rockets’ ceiling?” In this piece, that’s what we will be trying to find out.

What Is The Houston Rockets’ Ceiling?

Rockets’ Ceiling Is Raised By Stars

In today’s NBA, if you have two superstars on your team, you’re a threat to win any game. Of course, the Rockets don’t have two ordinary superstars; they have James Harden and Russell Westbrook. Both are former MVPs of the league and they’re the ones who generate the offense for the whole team. Over this season, Harden’s greatness has shown with a jaw-dropping 34.4 points per game and improved defensive play from years past. In fact, Harden was the one who put the clamps on Giannis Antetokounmpo in the clutch on Sunday. Harden also has five 50 point games this year! So far in two regular-season games, Harden’s three-ball has struggled, but he’s still getting to the foul line as much as ever (he took 21 and 13 attempts in his two games). When Harden’s shot is crisp, he can take over a game offensively like few in NBA history.

And, luckily for the Rockets, they have a rejuvenated Westbrook as Harden’s co-star. After being ranked the 22nd best player, Westbrook responded with 31 points and eight assists in two games so far. But the tale of his dominance isn’t just in the bubble. In his last 35 games, Westbrook has averaged 30.7 points while shooting 51 percent from the floor. Against the Bucks, he was fearless attacking the basket while Harden struggled with fouls. While Westbrook is a poor shooter from deep, he makes up for it by stuffing the box score every time he takes the floor. He’s only the second player in history to average a triple-double over a season, and he’s done it three times now! As long as one of these two stars is on the court, the Rockets will continue to have the league’s top-scoring offense.

Rockets’ Ceiling Is Lowered By Lack Of Height

A benefit of playing small is getting points in transition off turnovers. The Rockets are fourth in steals and capitalize on it with 14.8 fast break points a game. However, when Capela was traded, the Rockets lost a whopping 13.8 rebounds per game. To combat this, the Rockets try switching on screens, but getting boards remains their biggest challenge. Against the Bucks, the Rockets were outrebounded 69 to 43. In nine out of ten chances, getting beat on the glass that bad usually results in a loss. What could be a concern for the Rockets is facing taller teams. The Bucks had their way in the paint, outscoring the Rockets by 40.

In the NBA right now, the big man has seen a resurgence. In the playoffs, the Rockets could have to go against Anthony Davis or Nikola Jokic. And, should the Rockets make the finals, the East has plenty of bigs as well. Whether they face the Bucks, Joel Embiid, or Pascal Siakam, Houston will give up points, and second-chance points in the paint.

But ultimately, the Rockets’ ceiling will come down to how well they execute on the perimeter. After all, they put up 44.6 three-point attempts a game (second highest in the league) compared to 46.3 tries from inside the arc (lowest in the NBA). But, many will be shocked to learn that the team ranks 23rd in three-point percentage. If Houston wants to reach its maximum potential, they’ll need to get hot and stay hot from downtown the rest of this season. So far in the bubble, Ben McLemore has been a phenomenal shooter off the bench. In fact, he shoots 40% on the year. Role players like Danuel House, Jeff Green, and P.J. Tucker will get tons of open looks through dribble penetration by Harden and Westbrook, and be counted on to make open shots.

Another important factor will be the health of Eric Gordon when he returns. Gordon was injured last Tuesday and the initial timetable was two weeks. In past years, Gordon was a major x-factor and sixth man of the year candidate. This season, Gordon’s efficiency dropped and his shot attempts lowered a little bit. But in the playoffs, having a veteran like Gordon who can play on both ends of the court is crucial.

Verdict: Conference Finals Is Their Ceiling

At the end of the day, the Rockets’ ceiling is the conference finals. Two former MVPs playing as well as ever is frightening. And when Gordon comes back, the Rockets will be able to use a fourth player off the bench and help balance the rotation. What holds them back in my eyes is matchups. As the four seed right now, they’d face the Jazz in round one, which is very winnable. But after that, they would run into favorite LeBron James, Davis, and the Los Angeles Lakers. If they upset the Lakers, they’d have a potential conference finals matchup against the Los Angeles Clippers. And the Clippers would be a nightmare matchup due to their stud defenders. The Rockets are massively talented and innovative, but their team isn’t complete enough for an NBA Finals birth quite yet. And that speaks to how immensely talented the NBA is in 2020. 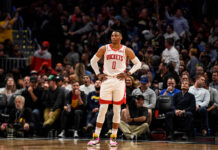 NBA Trades That Need To Happen This Offseason 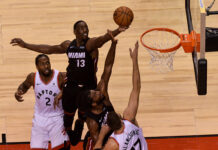 Taking A Look At The Miami Heat Offseason