The Houston Astros are putting down an early marker to win the World Series in 2019 as they have won nine of their last 10 games to take the lead in the American League West with a 12-6 record and, as a result, their odds have come crashing down in recent weeks in the outright market.

Two years ago, Houston defeated LA Dodgers 4-3 in a thrilling MLB World Series Final and they are on course for a return to the biggest series in world baseball, if the start to the campaign is anything to go by.

Bet on the Astros

The Astros can be backed at +600 in the sports betting for the World Series and that looks excellent value, especially if you consider they are set to win their division for the third consecutive year. Many online bookmakers have bonuses and welcome offers ($200 bonus at bet365 and a sign-up offer of up to $250 at 888sport for example) which should make this an even better bet.

Houston’s hopes of retaining their crown were ended in the League Championship Series last year as they were beaten by Boston Red Sox who were favorites in the match betting to win that tie as they were the number one seeds. The Red Sox went on to lift the World Series Trophy, defeating the Dodgers in the final 4-1.

The Dodgers (+750) and the New York Yankees (+800) will prove to be the biggest threats to the Astros this year, however, both of those teams have made average starts to the season, therefore, their odds have been rightfully pushed out by the bookmakers.

Take Khris Davis in the Most Home Runs Betting

Oakland Athletics’ Khris Davis topped the MLB in Home Runs with 48 in 2018 and he should be backed at +250 to do the same in 2019. Krush, as he is commonly known, is the best hitter in the game today as long as he stays injury-free this year, expect him to top the charts once again.

Davis is already off to a flying start as he has 10 Home Runs so far from his 20 games with the Athletics. Christian Yelich (+600) and Cody Bellinger (+600) are just behind Krush in the betting as they are tied with the Oakland man on 10 Home Runs too but those two players will struggle to keep up with the reigning champion as the year progresses.

Oakland is .524 for the campaign and if they fancy them to win the American League West this season, they are +900. The safer bet is for their leading talisman to light up the league again with some big hits in 2019.

Clayton Kershaw is considered to be the best pitcher in the MLB today and sometimes you cannot look beyond the obvious in certain betting markets. The LA Dodgers man is the +250 favorite to seal the Cy Young Award in the National League for what would be the fourth time in his career.

Clayton Kershaw's velocity and craftiness could be the key to his 2019 debut and rest of seasonhttps://t.co/rtg4mnpHu9 pic.twitter.com/gpmBr7lsJI

In 2014 Kershaw became the youngest ever player to win the award for the third time and since then he has been injury-plagued, most notably with a shoulder problem. The 31-year-old looks fit again now and could be set for a big campaign to help guide the Dodgers to another World Series final.

The race for the Cy Young Award in the National League is likely to include Max Scherzer (+325) and Noah Syndergaard (+600) but Kershaw is one of the few players in the MLB who has the X Factor and is able to produce special numbers at the end of the campaign.

There is a long way to go before the World Series is competed for in October, however, this is often the best time of the year to pick out some value in the betting so get your bets on now to help maximize your potential return. 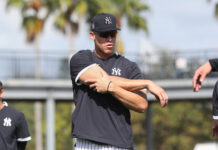