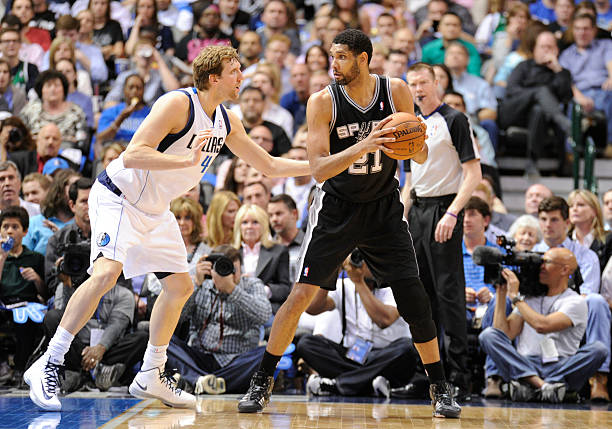 We continue our top five players in franchise history series with the San Antonio Spurs. The Spurs franchise has had quite the history of great players, particularly over the last 25 to 30 years. The franchise just completed a historical run from 1999-00 through the 2016-17 season. During this stretch, the Spurs won four NBA titles as well as over 50 games each season. The year prior to the streak beginning, they won the NBA championship in a strike shortened season. The Spurs franchise has simply embodied greatness over the years. With that being said, let’s take a look at the top five players in San Antonio Spurs history!

Manu Ginobili played his entire 16 year career in San Antonio. Despite starting only 349 out of 1,057 games played, he established himself as one of the most important Spurs players during their incredible run. His reliability, leadership and clutch plays are part of what made Ginobili so special. Therefore, Ginobili placing fifth on the list of the top five players in San Antonio Spurs history list is perfect.

Despite not having the advanced metrics that George Gervin possesses, Tony Parker is a good fit at third on the top five players in San Antonio Spurs history list. He meant so much to all of those 50 win Spurs teams. Parker was the point guard of four NBA championship teams. Additionally, he stepped up big time in the playoffs, increasing his scoring average by two points per game. He was also a clutch player all throughout his time in San Antonio.

David Robinson is clearly one of the top 15 to 20 players in NBA history. The Admiral put together a whale of a career in San Antonio. He was an outstanding defensive player, fantastic rebounder, great scorer as well as a powerful leader. Robinson averaged 23 or more points per game in seven of his 14 seasons in a Spurs uniform. That includes an incredible average of 29.8 in 1993-94, which led the NBA. Additionally, he averaged double figure rebounds nine times, which is amazing. He also averaged three blocks or more seven times in his career, including a league leading 4.5 in 1991-92. Robinson is certainly the perfect fit at number two on the top five players in San Antonio Spurs history list.

As great as David Robinson was, Tim Duncan was even better. The Big Fundamental was always recognized for his greatness, although underappreciated at times. Most likely that is because he was not flashy whatsoever. Instead, Duncan was so great fundamentally, hence the nickname. Duncan scored, rebounded, played great defense and was an underrated passer. The big man led the Spurs to five NBA titles during his 19 years. He stabilized and energized the franchise for the entirety of his career. Lastly, he was the quintessential franchise player for San Antonio. All of this, plus the numbers, make Duncan number one on the top five players in San Antonio Spurs history list.

These are the top five players in San Antonio Spurs history! Let us know what your top five looks like in the comments or on social media.